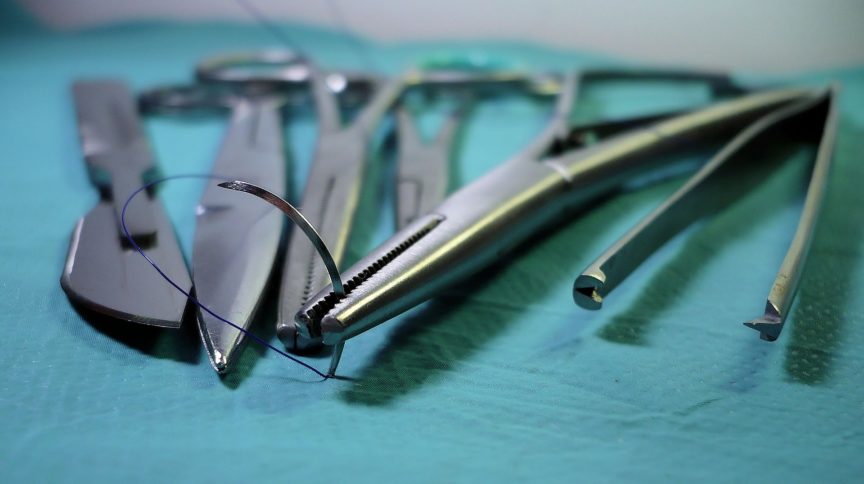 As a Thrombosis specialist, I am often paged by emergency physicians and orthopedic surgeons requesting anticoagulation reversal in order to facilitate surgery. There are some simple and important points to remember when dealing with this clinical scenario.

It is 8am on Monday morning and you are the orthopedic resident on call today. The night resident asked you to review the 83-year-old woman who presented to the emergency department after falling out of bed during the night. She has an intertrochanteric hip fracture and will require surgical fixation of the fracture as soon as possible.

The patient is confused. You notice on the electronic medical records that she was diagnosed with a deep vein thrombosis (DVT) of the opposite leg 4 months ago. The residential home where she lives supervises her medications and have sent a copy of her drug administration chart. She is prescribed rivaroxaban 20mg daily. Her INR is 1.6.

Risk of bleeding with hip surgery

Hip surgery is associated with blood loss in the range of 1.5-2.5L 1. Approximately half of the patients undergoing  hip fracture surgery require a blood transfusion 2 3. Over the past decade, there has been a concerted effort to reduce the volume of blood loss in these patients, since excessive bleeding is associated with a higher risk of postoperative death, postoperative comorbidity (such as acute coronary events and acute kidney injury), as well as wound infections and dehiscence. Administration of tranexamic acid during surgery is now standard practice. Patient blood management programs and intraoperative cell salvage are becoming increasingly more common with the goal of preventing unnecessary transfusions.

Should the patient receive a reversal agent? 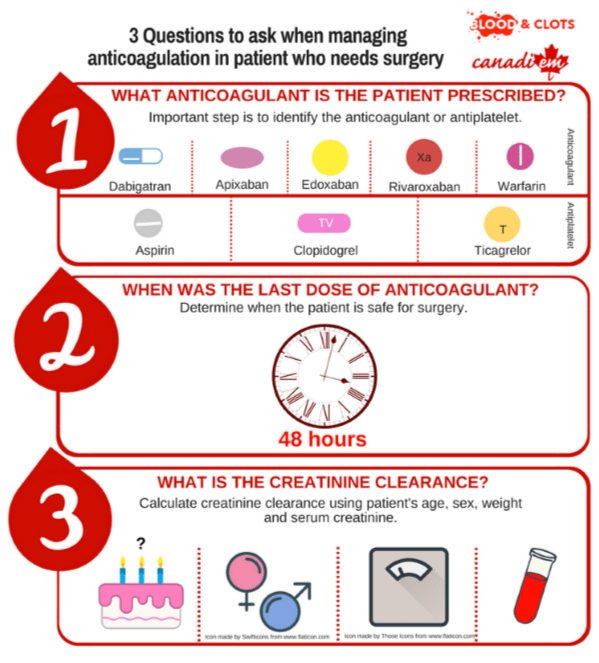 There are three key questions to ask when managing anticoagulation in a patient who needs an urgent surgery or procedure. Please see Table 1 below for details.

The patient had a creatinine clearance of 50 ml/min. Her rivaroxaban was stopped and her surgery was booked for two days later. She started rivaroxaban 10mg daily on day 1 postoperatively, and on day 5 postoperatively, she resumed her normal dose of rivaroxaban (20mg daily). She required two units of blood during surgery and had an uneventful recovery.

Answer: There is no approved reversal agent for rivaroxaban, apixaban or edoxaban (although Andexanet may become available in the near future). In the case above, the orthopedic team had to wait for 48 hours after the last rivaroxaban tablet was taken before performing surgery.

Idarucizumab is given IV to reverse dabigatran.4 However, if this woman had been taking dabigatran, I would not have given her Idarucizumab because her surgery is urgent (not an emergency and not life saving). Additionally, she was diagnosed with DVT of the other leg 4 months ago. Hip fracture surgery has a high risk of venous thrombosis and emergency reversal of dabigatran has a risk of recurrent thrombosis.

If the patient was prescribed warfarin instead for the DVT, she should be given vitamin K 10 mg IV which will bring her INR down to <1.4 in 12 – 24 hours. I would not reverse her with prothrombin complex concentrate (PCC, such as Octaplex or Beriplex) because of the inherent thrombotic risk with hip surgery in combination with the risk of recurrent thrombosis with PCC.

Question 2:  Can I use the INR or aPTT to monitor the anticoagulant effect?

Some hospitals can run anti-Xa assays, which are calibrated for rivaroxaban or apixaban. In general, these assays cannot be ordered routinely and currently have a limited role in assessing clinical anticoagulation effect. Anti-Xa assays do not measure the effect of dabigatran.

This post was reviewed by Mark Woodcroft, Teresa Chan and copyedited by Rebecca Dang.