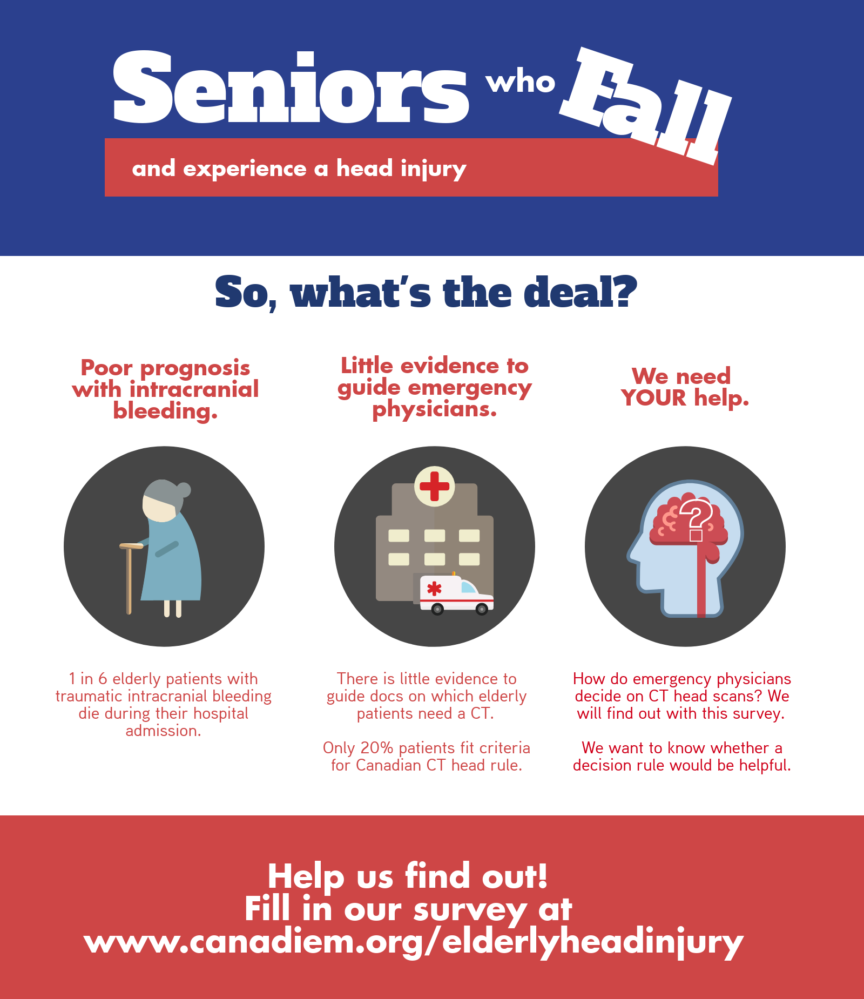 Intracranial bleeding in seniors who fall – a growing problem with no research evidence. The Falls Consortium researchers would like to capture the variation in approach to emergency department senior patients who present after a fall. Please take 5 minutes to complete our survey.

Click here to provide your approach to emergency department senior patients who present after a fall!

This morning, I reviewed Mr. Barker in the emergency department. He had a fall at home. He thinks he fell last night, and his daughter found him on the floor of his bedroom this morning. He can’t tell me much about why he fell, but he remembers not being able to get himself up off the floor. He was incontinent of urine overnight. Currently, he is disoriented and has a bruise on the left temple. He looks frail, with a few bruises on his arms and legs. He is under-weight and his clothes are dirty.

Mr. Barker has type 2 diabetes, hypertension, coronary artery disease, atrial fibrillation and chronic kidney disease. He had an episode of congestive heart failure a few months ago and was admitted to hospital for two weeks. He was started on rivaroxaban anticoagulation during this hospitalization to prevent stroke. His aspirin was stopped at that time.

I ordered a CT head which showed generalized cerebral atrophy and evidence of microvascular ischemia. There was no intracranial bleeding.

In 2016, 17% of the Canadian population was over the age of 651, yet they accounted for 22% of emergency department patients2. By 2036, seniors will account for a quarter of our population1. This is the future of emergency medicine.

In 2015, the Canadian Medical Association called for the development of a national seniors strategy that would include evidence-based hospital practices that better meet seniors’ physical, cognitive and psychosocial needs3. In 2018, there is a striking lack of evidence to guide senior emergency care.

The Canadian CT head rule11 can be applied to patients giving a clear history of head impact, if the patient verifies there was loss of consciousness, disorientation or amnesia. Our local data shows 80% of seniors who fall do not fit this category. It is not possible to order a CT head on every senior who has had a trip or fall. Quite apart from overloading the radiology department, there is often a delay of hours to the scan and many Canadian emergency departments do not have 24-hour access to CT scanning. There is a need for a structured decision tool to aid emergency physicians in their decision to order CT head scans.

We are a group of researchers working to develop a clinical decision rule for seniors who present to the emergency department after a fall. We are asking emergency physicians about their normal practice.

Thank you for taking 5 minutes to complete this important survey with a goal of helping us to improve the care we give these patients.