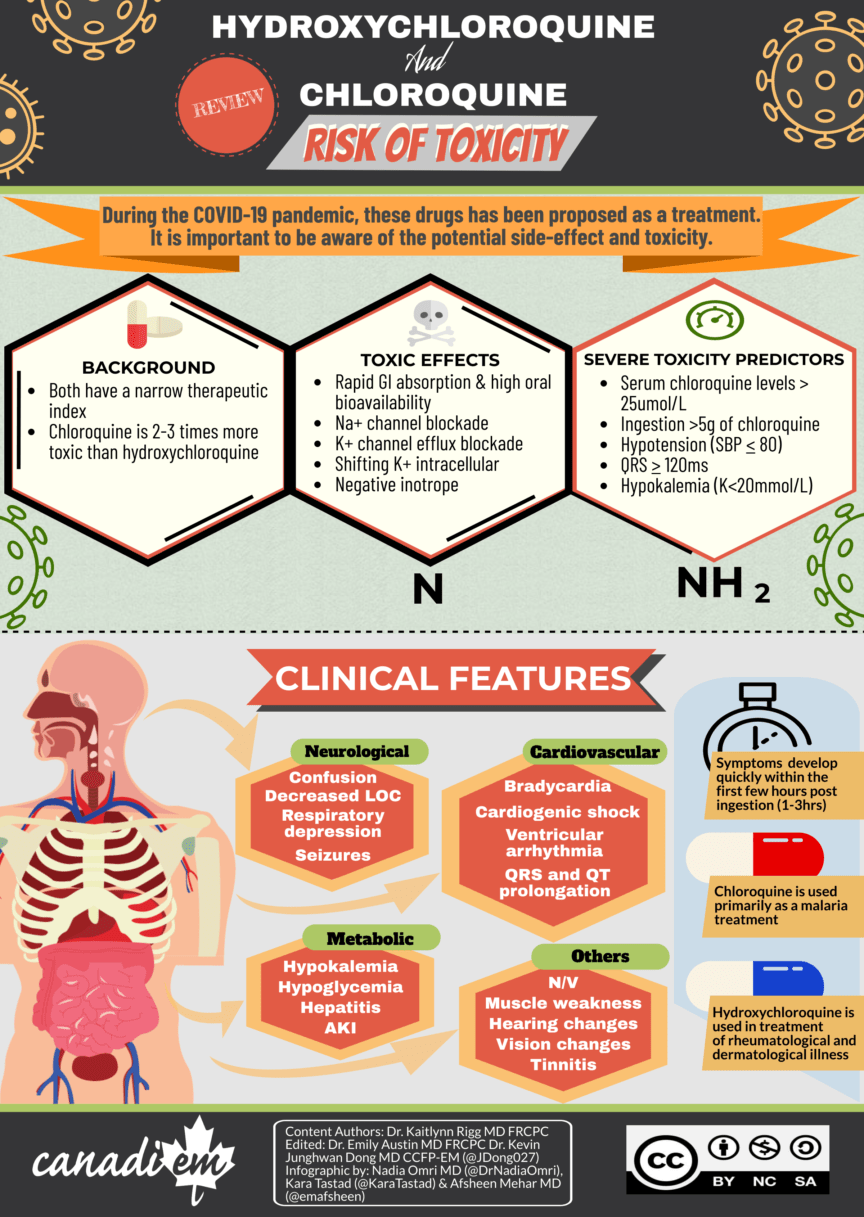 During the COVID-19 pandemic, there have been many attempts to find treatments for the virus. One of the main medications proposed for treatment and very prominent in the media has been the use of chloroquine and hydroxychloroquine. As many research studies are under way to evaluate the efficacy of this drug, we currently do not have robust evidence for positive clinical outcomes. However, there have been reports of individuals using these medications without the appreciation for potential toxic side effects resulting in accidental overdose and even death.

In this article, Dr. Kaitlynn Rigg, who is a board-licensed Emergency Medicine Physician and Toxicologist, reviews the hydroxychloroquine/chloroquine toxicity and how we can treat patients, who present with potential overdose.

A variety of toxic effects can be seen with hydroxychloroquine/chloroquine toxicity, these include:

When determining the severity of hydroxychloroquine/chloroquine toxicity, the following are often predictors of severe toxicity:

Symptoms of hydroxychloroquine/chloroquine toxicity develop quickly within the first few hours post ingestions (1-3hrs). Significant ingestions can show rapid progression to coma and cardiovascular collapse in this timeframe. Main systems involved in these clinical features include:

In deteriorating patients intralipid could be considered based on the drugs lipophilicity (log P 4.3) but little evidence exists to support its benefit. ECMO may be a better option if available as patients can survive neurologically intact if supported through the cardiogenic shock phase

Assessment and observation is recommended for chloroquine and hydroxychloroquine ingestions that fall outside of the normal therapeutic dosing range (due to narrow therapeutic index) or if:

Consult ICU for support if moderate to severe ingestion given high risk for rapid and precipitous for deterioration.

Always remember to screen for mental health and suicide risk in any patient presenting with overdose or toxicity.

This post was peer-reviewed and edited by Dr. Emily Austin MD FRCPC. It was edited by Dr. Kevin Junghwan Dong MD CCFP-EM and Kara Tastad.

Kevin Dong is an Emergency Medicine physician in Hamilton, Ontario. His interests include medical education, mentorship, and producing video/podcasts. He completed the Digital Scholar Fellowship in 2019 and he is currently the CanadiEM Director of Multimedia.