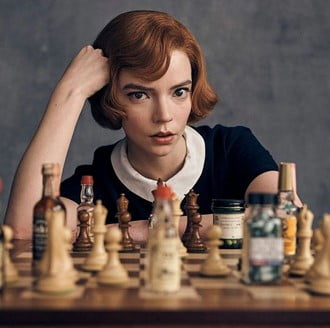 Beth Harmon is a 9-year-old female who presented to the ED from the Methuen Home, an orphanage, after a witnessed ingestion of “green pills” or Xanzolam. As reported by Headmistress Helen Deardorff, she swallowed at least a handful of the drug after stealing it from the orphanage’s pill jar. She then lost consciousness and fell off the chair she was standing on, dropping and shattering the pill jar.

We are unable to determine the exact number of pills she ingested as many pills were lost on the floor, but estimate that it was at least 20 times the therapeutic dose. Importantly, she receives Xanzolam daily as per protocol at Methuen Home as per standard orphanage care. However, a new state law recently banned giving children this medication, and in the days prior to the incident, she was observed to be in benzodiazepine withdrawal with symptoms of anxiety, agitation, and sleep disturbance.  Her friends suggested she took the medication to manage her withdrawal and was unaware of the consequences of taking such a large amount.

She is otherwise healthy. She has no known developmental deficiencies. In fact, one may even consider her as developmentally gifted – a genius in chess.

At the scene, the patient was found with minor scrapes on the left side of her face and with glass in her hair. Multiple pieces of glass and “green pills” were found on the floor around her and a handful of pills were located in the pocket of her pants.

She roused to touch and sounds, though she quickly fell asleep when not stimulated. GCS score on transfer was 12 (E3V4M5). No stridor was heard. Her respiratory rate, oxygen saturation and breathing were maintained. She looked well perfused and was not cyanotic on observation.

She presented to the emergency department by ambulance approximately 30 minutes post-ingestion.

The story of Beth Harmon in Netflix’s Queen’s Gambit intertwines the glamour of her illustrious chess career with her darker personal battle with addiction. Colloquially known as “Mother’s Little Helper”, benzodiazepines were developed in the 1950s and recognized for their anxiolytic and sedative properties. In the 1960s and 1970s, orphanages in the United States and Canada exploited these characteristics, administering the drugs to children to make their behaviour more tolerable.​1​ Beth’s story begins in the orphanage, Methuen Home, after her mother had passed away in a motor vehicle collision. It was here where she was told to swallow her daily “vitamins”.

These vitamins, or Xanzolam, bear an uncanny similarity in appearance to chlordiazepoxide (Librium), a long-acting benzodiazepine developed during the 1950s.

Benzodiazepines are a class of medications defined by their structure which includes benzene and diazepine rings.  There are many benzodiazepines available that differ by side chains, and pharmacologic characteristics (duration of action, metabolism, etc). Benzodiazepines interact at a specific site on the GABA- A chloride channel. The binding of a benzodiazepine to its receptor will result in the chloride channel staying open for longer, increased chloride through the channel and thus increasing inhibitory signaling.

From a pharmacokinetics aspect, benzodiazepines are well absorbed through the GI tract and quickly distribute to the CNS, accumulating there and in adipose tissue.​7​ Certain benzodiazepines are metabolized by the various p450 enzymes while some have active metabolites.

Clinical manifestations of benzodiazepine toxicity will include:

In a “textbook” case of an oral benzodiazepine overdose, the patient will present with a depressed level of consciousness and normal vital signs.

There are several important points that are specific to pediatric benzodiazepine toxicity.  In terms of epidemiology, increasing trends in adult benzodiazepine prescriptions directly correlate with a rise in pediatric poisonings (in younger children (0-6 years old). These children are typically due to unsupervised or accidental ingestions. Older children and adolescents are more likely to present with co-ingestants and more severe toxicity.​6​

Symptom onset typically occurs within 4 hours of ingestion in the pediatric population and less than 10% of patients will have respiratory compromise.​9​ Ataxia is the most common finding in children presenting with overdose and can often be the only clue of benzodiazepine toxicity.​10​ A detailed history should include all medications and substances that were in the home or environment. As with other pediatric overdoses, the emergency physician must consider the possibility of neglect, abuse, and sexual assault. Inquire about the caregiver’s situation and involve social services and other authorities as appropriate.

In this case Beth ingested a handful of benzodazepine pills, though an exact quantity was not obtained. As stated above, isolated benzodazepine overdoses are typically benign and treatment is largely supportive. Important elements of the history include the substance ingested, its formulations, co-ingestants, and the time the patient was last seen well . An AMPLE (Allergies, Medications, Past Medical history, Last Meal/Intake, Events) history should also be obtained. Physical exam of an intoxicated patient includes ABCDE (airway, breathing, circulation, disability, environment) with special attention to pupils, skin, muscle tone, and clonus.

Important tests that are part of the workup include point-of-care capillary blood glucose to rule out hypoglycemia, serum acetaminophen and aspirin concentrations, serum ethanol concentration, a serum osmolality, VBG, lactate, and an ECG should be ordered. Urine drug screen (UDS) requires a special mention here – notably,  it only detects benzodiazepines which are metabolized by oxazepam glucuronide (this excludes many benzodiazepines) and can be positive for up to 9 days. For these reasons, it may not be responsible for the acute presentation​11​ and should not be relied upon for decision-making in the ED.​9​ CT head can also be considered for intracranial pathology.

The cornerstone of management for benzodiazepine overdose is supportive care.  Consultation with a poison centre can be beneficial when there is uncertainty or the presentation deviates from what is expected. Should airway or breathing be compromised, an endotracheal tube is needed, however, this is quite a rare occurrence. Decontamination with activated charcoal is not recommended as sedation increases aspiration risk and supportive care is adequate in most cases. Enhanced elimination is not useful in benzodiazepine overdoses.

Of course, there is also the “antidote” – flumazenil.

Flumazenil is a competitive antagonist at the benzodiazepine binding site on the GABA-A receptor.  It reverses the clinical effects of benzodiazepines, and the “Z” drugs (ie. zopiclone), but will not counteract other GABA drugs that act on GABA such as barbituates and ethanol. While flumazenil effectively reverses benzodiazepine-related sedation, it has variable effects on respiratory depression.

The half-life of flumazenil is 50 minutes, which means symptoms of benzodiazepine toxicity can recur after initial reversal.  Typically, an intravenous or intranasal dose of 0.01 mg/kg, up to a maximum of 0.2 mg, is given over 15 seconds and can be repeated every minute to a maximum 0.05 mg/kg or 1mg until reversal of sedation is realized.​12​

Despite being an effective antagonist, flumazenil administration is not routinely recommended, especially in the setting of a patient with a drug overdose. There are two main reasons for this.

Relative indications of flumazenil administration despite these limitations include​12,18​:

In summary, the use of flumazenil is appropriate in a very select and limited group of patients, given its propensity to precipitate seizures and acute withdrawal, and the relatively benign clinical course of a benzodiazepine overdose.​6,7,9​

Since she joined the orphanage, Beth was given a dose of Xanzolam daily, although she frequently hid them to take sporadically for their hypnotic and sedative effects. The passing of a new state law prohibited their use in children and it was clear that after competing at the local high school chess tournament, she was in benzodiazepine withdrawal. This led her to break into the orphanage’s Xanzolam stash and overdose. She was found immediately and brought into the hospital.

It is important to note that she did not appear to intentionally overdose to harm herself, but to self-medicate. There were no obvious signs of head trauma, and she likely fell off the chair secondary to a vasovagal event after seeing Mrs. Deordorff. It would be reasonable to start with basic blood work including Tylenol and aspirin levels along with an ECG.

Beth’s overdose would be managed with observation and supportive treatment. Ensuring she maintained a patent airway is paramount, though the need for intervention is unlikely given that this is an isolated benzodiazepine overdose. Decontamination and enhanced elimination play no role in management. The antidote, flumazenil, was not invented until much later in the 1980s. However, even had it been invented during that time, her chronic benzodiazepine use would be a contraindication as it could trigger life-threatening withdrawal and seizures that would be difficult to treat.

She was discharged without sequelae, though banning her from playing chess and further developing her interests was a significant negative consequence of this event for her. Unfortunately, her struggles with addiction did not end here as she went on to suffer significant addiction and psychiatric issues. She may have said it best: “Creativity and psychosis often go hand in hand”.