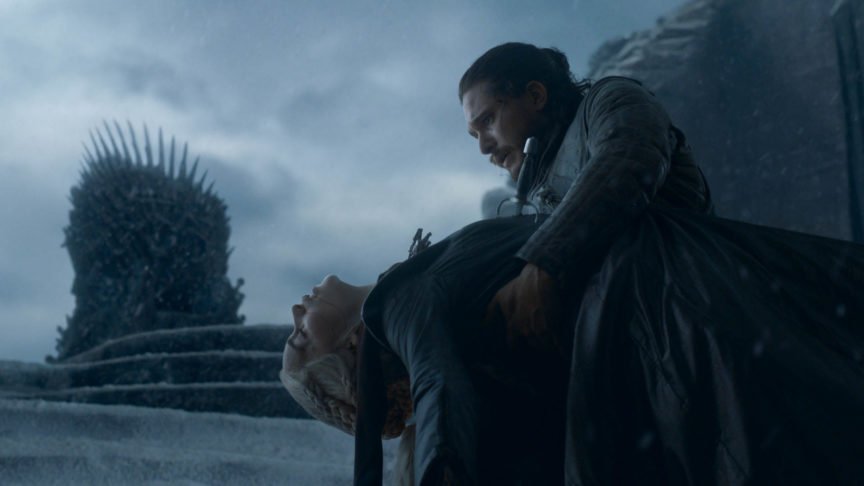 This post contains spoilers from Game of Thrones Season 8!

A 23-year-old female was seen unresponsive with a single penetrating wound to the left anterior chest. Witnesses identified the woman as Daenerys Stormborn, Mother of Dragons, and Queen of the Seven Kingdoms. The perpetrator was thought to be Jon Snow, who apparently survived his traumatic cardiac arrest. They were seen to be in an amicable stance before Jon took his knife with his right hand and plunged it into the left side of her chest. He withdrew the weapon and held her for a few seconds before she began to bleed from her mouth and nose. External bleeding was minimal. She became unresponsive 25 seconds after the injury occurred, and was placed on the ground by Jon.  Her body was carried off by her dragon, Drogon. No attempts at resuscitation were seen. Daenerys was presumed to be previously healthy, though her family tradition of inbreeding puts her at a higher risk of a multitude of genetic disorders.

It is not known if Drogon sought medical attention for the patient and physical examination was limited to observations at the scene prior to her transport by dragon. The patient appeared unresponsive with bilateral epistaxis and bleeding from the mouth. There was a single stab wound in the cardiac box but there is uncertainty regarding the depth of the wound as neither the weapon nor wound could be examined. Minimal blood was found at the scene. Vitals signs were presumed to be absent. Laboratory and radiological examinations were not performed.

No immediate medical interventions were performed after the injury occurred. The patient’s body was transported by Drogon to an unknown location. Given the speed of this mode of transportation, the patient could have reached medical attention quickly.

A wise Maester once said, “love is the death of duty.” The Queen’s life did not end on the battlefield, rather she was betrayed by her lover, Jon Snow who believed in a better world. This event marks the tragic end of Daenerys Stormborn, who was meters away from the Iron Throne when she suffered an isolated penetrating chest trauma. Penetrating injuries to the chest have 11-52% mortality depending on the severity and etiology of the injury.​1,2​ Assumed to be dead by many civilians, it is possible that she received care following transportation by Drogon. In this article, we will discuss treatments that could have led to her survival.

Advanced Trauma Life Support, if invented at the time, should be followed for this patient. This includes completing a primary survey, placing monitors/IVs, and performing point of care ultrasound (POCUS) to rapidly diagnose reversible conditions that could potentially save her life. Blood products should be on hold in case of great vessel injury. Given the lack of availability of a blood bank, a massive whole blood transfusion could be considered.​3​ Closed chest CPR would likely be less effective in this scenario given the traumatic nature of the injury, and in fact, in patients with cardiac tamponade, compressions may decrease diastolic pressures and coronary perfusion pressures.​4​ Given the rapid loss of consciousness, we speculate that she suffered from either great vessel injury or direct cardiac injury with or without tamponade.

Outcomes in penetrating chest trauma are strongly dependent upon the presence of cardiac tamponade. In 51 patients with penetrating chest stab wounds resulting in cardiac tamponade, the mortality of this group was only 8%.​5​ Inaba et al. (2015) showed no surviving patients presenting with an absence of pericardial fluid and cardiac motion.​6​  It is thought that tamponade is protective as it is reversible and can temporarily prevent exsanguination in direct cardiac injury. We are unsure if Daenerys suffered from tamponade, but if she did, it would confer her the greatest survival advantage.

Drogon was thought to be faster than any animal in the Seven Kingdoms. His speed would have likely allowed Daenerys to be transported to the closest Maesters within minutes. Dispatch and on-scene time were minimal and are strong predictors of mortality in trauma patients.​7​ If the Queen had access to blood products during her transport, it would have conferred her a significant survival advantage. Recently, Sperry et al. (2018) have shown that the administration of thawed plasma in air medical transport of 501 trauma patients decreased 30-day mortality to 23.2% when compared to 33.0% of standard-care resuscitation.​8​ Were Drogon to have brought Daenery’s to care quickly, it would have greatly increased her chance of survival.

Transport to a trauma hospital is important as certain interventions, such as the placement of intercostal drains and thoracotomy, are generally not preferred in the prehospital environment though there are some exceptions.​9​ Current indications for resuscitative thoracotomies include a prehospital resuscitation time of fewer than 15 minutes, and a presenting rhythm other than asystole unless there is cardiac tamponade.​10​ In this case, a clamshell approach may have the best chance at controlling the damage and to improve exposure and access to the heart. Furthermore, Flaris et al. (2015) showed the clamshell approach did not increase procedure time and allowed for faster control of cardiac injury.​11​

Despite the masses believing that Daenerys died by the dagger of Jon Snow, we hypothesize that her injuries may have been survivable. She may have suffered a penetrating chest trauma with injury to the heart, resulting in cardiac shock and a rapid decrease in consciousness. Exsanguination through this wound could be temporized by tamponade while Drogon rapidly flew to the nearest healer for a resuscitative thoracotomy. Pericardiotomy and damage control surgery may have repaired the damage and saved her life.

No whispers throughout the Seven Kingdoms can confirm nor deny this theory. Limitations of this hypothesis include knowledge of the healing powers of the maesters and their familiarity with techniques such as thoracotomies. With no confirmation of Daenerys’ death, we cannot safely predict the future of the Seven Kingdoms. We do know one thing for certain; if Daenerys does come back, she will not come back quietly. She has previously warned those closest to her that “If you ever betray me, I will burn you alive.”

This post was copyedited and uploaded by Evan Formosa (@EvanFormosa).