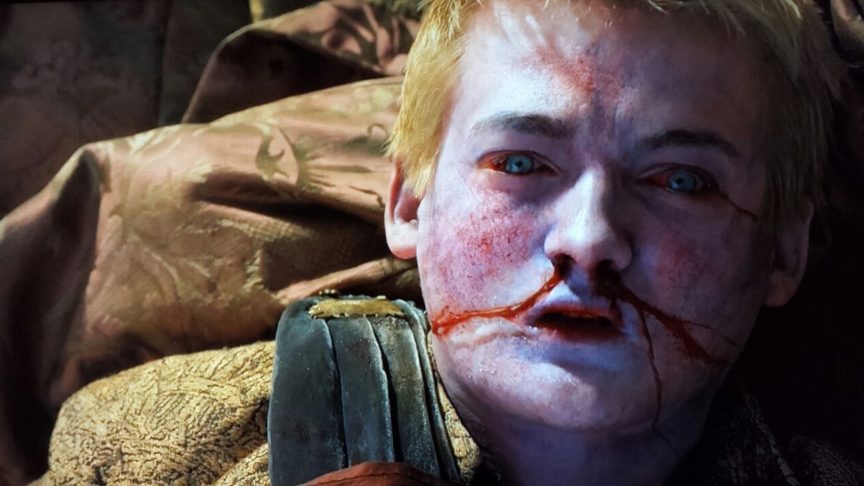 King Joffrey I Baratheon was found in respiratory distress by his mother, Cersei Lannister, and Jaime Lannister during his wedding to Margaery Tyrell. As this was the wedding for the King of the Seven Kingdoms, numerous guests and bystanders were present. The patient was eating a traditional pigeon pie and drinking from a glass of wine poured by Tyrion Lannister immediately prior to developing symptoms of dry mouth, severe cough, and shortness of breath. He attempted to finish the wine, at which point he fell forward to the ground gasping and choking. He proceeded to vomit and convulse for 55 seconds before going unresponsive and apneic, presumably into cardiorespiratory arrest. Prior to ingesting the wine, the wedding guests claim the patient did not appear intoxicated nor mentally altered. The time from ingesting the wine to cardiorespiratory arrest was 2 minutes and 50 seconds. Bystander resuscitation was not attempted.

The patient was unresponsive and did not respond to external stimuli. Bilateral subconjunctival hemorrhages, epistaxis, and facial petechiae were observed. Respiratory distress was noted immediately prior to arrest, leading to cyanosis. No external signs of trauma were observed. Vitals signs were presumed absent, but no one palpated for a pulse at any point. Laboratory tests and medical imaging were not performed.

The patient was turned face up, and his head was elevated to facilitate breathing. Due to the severity and rapid onset of symptoms, further attempts at resuscitation were deemed futile. The patient was presumed dead on scene.

This case report describes the fate of a young king following a dramatic assassination with the deadliest poison of the Seven Kingdoms. This poison “… makes the muscles of a man’s throat clench tighter than any fist. The victim’s face turns purple as the little crystal seed from which his death was grown, and so they call it the strangler.” Although Kings and Queens are commonly the target of poisons, common folk are susceptible to poisonings as well; it is among the top 3 leading causes of injury-related deaths in most countries.1 Overdose has become the leading cause of injury-related death in the US for people aged 25-64 in 20112. Here, we will discuss the specific management strategies of toxin-induced cardiac arrest and why we believe the resuscitative attempt (or lack thereof) for Joffrey demonstrated in this case was poor, even for a peasant, let alone the King of the Seven Kingdoms. He would have benefited from receiving proper supportive care with support from a Maester at King’s Landing and from emergency consultation with a Maester with expertise in posions.

While the epidemiology of toxin-induced cardiac arrest (TICA) is understudied, there is some evidence for improved survival in patients with TICA compared to patients with out-of-hospital cardiac arrest.3 TICA usually affect a generally younger patient population with fewer co-morbidities, such as diabetes and absence of cardiovascular risk factors. The availability of antidotes to reverse specific toxic effects may increase survival outcomes in certain TICA, for instance, the use of naloxone in opiate overdoses3. King Joffrey’s death due to his poisoning was not a fait accompli, and with appropriate management, it is possible he would have survived.

Ideally, Joffrey would have received aggressive cardiac and respiratory resuscitation according to the ACLS algorithms for pulseless arrest. If an automated external defibrillator had been invented at that time, Joffery could have been assess for ventricular fibrillation or pulseless ventricular tachycardia and been defibrillated. Whereas it is common to terminate resuscitative efforts in patients who are not responding after 20-30 minutes of ACLS, in poisoned patients with TICA, there may be a benefit to a prolonged resuscitation. In some case reports, prolonged CPR has been associated with recovery, possibly by end-organ profusion while toxins are cleared or redistributed.4,5

In certain poisonings, the timely administration of an antidote (in addition to aggressive supportive care and resuscitative measures) may increase the chance of survival. In this case, King Joffrey suffered symptoms from mixed toxidromes, and due to the lack of knowledge surrounding the strangler, it is unclear whether any antidote(s) would have changed the outcome. Although no known antidote was administered, Melisandre did survive an assassination attempt with the strangler, and as she consumed the poisoned wine, it was noted: “… fire cleanses. At her throat, the ruby shimmered redly.” It appears that her ruby necklace may have had a protective effect, but its magic is beyond the scope of this report. The following chart highlights some common poisons that could be attributed to Joffrey’s poisoning, with certain relevant clinical symptoms and the appropriate antidote:

Lipid emulsion therapy is also a potential life-saving treatment for the poisoned patient in cardiac arrest. The majority of evidence for lipid emulsion therapy is from treatment of local anesthetic toxicity, however, it has also been trialed in the management of many other mono- and multi-drug poisonings (of note, not with the strangler). The precise mechanism by which lipid emulsion therapy works is not entirely established. One theory is that of the “lipid sink”, whereby the administration of the lipid emulsion therapy creates a lipid phase in the serum, allowing the redistribution of lipid-soluble toxins away from the tissue sites.7,8 A second theory is that lipid emulsion therapy provides a source energy for the cardiac myocytes, in the form of fatty acids.6,7 The evidence of use of intralipid is limited, and based almost entirely on case reports. It may be appropriate to consider ILE administration in patients with toxicity from lipophilic drugs (as defined by a Log P >2). It has been shown to be effective in animal studies to prevent toxicities from a wide range of drugs including beta-blockers and calcium channel blockers, though human clinical trials are lacking.9 Importantly, there are several adverse effects associated with lipid emulsion therapy including lipemic serum leading to laboratory interference, fat embolism, pancreatitis, and acute kidney injury.10

Finally, the role for extracorporeal membrane oxygenation is being increasingly explored in the management of patients with TICA, who regain a pulse, but remain in severe shock despite all resuscitative efforts. While such an intervention requires significant resources and infrastructure (none of which were likely readily available at King’s Landing), efficacy in the management of patients with circulatory and respiratory collapse has been demonstrated, though risks such as limb ischemia, hemorrhage, and thrombus must be noted.11 In this case, should Joffrey had been resuscitated, but persistent in cardiogenic shock or hypoxic, ECMO may have increased his chance of survival since he was young and without comorbidities.11

Alas, it is possible that Margaery Tyrell could have still married Joffery had the appropriate resuscitative measures been attempted. Although the survival of patients following TICA is not favourable, good outcomes have been reported. In the pulseless, poisoned patient, high-quality CPR with consideration of specific antidotes is the mainstay of treatment. ECMO and lipid emulsion therapy are also promising therapies that may augment survival outcomes in Joffrey’s case. Collaboration with a medical toxicologist in the management of these patients is important.

There are significant limitations to this case report. A thorough clinical assessment was never performed, and the precise timing of events is not exact. Additionally, perhaps it was fate that Joffery was to die at the hands of Olenna Tyrell, Margaery’s mother, who admitted that it was “… Not at all what I intended. You see, I had never seen the poison work before. Tell Cersei. I want her to know it was me.” As authors of this report, we can only speculate about the fate of King Joffrey had he received appropriate and timely medical care, and the difference his survival could have made to the chain of events that lead to the Westeros we know today.

This post was copyedited and uploaded by Sean McIntosh.

This is another thorough and very entertaining Game of Thrones inspired overview! While it is unclear what poison \'The Strangler\' might represent in our modern world, many of the principles of management of toxin-induced cardiac arrest apply equally as well in Westeros as they do in our world. While there are numerous advanced treatments that have the potential to be used in this scenario, they require significant expertise to provide quickly and effectively (e.g. ECMO) which, beyond not existing in Westeros, may not exist in most of the modern world and have not been proven in this particular context (e.g. intralipid). However, as noted in the case, given the age of the patient it is certainly reasonable to provide the extent of care available.