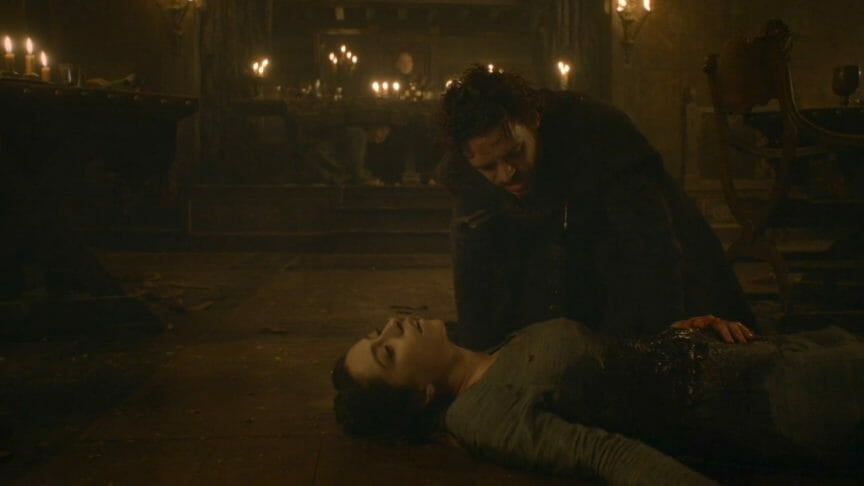 During the wedding of Edmure and Roslin, a young pregnant woman of unknown gestational age was found unresponsive with multiple abdominal stab wounds on the floor of the great hall at The Twins. Lord Frey allegedly planned a massacre of House Stark, and as soon as he signaled, an assailant stabbed her five times with a dagger in the upper abdomen. She was identified as Queen Talisa Stark, the wife of Robb Stark, whose own body was found just adjacent to hers. She had subsequently fallen to the floor and laid in supine position until being found in a pool of blood. An estimated >2L of blood was found at the scene. “The Red Wedding, they’re calling it. Walder Frey committed sacrilege that day…” as he slaughtered the people of House Stark. Her gestational age was unknown. Previous prenatal health was also unknown. There was no known previous history of pregnancy, caesarean section, or other abdominal/pelvic surgeries.

Patient was unresponsive to external stimuli and exhibited extreme pallor throughout her body. On visual inspection, the uterus appeared to be well above the level of the umbilicus, thus the fetus was likely of sufficient gestational age to be potentially viable. Anterior penetrating wounds were found bilaterally in the epigastric region of the abdomen. The exact locations of the wounds were not ascertained as clothes were not removed. The depth of the wounds were not measured; it is uncertain whether there was penetration of the uterus, fetus, and/or other abdominal organs. Fetal heart rate and movements were not examined. Vitals, laboratory tests and diagnostic imaging were not performed.

Resuscitation was withheld as this was an orchestrated massacre organized by Lord Walder Frey and she was deemed dead when found. Along with her death, the King of the North and most of his house were gruesomely slaughtered at this wedding; marking the end of the march south towards King’s Landing in an attempt to avenge the death of Eddard Stark, the King of the North’s father.

This case represents the tragic tale of the deliberate massacre of House Stark, Talisa Stark, and her fetus. “The Red Wedding, they’re calling it…” due to the blood spilt in the great hall. Unfortunately, trauma is a common occurrence in pregnancy, affecting 1 in 12 pregnancies, and is the leading nonobstetric cause of maternal deaths.1 In fact, trauma results in the highest mortality rate among any single diagnosis in pregnancy, higher than preeclampsia and hemorrhage.1  Trauma can represent domestic abuse, motor vehicle accidents, penetrating trauma, falls, suicide, and others. In this case, the patient was stabbed multiple times in the abdomen, possibly penetrating the uterus, fetus or other abdominal organs. It may initially appear that the patient had very limited chance of survival due to the massive hemorrhage potential. Her survival would, in part, depend on the location of the stab wounds: the uterus receives increased blood flow in pregnancy, and penetrating a uterine artery would be devastating. However, pregnancy may play a protective role in trauma; National Trauma Data Bank (2001-05) reported decreased trauma-related mortality in pregnant women compared to women who were not pregnant.2 In this report, we will discuss the protective factors of pregnancy in hemorrhage and trauma, and the possibility of successful resuscitation.

During late pregnancy, many physiological changes prepare the mother for birth, and some of these are protective against hemorrhage. By 20-28 weeks gestation, cardiac output increases by 40%.3 Plasma volume also increases progressively throughout pregnancy, protecting mothers from hypovolemic shock. Clotting factors such as VIII, IX, and X increase to induce a hypercoagulable state in preparation for normal bleeding during delivery.3 If penetration of uterus and membranes occurred, the organ itself would partially contract, leading to an injection of up to 300-500ml of blood into the maternal circulation through a process known as auto-transfusion.3 Additionally, any intraperitoneal bleeding would cause contraction of the uterus which could help tamponade bleeding, further decreasing potential hemorrhage. These physiological mechanisms combined would increase circulation, increase organ perfusion and decrease hemorrhage in Talisa, and could have increased her overall chances of survival.

Hormonal effects in hemorrhage and trauma

Circulating estrogen and progesterone are at an increased level during pregnancy. There is evidence to suggest that female sex hormones confer a survival benefit in shock and trauma.2 In a study of 5192 patients, it was found that premenopausal women have less initial serum lactate and require less blood transfusions despite having a higher injury severity score when compared to their male counterparts.4 It is thought that these hormones have an effect on preserving cardiac output and end-organ perfusion. These effects may be mediated by upregulating vasodilators such as cNOS, while inhibiting vasoconstricting agents.4 Thus, the effects of estrogen and progesterone may play a role in further increasing survival in pregnant women suffering from hemorrhagic shock.

Management of cardiac arrest in pregnancy

Management of cardiac arrest in pregnancy is complex, particularly in cases of traumatic cardiac arrest. In particular, the focus of resuscitation is on the mother, as this optimizes both maternal and fetal survival. It is important to secure the airway early since hormonal changes in pregnancy cause insufficiency of the gastroesophageal sphincter, and due to increased pressure on the abdomen leading to a higher risk of aspiration particularly after feasting at the wedding.5 Additionally, functional residual capacity decreases by 10-25% and increased oxygen consumption due to the fetus leads to rapid hypoxemia; endotracheal tube placement and oxygenation should be performed earlier in pregnant patients.5 In terms of circulation, the uterus compresses the inferior vena cava, reducing venous return and cardiac output.5 The patient should be placed on her back and manual displacement of the uterus to the left should be performed to minimize this effect. If available, massive transfusion should be performed in accordance with local protocols. A defibrillator could may also have been used, had it been invented. ATLS management should be initiated with FAST ultrasound, thoracotomy, and laparotomy considered if a Maester experienced with these surgical techniques was available.

Perimortem caesarean section is preformed to potentially salvage the fetus and improve maternal circulation in the event of maternal cardiac arrest.6 There may be a lack of maternal benefit in circulation in performing a caesarean section before 23 weeks gestational age, as the uterus may be too small at this point to affect maternal circulation.6 To complicate matters further, we are unsure of the gestational age as we do not have proper prenatal documentation or ultrasound results. On visual examination, the uterus appears to reach the level of the umbilicus and therefore may be around 20 weeks gestational age. Secondly, if the fetus were older, survival at 23-28 weeks gestational age is highly dependent on the equipment and expertise of the institution. We highly doubt the nursery at The Twins could provide the necessary care. Furthermore, the multiple stab wounds may have injured the fetus, and thus, survival of the baby would have been less likely. We do not believe performing a perimorterm caesarean delivery on Talisa is justified in this case given that the fetus was unlikely to survive due to prematurity and it may not have benefited the mother’s resuscitation efforts.

In a 321 patient cohort, abdominal penetrating trauma led to 7% maternal mortality and 73% fetal mortality.7 Although blood flow and the potential for massive hemorrhage in pregnancy is increased in this patient, a combination of physiological and hormonal changes protect the mother from hemorrhage, and combined with proper management, Talisa may have had a good chance of survival, even though she sustained significant injuries. There are limitations to this report. Proper timing of events and examination was never performed. Moreover, any management or care for Talisa and her fetus would be futile on the property of Lord Frey. Even if she had been resuscitated successfully, she would have been hunted down as she possibly bears the last heir of an enemy to the crown. As someone once said to Robb Stark, “I think you lost this war the day you married her.”

Once again, I found the merger of the world of Game of Thrones and medicine to be fascinating! The Red Wedding was a particularly shocking turn in both the books and the television series with the stabbing of Jeyne (books) / Talisa (television). Reliving its medical aspects were no easier, although I found this to be a helpful review of penetrating trauma in pregnancy. In particular, the focus on supporting the mother (to support the fetus in turn) and the review of the potential indications for a peri-mortem C-section were particularly helpful. Given that in penetrating trauma the immediate cause of shock is generally hemorrhage, the control of bleeding is absolutely essential and in a pregnant patient of sufficient gestational age this is one way to do it (ideally with the support of collaborative obstetrical and neonatal colleagues).

Richard Stein is an Obstetrician/Gynecologist who has worked in Mississauga over the past 10 years. He holds faculty appointments with both the University of Toronto and the Northern Ontario School of Medicine.