A patient with increasing pain and edema in his left leg. In a recent hospital admission he was diagnosed with myeloma. This case reviews pretest probability of deep vein thrombosis, D-dimer and interpretation of compression ultrasound.

Last week when I came onto a day shift I was handed over a patient who was waiting for an ultrasound scan.

He was a 65 year old man who presented at midnight to the emergency department, 6 days after being discharged from hospital. He was diagnosed with multiple myeloma during this 10 day hospital stay. He received radiation therapy to his shoulder because of a painful mass and had not yet started systemic treatment for the myeloma.

The patient came to the emergency department because he had noticed increasing swelling of his left leg, with discomfort in the medial thigh.

His vital signs were all normal. He was fully mobile and kept going outside for a cigarette. He had bilateral pitting edema of the ankles which was worse on the left lower leg than the right. There was no tenderness in the distribution of the deep calf veins although he was tender in the medial mid-thigh. There were no other signs of deep vein thrombosis (DVT).

No diagnostic test is either 100% sensitive or 100% specific. As physicians, we can’t diagnose or exclude a condition without considering the results within the clinical context of our individual patient. This is Bayes theorem, which uses the pretest probability of a condition to calculate the probability of the patient having the disease after a positive or negative test. For example, it is easy to forget that ultrasound can give false positive results when the patient has ‘chronic DVT’ (a fibrous scar remnant of a prior clot), and false negative results (especially if ultrasound does not routinely examine calf veins). Pretest probability estimate should be the first test when a physician assesses a patient for DVT. In general, this can be done by using the Wells score 12 (detailed in Table 1 below) or by gestalt (global) estimation. The pretest probability should always be recorded in the medical record.

Although the patient had some features consistent with DVT, it was not clear to me that he was high risk. To clarify this I calculated his Wells score for DVT. Remembering the components of the Wells score can be challenging during a shift, so always look up the score or use a calculator.

He scored points for cancer and tenderness of the thigh. I also gave him a point for immobility since he had been recently admitted to hospital. When I questioned him, at the time of admission he was too weak to walk around the ward. His total was 3 points which placed him in the ‘DVT likely’ category.

D-dimer is most often used to exclude DVT or pulmonary embolism (PE) in patients with a low risk of venous thrombosis. In this case, I couldn’t use D-dimer to exclude DVT because of the higher pretest probability. This is an example of using Bayes theorem. Generally speaking, a D-dimer can exclude venous thrombosis if the pretest probability is under 15% (or ‘DVT unlikely’)3. His probability of having DVT was too high for a normal D-dimer test to exclude the condition.

However, I did order a D-dimer. My reasoning for this was to help me interpret the results of the compression ultrasound scan.

The ultrasound revealed that this patient had a 12cm x 3cm mass in the mid left thigh. The leg veins compressed normally from the external iliac vein to the calf trifurcation.

Our hospital does not perform ultrasound of the calf veins. In this case, a single negative proximal ultrasound may not exclude a DVT completely. If this patient had had a ‘complete leg’ ultrasound, including all calf veins, I could have been confident that he had no DVT. However, in order to exclude DVT properly, I needed to review his Wells score and his D-dimer (see Table 2 below). Because the patient had a ‘DVT likely’ Wells score AND a D-dimer of 1760 (cutoff 500), I arranged for a repeat ultrasound scan in 7 days time.

You should know which type of ultrasound is offered in your hospital. Many hospitals offer proximal ultrasound only, in which case you will need the D-dimer and the Wells score pretest probability. This especially important if the ultrasound result will be reviewed by another physician. Be sure to give them the Wells score and the D-dimer.

I discussed the patient with his hematologist, who agreed to review him the next day in clinic. The patient would start chemotherapy in two days time. He was discharged home from the emergency department with an appointment for a repeat ultrasound in a week and no additional treatment. 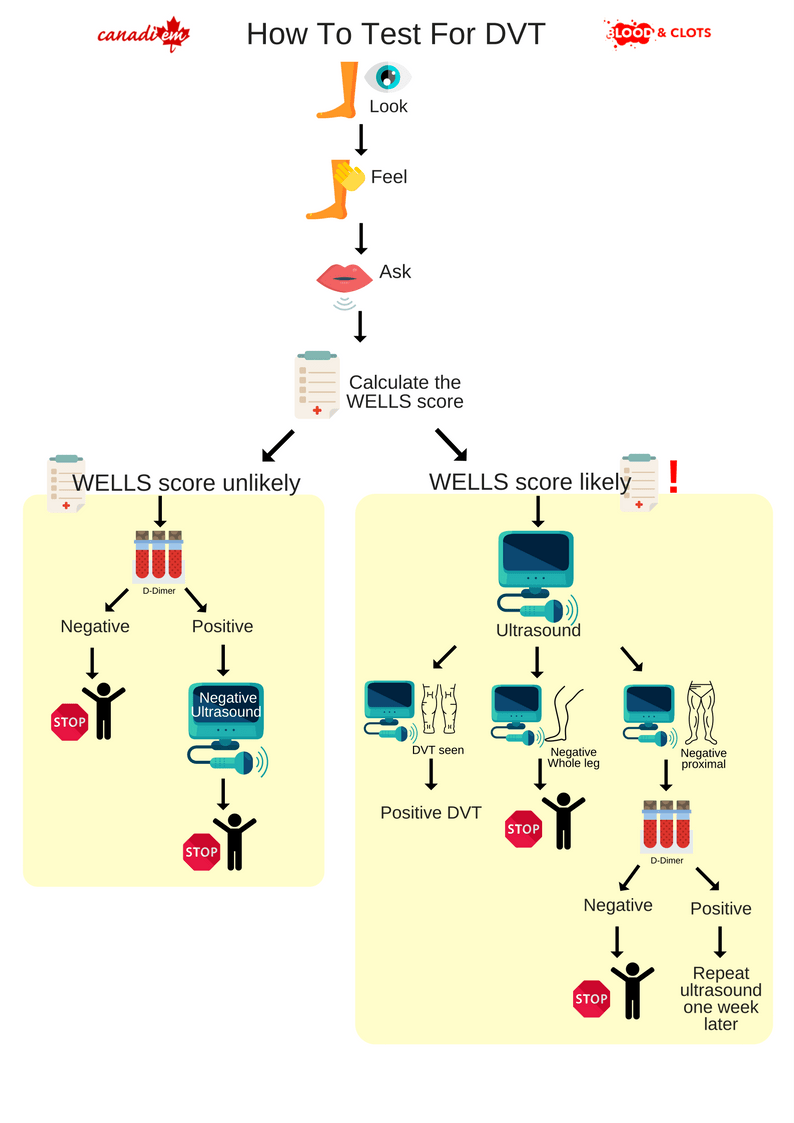 You are reviewing a patient who has pain in the calf. He flew from home from Australia (a 23 hour journey) three days ago. He has no chest symptoms. He is overweight (BMI 32) but otherwise healthy. He tells you that his father was treated for ‘blood clots’. His leg examination is normal.

Question 1: What is your first action?

A) Order an ultrasound scan

E) Send him to a specialist clinic such as Thrombosis

Correct answer is D. You must calculate his pretest probability of DVT in order to work out if you can use D-dimer to exclude DVT. If so, the patient may not require an ultrasound scan.

Question 2: What is his Wells score for DVT?

A) 1 point because he has been immobile during the journey

C) 1 point because he has a family history of DVT

This post was reviewed by Kira Gossack-Keenan, Teresa Chan and copyedited by Rebecca Dang.