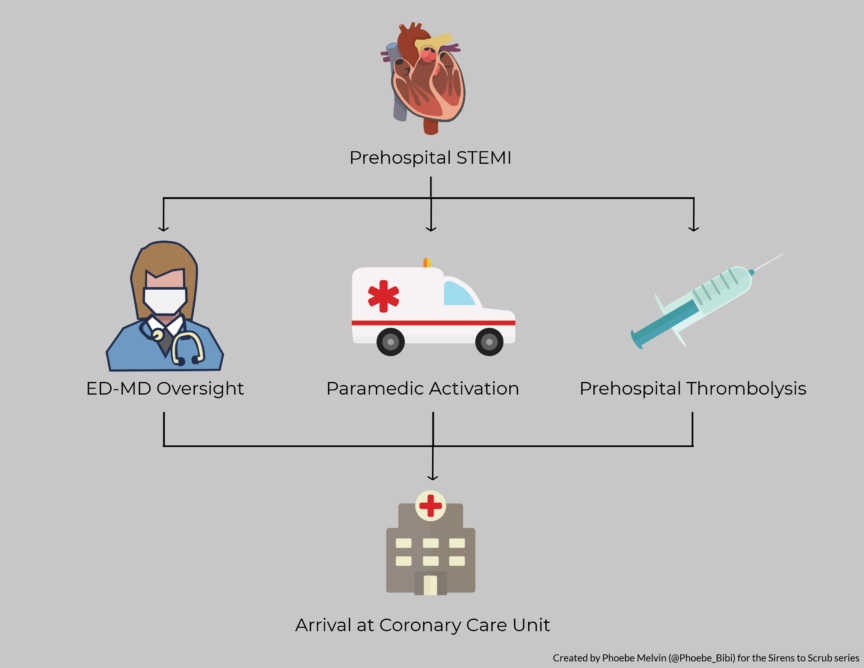 In Part One of this series our dashing paramedics have reviewed the pathophysiology of Acute Coronary Syndromes (ACS), historical findings and risk factors associated with ACS and have subsequently identified that their patient is suffering from a large ST-Segment Myocardial Infarction (STEMI). What happens in the prehospital environment for patients with ACS? Read on to find out…

Aspirin is a cornerstone of the therapy provided by paramedics in ACS, remaining a Class 1 recommended intervention in both the American Heart Association (AHA) and European Society of Cardiology (ESC) guidelines.1–3 Aspirin exerts its effects in ACS by preventing the further accumulation of platelets around the coronary plaque described in Part One of this series. For every 42 patients suffering from ACS, Aspirin has the potential to save one life. Quite incredible for an unassuming pill! The optimal dosing of Aspirin in ACS remains somewhat contested, with some studies potentially suggesting an association with a higher dose (324mg) of Aspirin and significant in-hospital bleeding when compared with a lower dose (162mg), despite an apparent equal clinical effect.4 The dose employed by ambulance services in Canada and internationally is variable, with doses ranging from 150mg to 325mg as recommended by the AHA and ESC.

Sublingual nitroglycerin, or glyceryl trinitrate, is the primary vasodilating agent used in prehospital care for patients with ACS. Nitroglycerin administration results in decreased myocardial oxygen consumption through several mechanisms. As a smooth muscle relaxant, it causes:

Sublingual nitroglycerin is generally dosed at 0.4mg every 5 minutes whilst ischemic symptoms persist, with cautions as the cumulative dose increases in case of excessive vasodilation and a secondary paradoxical tachycardia.

Myocardial ischemia is undoubtedly a painful, or at the very least uncomfortable, experience. A fundamental aspect of prehospital care is the alleviation of suffering in the form of analgesia, which is particularly relevant in the setting of ACS. Historically, this has been achieved through the use of intravenous (IV) morphine titrated incrementally to effect. Although this remains current practice in many ambulance services worldwide, some have seen a shift to fentanyl as the analgesic of choice in ACS.

Although the administration of high flow oxygen to patients has long been associated with prehospital care, most ambulance services have now moved away from routine administration of oxygen to patients with ACS without evidence of clinical hypoxaemia (Sp02 < 94%). The shift in prehospital care away from routine oxygen therapy was largely driven by the results of the AVOID and DETO2X trials, which found that the routine administration of oxygen to patients with myocardial infarction appeared to increased infarction size and early myocardial injury, without improving 1-year mortality.5,6 The ESC also updated their guidance to recommend against oxygen therapy (Class III recommendation), although the AHA guidelines still possess a degree of ambiguity in suggesting oxygen may be beneficial in some groups of patients.1–3 In ambulance services still applying oxygen routinely in myocardial infarction, it is entirely possible this may be a practice change on the horizon for your service. However, it is essential that any change made in individual practice is supported by local guidelines and protocols, and so paramedics should continue to practice as advised by their medical directorate.

A Deeper Dive into Physiology, Evidence and Potential Upcoming Changes

Aspirin entered into the spotlight in the care of patients with ACS following the landmark ISIS-2 trial in 1988.7 The mechanism of action of Aspirin in ACS is predominantly related to its irreversible inhibition of cyclooxygenase (COX) enzymes, specifically COX-1 enzymes. In platelets, the COX-1 enzyme is responsible for producing Thromboxane A2, a substance that binds to receptors on activated platelets and causes activation of additional platelet and aggregation, forming platelet plugs. Thus, Aspirin prevents further clot formation, preventing the growth of the troublesome thrombus.

Nitroglycerin mimics the actions of endogenous nitric oxide, increasing the levels of intracellular cGMP. Raised levels of intracellular cGMP inhibit the entry of calcium into cells, which is the causative mechanism in the induction of vascular smooth muscle relaxation. Although generally described as a ‘symptom-relief medication’, a 2009 Cochrane Review found that in patients suffering from ACS administration of intravenous nitroglycerin provided a reduction in mortality at 2 days, if administered within 24 hours of symptom onset.8 Unfortunately, given that the review included only intravenous nitrates it cannot be extrapolated to sublingual nitrates (we are unaware of any ambulance services currently using IV nitrates).

Owing to an observed superior safety profile, many ambulance services, emergency departments, and cardiology wards have shifted to fentanyl as the analgesic of choice in ACS. This change has occurred in conjunction with recent studies that have demonstrated delayed uptake of P2Y12 receptor inhibitors – clopidogrel (Plavix) ticagrelor (Brillinta) and prasugrel (Effient) – when IV morphine is administered.9,10 Platelets have several receptor types; in addition to the TXA2 receptor discussed above, P2Y12 receptors, when bound, lead to platelet aggregation. Thus, these agents are given in addition to ASA to inhibit platelet aggregation in ACS. Data extrapolated from the pharmacology of transdermal fentanyl appears to suggest that fentanyl would have a lesser impact on gastric motility, although the confirmation of this theory will likely not be known until the publication of the upcoming PERSEUS randomized controlled trial, designed to look at this exact issue.11

The ability of paramedics to acquire and interpret 12-Lead electrocardiograms (ECGs) undoubtedly represents one of the most important developments in the prehospital profession. In general, the acquisition of a 12-Lead ECG is a skill performed by paramedics in Canada at the level of Primary Care Paramedic (PCP) and higher, although in some regions Advanced Care Paramedics (ACP) and higher are required to initiate STEMI Bypass procedures (where available). Recognition of STEMI by paramedics in the prehospital field has continually been demonstrated to reduce the time taken for the patient to arrive at definitive care. In general, there are two primary systems in place for STEMI notifications where Percutaneous Coronary Intervention (PCI) is the definitive therapy of choice. The first involves the transmission of the ECG to the emergency department (ED) of the receiving hospital, with the ultimate decision as to whether to activate (or not activate) the coronary catheterization lab (commonly known as the ‘cath lab’) resting in the hands of the emergency physician. The second involves the paramedic activating the cath lab without emergency physician oversight, either with a transmission to the receiving cardiologists or autonomously without transmission. Both systems have strong merits, with emergency physician oversight potentially assisting in avoiding false-positive activations of the cath lab, although paramedic-led bypass has been shown to potentially further reduce the time from first medical contact to balloon.

What about the Non-ST-Segment Elevation Myocardial Infarctions we discussed last week?

Paramedic identification of a Non-ST-Segment Elevation Acute Coronary Syndrome (NSTE-ACS) generally leads to a discussion with local emergency physicians and cardiologists at specialty resource centres in order to coordinate the optimal care for the patient. Although many NSTE-ACS patients will be managed with aggressive medical therapy, there is a select subgroup who may benefit from early PCI. In some services, such as the London Ambulance Service NHS Trust, this has led to the development of ‘High-Risk ACS Pathways’. Patients in these pathways will present with historical findings concerning for NSTE-ACS and ECG findings consistent with myocardial ischemia, such as non-localised ST-depression or localized flipped T waves, and will be transported to specialty resource centres capable of 24 hour PCI, without pre-activating the entire cath lab team.

Although PCI is considered the optimal therapy for patients suffering from STEMI, it is (unfortunately) both impractical and fiscally not possible to have PCI centres in every community. In general, guidelines will advocate for a PCI approach to STEMI care in cases where the time from point of initial medical contact to the commencement of PCI is less than 120 minutes (in some areas, less than 90 minutes). In communities where this is not possible, patients will be managed with thrombolysis and either emergency transfer for rescue PCI (in cases where fibrinolysis does not resolve the STEMI) or routine angiogram within 1-2 days. However, what if you are a paramedic working in a region where the nearest hospital is over two hours away?! Pioneered in Australia and the United Kingdom, prehospital, paramedic-initiated thrombolysis has been shown to be safe and effective in the management of STEMI patients not eligible for PCI as first-line therapy.12–15

The initiation of prehospital thrombolysis will involve the use of advanced cardiac medications such as Clopidogrel (Plavix), ticagrelor (Brillinta), Heparin, Enoxaparin, and tenecteplase. Although the following discussion of the mechanism of action of these medications may appear intimidating, compare them against the previous post and your own understanding of ACS to better understand how they all fit in the management of ACS!

Both clopidogrel and ticagrelor function by binding to P2Y12 receptors and blocking them, inhibiting the activation of the GPIIb/IIIa complex found in platelets. As a reminder, activated GPIIb/IIIa promotes platelet aggregation (see, we told you that GPIIb/IIIa was important and would make sense!)

Finally, tenecteplase binds to the fibrin-rich thrombus we were left with at the end of Part One. As it binds with the fibrin-rich thrombus, tenecteplase causes the release of plasmin. Plasmin in turn degrades the fibrin mesh surrounding the clot, releasing the trapped contents, reducing the size of the thrombus and allowing sweet, sweet oxygen-rich blood to return to the myocardium. Yay!

If any Canadian services are employing prehospital thrombolysis, we would love to hear from you! British Columbia Emergency Health Services will shortly be commencing a trial of prehospital ticagrelor and heparin in regions where the time to PCI exceeds 120 minutes and it would be excellent to hear of other services experiences with similar interventions (collaboration is king)!

Exhausted? We certainly are! Managing a STEMI in the prehospital environment is complicated!

A special thanks to @Phoebe_Bibi for her graphic representation of coronary systems of care!

Richard Armour is an Advanced Care Paramedic with the British Columbia Ambulance Service and Associate Faculty with the Justice Institute of British Columbia. Having completed a Bachelor of Paramedic Practice in Australia, he moved to the United Kingdom where he worked as a Paramedic for the London Ambulance Service NHS Trust prior to moving to Canada. Now pursuing an MSc in Advanced Emergency Care and a Masters of Paramedicine, Richard has a keen interest in prehospital patient safety, clinical audit and research.