It’s one of those mythical interventions that everyone has heard of, less have attempted and few have seen used successfully. Everyone knows someone who knows someone that brought a patient back from the brink using only hope and the power contained within a tightly clenched fist. There’s something almost mystical about restarting a patient’s heart with a bare hand. However, these events are so rare that until Nadim Lalani’s tweet flew across my feed I actually thought the precordial thump had already gone the way of the triceratops. 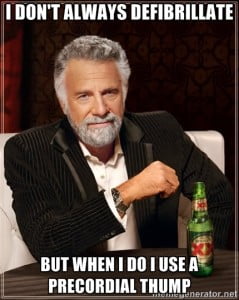 Originally documented in 1920 by Schott in the paper “Ventrikelstillstand (Adam-Stokes’sche Anfälle) nebst Bemerkungen über andersartige Arrhythmien passagerer Natur,” the precordial thump is a legendary procedure that involves thwacking the sternum of an arresting patient with sufficient force to cause coordinated cardiac depolarization. Even better, it has the potential to be a fast, low-tech, ninja-like way to achieve ROSC. It is how Chuck Norris would defibrillate. Clinicians who have managed to pull it off are spoken of with a level of awe appropriate for their awesomeness. Those that mess it up… just look like they’re hitting the poor patient that arrested.

This post will review thumping technique and examine the latest evidence to help you decide to thump… or not to thump.

The precordial thump technique used in the literature is fairly consistent. Descriptions include:

Consensus definition: A precordial thump is an impact delivered with the ulnar aspect of a clenched fist from ~20cm above the patient’s chest to the bottom third of the sternum and followed by immediately retraction.

YouTube has a demonstration of a precordial thump on a manikin (see 1:02). If anyone has a better video please send it to me!

Evidence on the benefits and harms of the precordial thump is not consistent. The 2010 ACLS Guidelines concluded:

Before I review the fancy new September 2013 study that finally got me to learn about the thump I will review the literature that led to the ACLS recommendation above.

The available studies investigated the effect of a precordial thump on patients’ immediate condition and have been done in three settings (electrophysiology suites, hospital wards and prehospital settings). Technically, we cannot calculate a real NNT for these studies because they do not have a control group. However, if we assume that the positive/negative effect of not doing a precordial thump is close to 0 we can use that value to calculate an Absolute Risk Reduction and the NNT. While that assumption may be flawed, I think even an estimated NNT does a better job of putting the benefits and harms in perspective than a bunch of other numbers.

Want to study a lot of patients with ventricular arrhythmia’s in a short period of time? The electrophysiology suite is the place to be! With many of their procedures requiring ventricular stimulation they have a lot of patients that flip into ventricular arrhythmia’s. They also have continuous monitoring to detect their onset and a cardiologist standing by with the ability to perform a precordial thump almost instantaneously. There have been two studies done in this environment.

Amir (2007) and Haman (2009) conducted similar nonrandomized prospective studies that assessed the performance of precordial thump on ventricular arrhythmia’s induced in this setting and had similar results. Amir had 1/80 patients convert while Haman had 2/155 (estimated NNT’s of 77.5-80). All 3 of the patients that converted were in monomorphic VT.

With such a small number of patients converting it does not seem to be an effective treatment in these patients, especially considering they are already prepared for immediate electrical cardioversion. However, these patients represent a different population than those seen in the prehospital and ED settings.

These studies do provide evidence for the safety of the thump itself as neither documented traumatic injury or transition to arrhythmia’s with poorer prognosis.

The hospital has a lot of sick, monitored patients and coordinated code teams. Surely it would also be a fertile environment for a study? Unfortunately, not a lot of work has been done in this setting. The one prospective study done in the hospital environment does not appear to be available in English.

According to Miller (1984), Volkmann (1990) analyzed a group of 47 hospital patients and reported a thumping success rate of 77% for termination of VT at rates of <160 with no adverse events – I wish I knew the Volkmann technique! Efficacy was reduced above at higher rates and it was completely ineffective during VF.

This single study and various case series seem to have provided the majority of the evidence for the use of the thump. However, it seems to be an outlier as its results have not been replicated.

Miller (1984) conducted a nonrandomized prospective pre-hospital study on 50 patients that went into VF or pulseless VT at some point during their resuscitation. Unfortunately, the methodology was not quite up to today’s standards and insufficient data was provided to determine how long after arrest the patients received the precordial thump. Additionally, while thumps were delivered only for VF/VT, they were not the initial rhythms in 20 of the 50 patients.

Regardless, the study did not support the practice. Only 2/27 patients were thumped from VT to a supraventricular rhythm with a pulse (estimated NNT of 13.5) and 12/27 transitioned to a less favorable rhythm (8 VF, 3 asystole and 1 PEA – NNH of 2.25). None of the VF patients had a rhythm change after the thump. This suggests precordial thumps are much more likely to convert the patient to a rhythm with a worse prognosis than reboot the heart.

Pellis (2009) conducted a nonrandomized prospective study on 144 patients with out-of-hospital arrest and a more modern methodology. Sort of. There was no randomization and inclusion in the study cohort was dependent upon whether or not the EMS providers elected to try a thump prior to proceeding with standard ACLS (219 patients were excluded as a result). A thump was delivered to qualified patients after the attachment of defibrillation pads to allow for identification of the rhythm.

Interestingly, while the precordial thump led to ROSC in only 3/144 patients (estimated NNT of 48), the 3 patients it worked on had a witnessed asystolic arrest. In total, 3/11 witnessed, asystolic arrests achieved ROSC and 2/3 were discharged from hospital. Those work out to estimated NNT’s of 48 and . Both of the patients discharged were thumped within 60 seconds of arrest. There were no injuries reported in the patients following precordial thump, but three had other rhythm changes (PEA -> Asystole; Asystole -> PEA; VT -> PEA).

Finally, to the study that inspired this post! Following Nadim Lalani‘s tweet about this recently published study the twitterverse lit up.

@TChanMD I agree, I was more concerned with the number-needed-to-look-awesome 🙂
— Rory Spiegel (@CaptainBasilEM) October 5, 2013

Nehme (2013) was a nonrandomized retrospective study of data from the Victorian Ambulance Cardiac Arrest Registry in Australia. They included 434 patients with VF (305) or pulseless VT (37) of presumed cardiac etiology. 103 were initially treated with precordial thump and the other 325 with defibrillation.

As awesome as it would be if this worked, based on the evidence that I have reviewed I’m not sure why this procedure is still in the guidelines. The newest study is the only one that was not available for the 2010 iteration of ACLS and it thumps another nail into this procedure’s coffin. Bottom line: the current literature suggests the NNTLA (number needed to look awesome – Rory Spiegel) and help the patient is 13-50 while the NNTLLAI (number needed to look like an idiot – Todd Raine) and hurt the patient is 2-10.

Rhythm degradation is the natural course of a cardiac arrest so it is possible that the harms were not a result of the thump’s. However, the excellent outcomes with electricity makes it clear that early defibrillation should be the #1 intervention. The weight of the evidence suggests that it causes more harm than good so classic teaching that a thump “can’t hurt and may help” should be corrected and legendary doc’s may have to find another way to look awesome.

I definitely moved away from the “boring” with this post, but once I got into it I just couldn’t stop. I’ll get right back to mind numbing with my next post, I promise. Thanks for reading and sharing.

Thanks as well to my reviewers, Drs. Teresa Chan and Rory Spiegal.