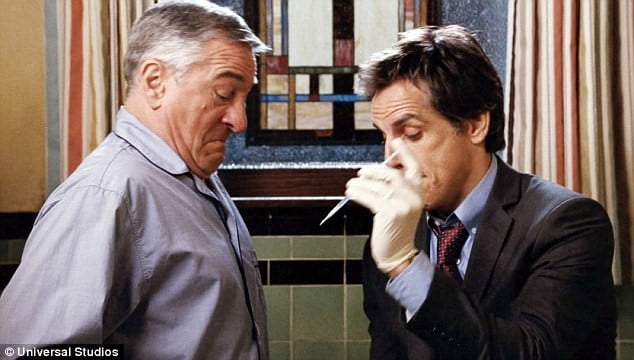 Jack Byrnes, a 62-year-old Caucasian male, presented to the ER with a persistent, painful, 8-hour erection following the off-label use of Sustengo, a novel PDE5 inhibitor. Jack reports that he found a box of Sustengo samples among his son-in-law’s belongings and decided to try one. When his son-in-law discovered what had happened, he urged Jack to go to the ER. Jack refused and insisted that his son-in-law, a nurse, manage the priapism instead. After trying ice, a cold shower, and even mental math, Jack allowed his son-in-law to administer an injection of epinephrine into the corpora cavernosum. When this attempt failed and his pain continued to worsen, he reluctantly presented to the ER in his baggiest winter jacket. Jack denied recent trauma, recreational drug or alcohol use, or any previous episodes of priapism. He has no personal or family history of sickle cell disease. He has never had problems with erectile dysfunction. He had a NSTEMI 2 years ago and takes ramipril, ASA, atorvastatin, and metoprolol.

On examination Jack appears well other than being diaphoretic due to his attire. His vitals were stable. Examination reveals a fully erect and tender penis with rigid corpora cavernosa and no discolouration.

Therefore, Jack’s presentation of priapism after taking a PDE5 inhibitor, with no other risk factors for priapism, is unusual. Bloodwork (CBC and differential, peripheral blood smear, and INR/PTT) to screen for hematological abnormalities, signs of malignancy, or contraindications to surgical therapy would be reasonable.​4​ Additionally, screening the patient for other medication use is often prudent, as a long list of other drugs (all conveniently starting with the letter ‘A’) is associated with ischemic priapism​5​:

If patients present with a short prolonged erection rather than acute ischemic priapism (<4-6 hours, non-painful), an injection of a sympathomimetic (ie 400 mcg phenylephrine) with an ultrafine needle and 1-mL syringe can be attempted as first-line management.​10​ Alternatively, the patient can be observed for spontaneous resolution. Oral therapies are not indicated for any patient with priapism.​11​

True ischemic priapism requires emergent intracavernosal intervention to preserve erectile function regardless of etiology. The first step in management is a penile nerve block. A dorsal nerve block is generally chosen and is achieved by infiltrating the dorsal nerves at the base of the penis with 1% lidocaine without epinephrine.​4,10​ A ring block is equally effective for priapism and provides anaesthesia to the entire distal penis, but care should be taken to avoid the dorsal arteries and veins.​4​

Once the penis is anaesthetized, a 19-gauge butterfly needle is inserted into the corpus cavernosum at the 3 or 9 o’clock position at the penoscrotal junction.​10–12​ Initially 3-5 mL should be aspirated from the corpus cavernosum to confirm the diagnosis through blood gas analysis, to relieve pain and pressure, and to allow for the flow of fresh blood into the corpora cavernosa.

If the patient does have ischemic priapism, aspiration should continue until bright red blood is seen, signalling the return of fresh blood into the corpora cavernosa.​1,4,11​ The approximate volume of the corpora cavernosa is 100mL, so aspiration of >100mL is generally unnecessary.​13,14​ Historically, aspiration was accompanied by irrigation with saline. However, this practice has been abandoned as there is no evidence that irrigation improves efficacy.​15​

While corporal aspiration only resolves ischemic priapism in around 24-36% of patients, injection with a sympathomimetic agent increases resolution rates to 43-81%.​11​ Sympathomimetics are contraindicated in patients on monoamine oxidase inhibitors or with uncontrolled hypertension.​12​ A variety of sympathomimetic agents can trigger detumescence but, despite an absence of trials directly comparing agents, phenylephrine is recommended by the American Urologic Association and European Association of Urology for its superior cardiac risk profile as a selective alpha-1 agonist.​1,11​ Phenylephrine should be diluted to 100-500 mcg/mL and administered directly into the corpus cavernosum as 1 mL injections every 3 to 5 minutes.​1,11​ Since contraction of the cavernous smooth muscles is impaired by acidotic, hypoxic, and glucopenic environments, Wien et al. suggest compressing the base of the penis and aspirating the corpora cavernosum until the distal shaft collapses prior to each injection.​10,16​ The patient’s blood pressure and heart rate should be monitored.

Phenylephrine injections should continue for an hour before deemed unsuccessful, with a proposed maximum cumulative dose of 1000 mcg.​10​ Sidhu et al. suggests that phenylephrine doses up to 3000 mcg may be safe, showing no clinically significant changes in heart rate or blood pressure and no adverse reactions in 74 ischemic priapism cases.​17​ However, reports of subarachnoid hemorrhages and myocardial infarctions following the administration of phenylephrine in ischemic priapism patients highlight the importance of close blood pressure and heart rate monitoring.​10,17​ Additionally, lower doses of sympathomimetics should be used for patients with cardiovascular disease.​10,17​

Jack’s presentation is consistent with acute ischemic priapism and thus immediate intracavernosal management is indicated. It is unsurprising that the one-time injection of epinephrine given to Jack by his son-in-law was unsuccessful, as aspiration was not performed, and repeat injections were not administered. Jack should receive a penile nerve block for proper procedural analgesia followed by aspiration of stagnant blood from the corpora cavernosa. If this does not resolve the priapism, it would be prudent to put Jack on telemetry prior to administering phenylephrine, due to his cardiac history. Additionally, Jack should receive small doses of phenylephrine. Since Jack reports good erectile function prior to his priapism and presented within 8 hours, surgical shunting would be indicated only after aspiration / injection failure. Finally, it is important to reassure Jack that “urine good hands” and that he will be helped through the ups and downs of this hard situation.

Anna has done a wonderful job presenting a classic case of drug induced priapism and its subsequent treatment. It is key to differentiate non-ischemic (high flow) from ischemic (low flow) priapism, but the etiology is usually quite different, with non-ischemic priapism almost always occurring after trauma. This case report focuses on the more common, ischemic priapism. Complications from this condition can result in devastating results for the patient, and they should be informed of possible long-term sequelae at the time of the initial encounter.

Upon first presentation, I think it is not premature for the emergency doctor to have a whack at initial management, as time is of the essence. They can often be coached through the process remotely, if necessary. Most patients will be successfully treated in the local emergency department, but ultimate surgical intervention is occasionally required, which would mandate Urologic involvement.

Dealing with this problem can be hard, as patients often harbor an engorged embarrassment, and are afraid to seek treatment. Many wait quite long before coming into the ED. However, the medical team must stand tall and treat the patient with dignity and respect.

Make no bones about it, the management of priapism is hard business! With firm resolve, together we can achieve a nice, soft outcome for these patients.

Dr. Saul Goodman
Dr. Saul Goodman has worked as a Urologist at the Chilliwack General Hospital since 1997. He is an Assistant Clinical Professor at the University of British Columbia, where he completed his residency, and graduated from Dalhousie Medical School in 1992.
(Visited 2,386 times, 1 visits today)

Anna Black is a medical student at the University of British Columbia, whose interests range from rock climbing to kidney stone finding.