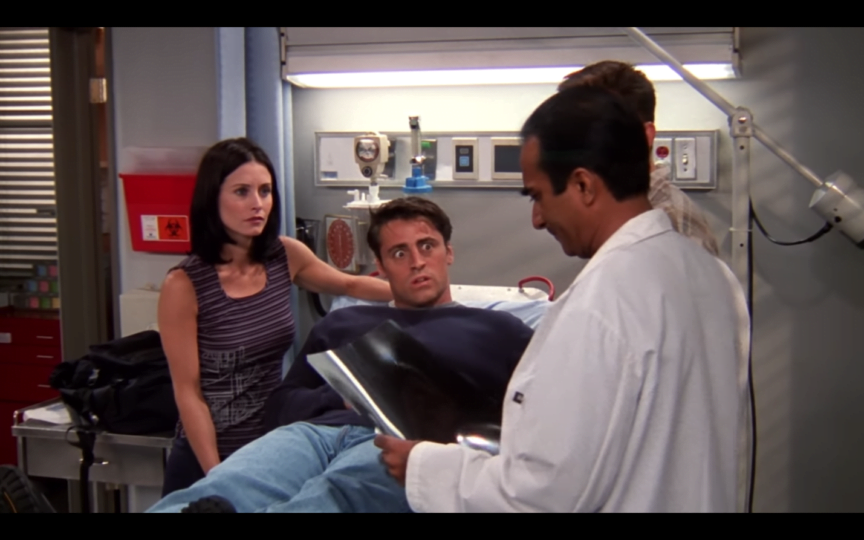 Joey Tribbiani, a previously healthy 28-year-old male, presents to the ED with left-sided flank pain. In the past 12 hours, he has had four 20-minute episodes of sudden onset, severe left flank pain radiating to the groin. During these episodes he was unable to find a comfortable position. He felt nauseous and had one episode of emesis. He denies hematuria and any lower urinary tract, gastrointestinal, or respiratory symptoms. He reports no fever or chills. There was no previous history of kidney stones. Initially, he attributed these episodes to being “sympathy pains”, as his friend is in labour, but he is now concerned it could be something more serious.

His vitals were stable. He was unable to find a comfortable position due to the pain. His abdomen was soft and non-tender, but he had left CVA tenderness. Testicular and digital rectal exams were not performed.

Joey was immediately sent for a KUB (kidney, ureters, bladder) X-ray which revealed a kidney stone in his left ureter. He was told he could undergo ureteroscopy or wait for spontaneous passage of the stone, given that it was “too close to the bladder now” for shock wave therapy. Joey chose to wait and was given “drugs”. He was able to pass the stone a couple hours later despite immense distress secondary to pain.

Although Joey initially believed he had Couvade syndrome, or sympathetic pregnancy, his presentation would have been atypical. Generally, Couvade presents with symptoms mirroring a pregnant partner’s symptoms in the third trimester such as indigestion, weight gain, and changes in appetite​1​. Therefore, Joey had a rare moment of wisdom when he disregarded Pheobe’s diagnosis of “sympathy pains” and presented to the ER with renal colic.  In patients presenting to the ER with suspected urolithiasis, a number of emergent diagnoses have to be ruled out including: AAA, appendicitis, diverticulitis, acute mesenteric ischemia, intestinal obstruction, testicular/ovarian torsion, and ectopic pregnancy. Joey’s age, the localization of pain, the absence of GI symptoms, and his unremarkable examination significantly lower the probability of these causes. However, a testicular exam should have been done to rule out torsion. He should have received blood work and a urinalysis. The presence of fever, pyuria, rigors, or unstable vitals could indicate a septic stone that would need to be dealt with emergently. Stones threatening renal function and intractable pain or emesis should also trigger an urgent urology consultation.

The investigation and management for Joey raises two other important questions:

Question 1: Was the x-ray KUB appropriate?

Currently, imaging is used for two purposes: to determine stone size/ location of a stone as this informs treatment decisions,  or to confirm the diagnosis / rule out alternatives. However, the vast majority of stones pass spontaneously​2,3​. Additionally, patients that score in the high category on the STONE score, a diagnostic tool for urolithiasis, only have a 1.2-1.6% likelihood of an important alternative diagnosis​4,5​. In fact, bedside ultrasonography (US) likely has no diagnostic benefit in patients with high STONE scores​6​. While certain patients have indications for non-contrast CT (NCCT), many patients can receive US as a first-line diagnostic tool or may require no imaging at all​7–9​.

Which Modality Should be Used?

NCCT is widely acknowledged as the gold standard in the USA due to its high sensitivity and specificity​8​. Since the performance of low-dose NCCT is nearly equivalent to standard-dose NCCT in patients with a BMI ≤30 or stone ≥3mm, low-dose NCCT is recommended to reduce radiation exposure in patients with suspected urolithiasis​10–12​. X-ray KUB also exposes patients to ionizing radiation, but has poor sensitivity and specificity and is generally only used as a follow-up tool in patients who are known to have radiopaque stones​2​.

The rate of NCCT for flank pain increased 10-fold (4% to 42%) in American EDs from 1996 and 2007​13​. However, this was not associated with a change in the proportion of patients diagnosed with urolithiasis​13​. Additionally, a randomized controlled trail (RCT) of patients receiving ultrasonography (US) or NCCT as first-line imaging failed to show a difference in the number of missed diagnoses and outcomes between the groups, despite the higher sensitivity and specificity of NCCT​14​. Although many patients received a NCCT after US, the US group still had lower radiation exposure and costs, suggesting that US should be used for first-line imaging​14​. The European Association of Urology agrees, recommending that “US should be used as the primary diagnostic imaging tool”, followed by low-dose NCCT “to confirm stone diagnosis in patients with acute flank pain”​2​. However, it is important to note that differences in resource availability across sites factor into imaging decisions.

Figure 1: Approach to imaging for renal colic in the emergency department​9​.

Joey is a Caucasian male presenting with <6 hours of renal colic, accompanied by nausea and vomiting. This puts his STONE score in the high-risk category regardless of the presence of hematuria. He has no red flag features, appears well, is otherwise healthy. Luckily, his symptoms resolve with medication, and thus he could be discharged without imaging. Although x-ray KUB may have been the best choice in 1988, if Joey were to receive imaging in 2020 US would be more appropriate.

A patient with a diagnosis of uncomplicated urolithiasis should receive analgesia and anti-emetics as needed, and medical expulsive therapy can be considered.

Which analgesics should be used?

Trials comparing NSAIDs and opioids have repeatedly shown that patients who receive NSAIDs as first line analgesics have fewer requirements for rescue analgesia, a lower rate of emesis, and fewer adverse events​15–18​. Although there is some debate whether NSAIDs are truly more effective than opioids, they are generally recommended as first line analgesia for renal colic​15–17​. Additional studies have demonstrated that administering both NSAIDs and opioids results in greater and more rapid pain relief, suggesting that combination therapy may be appropriate for patients presenting with severe renal colic​19,20​. However, further studies are needed to investigate combination therapies.

What is the role of medical expulsive therapy?

Medical expulsive therapy with alpha-blockers was thought to improve stone passage and decrease pain, and was recommended for stones <10mm by the 2015 Canadian Urologic association guidelines​3,21,22​.

However, two large multicenter RCTs called this into question in 2015 when both failed to show a benefit of tamsulosin in stones measuring <10 mm​23,24​. Of note, the data did trend towards increased stone passage for 5 to 10mm distal ureteric stones with tamsulosin​23,24​.  A third RCT looking specifically at distal ureteric stones re-enforced these findings by showing superior expulsion rates and times in patients receiving tamsulosin with 5 to 10mm stones​25​. Additionally, these patients required less analgesia​23–25​.

Therefore, it appears daily tamsulosin is beneficial in patients with 5 to 10mm stones, but not in patients whose stones measure < 5mm​25​.

Joey Tribbiani presented with left renal colic and no contraindications to NSAIDs. He was given very effective “drugs” that rapidly settled his symptoms. Given current evidence, we hypothesize that he received ketorolac and ondansetron​23–25​. Since Joey’s stone passed almost immediately, it may have measured < 5mm and thus he did not need to receive tamsulosin.

Anna has done a wonderful review of a typical case of renal colic seen in the emergency department. She has summarized the key clinical concerns regarding diagnosis and treatment in the acute setting.

My interactions regarding stone patients in the ER usually focus on two main decisions. How best to confirm the diagnosis, and who, amongst many patients with this presentation, requires urgent intervention? The literature remains mixed on best first imaging of renal colic patients. I have been fooled in the past by a “normal” renal ultrasound, and thus I am a firm believer in obtaining a non-contrast CT abdo/pelvis for any patient where the diagnosis or need for intervention is unclear. It truly is the imaging modality of choice.

Deciding which treatment method to use to deal with a ureteric stone depends upon many factors, but is ultimately up to the urologist. I think in the ER the focus must be on the primary issue, which is who needs urgent intervention, either with surgery or interventional radiology. Most patients do not require urgent intervention, even for ongoing pain, and can usually be treated as outpatients. However, a small subgroup does, and must not be missed. This includes septic patients, patients with acute renal insufficiency, patients with a solitary kidney, and finally rare patients with bilateral ureteric stones.

In summary, use the best tool to make the correct diagnosis, and never send home a patient who requires urgent care.

Dr. Saul Goodman
Dr. Saul Goodman has worked as a Urologist at the Chilliwack General Hospital since 1997. He is an Assistant Clinical Professor at the University of British Columbia, where he completed his residency, and graduated from Dalhousie Medical School in 1992.
(Visited 2,278 times, 1 visits today)

Anna Black is a medical student at the University of British Columbia, whose interests range from rock climbing to kidney stone finding.