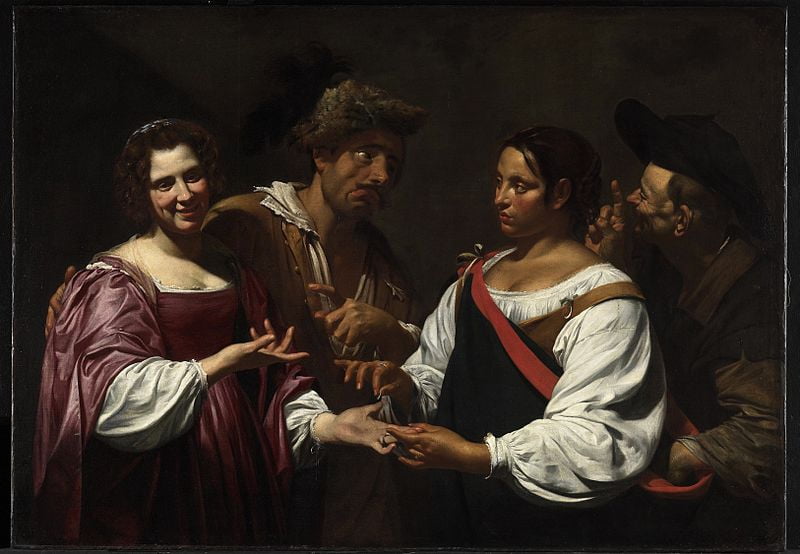 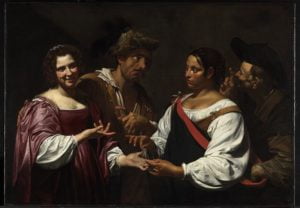 “Hidden stories” is a series that is part of Arts PRN that focuses on challenging and building observational skills. How many details can you notice? Can you weave together a story from this one still image? Don’t forget to check out more series featured on Arts PRN here.

Test your visual intelligence by trying to decipher the story depicted in this painting from 1620 titled “The Fortune Teller” by Simon Vouet!

While you’re giving it some thought, please consider taking 5 minutes to give us feedback on the “Spot the Diagnosis!” series. From newcomers to loyal fans, we would love to hear about how you use the series and what we can do to improve! It takes less than 10 minutes (really, only 5).

Click here to provide feedback on the “Spot the Diagnosis!” Series!

Where are the people in this painting?

We are not sure where the scene is set. The background is blacked out with no detail as to the location. There is a harsh light on the subjects that seem to be coming from the left.

What appears to be the role of each individual? 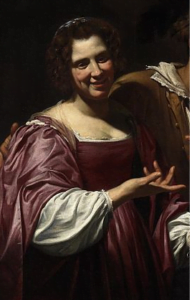 The middle-aged woman shows many details that point to a prosperous background. She has beautiful, clean clothing that appear to made of a silk or satin material. Her skin is pale with evidence of rouge on the cheeks. She appears to be gesturing and happily making eye contact towards the viewer – drawing us in. Could she be putting on a show for an audience? Impressing her friends? 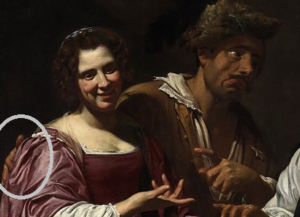 The man to the right of the woman is not dressed as lavishly as her. He is wearing a silly looking feather hat and is overall well-dressed but in worn clothing. He has his right hand placed on the shoulder of the woman in pink. He is pointing towards her, but making eye contact with the fellow to the far right. His expression looks to be morose or possibly indifferent. 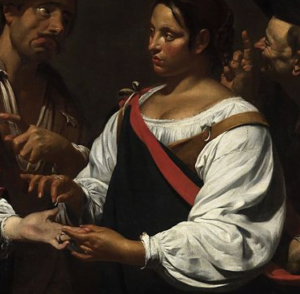 The second woman in this painting is a stark contrast to the woman in pink. She has an olive complexion and is wearing clean clothing that appears to be of a sturdy material. She wears a red 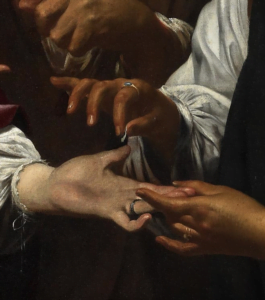 bag made out of a sash around her shoulders. She is holding with her right hand what could be a coin (or possibly a slim stone) and hovering it over the woman in pink’s left hand. She appears to be making eye contact with the woman in pink, who we already noted is not looking at her. She has a serious expression on her face. Is it distrust? Is she trying to convey something serious?

Finally, we have the fourth figure and the second man. He is dressed simply. He almost disappears in shadow. He is looking towards the man on the left and is gesturing with his right hand to be quiet, to look up, or to wait a second. He is smiling suspiciously while he does this.

If you follow down to the left hand, it is obvious that he is reaching into the red bag to take something out. Could he be a thief?

Now with some details revealed upon a close inspection, what do you think is going on? We invite you to think about it for a moment before moving on to the next two questions.

What are the relationships of each individual?

Clearly, the first divide between the individuals is between the lady in pink and the three others. She is an obvious image of finery compared to the other three, not only depicted by her clothes but also by her stance. She is the only one not looking at anyone else in the painting but at someone (or someones) in front of her. One can see that she is only really interacting with the woman in front of her. The woman with the red sash is holding intense eye contact with the lady in pink. Interestingly, they both seem to be completely oblivious to what is going on around them. 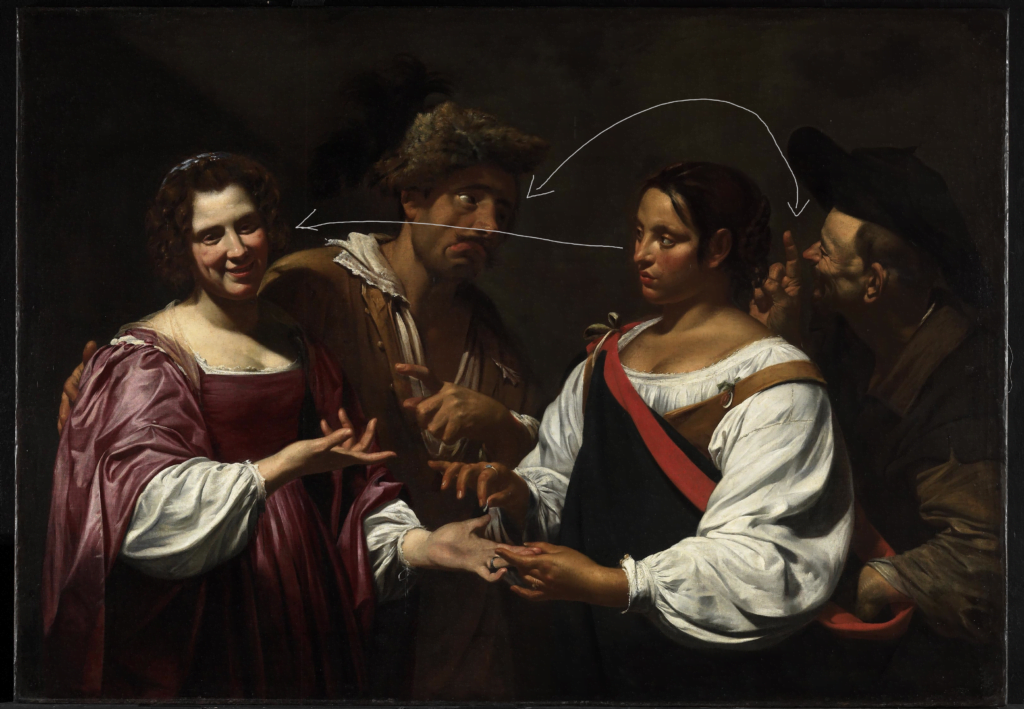 The links between the figures in the painting are quite apparent when looking at eye contact.

What is going on?

The most useful clue is in the title: “The Fortune Teller”. Between the woman in pink and the woman with the red sash, it is apparent that the woman with the red sash is the likelier candidate to be a fortune teller. She is holding open the palm of the woman in pink, and likely using the object in her right hand to read palms. Unbeknownst to the Fortune Teller, who in history is often depicted as a thief, she herself is being victim to a crime. Her tense gaze at the woman in pink is likely a show to create a solemn heaviness to the fortunes she will be telling. However, this concentration leaves her vulnerable. The man to the far right is covertly putting his left hand into the Fortune Teller’s sash likely for the purpose of stealing. Why do we think of stealing? Well, his other hand is gesturing to the man on the left to either be quiet, stall for longer, (or possibly to look up) all the while grinning like a Cheshire cat.

The man with the feather hat seems to be pointing to the woman in pink with a morose expression, possibly upset that she was not the chosen subject for crime. He has his hand placed around her shoulders – could he have brought her here in the first place? It could be that she was the original victim and that he brought her over to distract her with the Fortune Teller.

Finally, the woman in pink is cheerfully gesturing towards the three while looking at the audience. Could she be aware of the spectacle around her, and inviting the viewer to enjoy it as well?

Through this painting, Vouet brought us a theatrical depiction of a thief (Fortune Teller) becoming the victim.1

Disclaimer: There is no official interpretation of this painting, and there could be many correct ones! The interpretation featured here is what we thought could be a plausible one. Please let us know what YOU think in the comments!