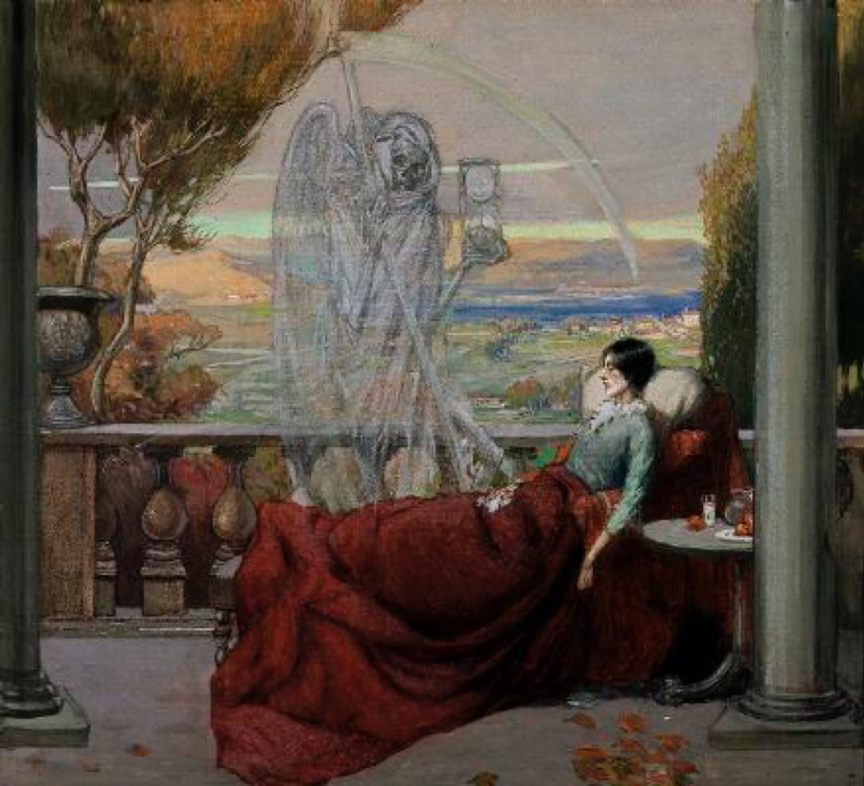 This piece by Robert Tennant Cooper, commissioned in 1912, depicts a young woman lying in bed on a balcony. An ominous figure lurks by her bedside with an hourglass. Without the figure, the scene appears almost calm and peaceful with a beautiful landscape beyond the balcony. Observe the piece to come up with a potential diagnosis for the woman lying in bed.

What might the woman lying in bed be suffering from?

The woman in the painting appears to be visibly unwell. She is pale and appears thin despite the food and drink beside her. She appears weak with her arm hanging limply at her side. Meanwhile, the ominous figure likely represents Death as it holds an hourglass to symbolize that the woman does not have much time left to live. This painting is depicting a woman suffering from tuberculosis (TB), and possibly being treated in a TB sanatorium. TB was a common disease around 1912 in England when the painting was commissioned.​1​ TB sanatoria were medical facilities located in open alpine or seaside air. Patients were provided with good food, because it was believed that TB could be cured with open-air living and nutritious food.​2,3​ The woman displays: weight loss, anorexia, and malaise – symptoms seen in patients with TB.​4​ In fact, the painting is named “A sickly young woman sits covered up on a balcony; death (a ghostly skeleton clutching a scythe and an hourglass) is standing next to her; representing tuberculosis”.​1​

TB is caused by the bacteria Mycobacterium tuberculosis. M. tuberculosis usually infects the lungs but may also infect other organ systems such as the gastrointestinal tract, genitourinary tract and central nervous system.​4​ When a patient is initially infected with M. tuberculosis the infection may progress to a primary disease, latent infection or be cleared completely.​4​

What are the stages of TB infection?

TB is transmitted when a host inhales M. tuberculosis; initially the alveolar macrophages will try and destroy the virulent bacillus.​4,5​ If the macrophage cannot do so, the infection will move on to stage 2.

The development of the immune response 2-3 weeks after infection results in cessation of unimpeded growth. CD4+ helper cells are essential to this response and release cytokines that activate the bacilli filled macrophages to kill them. The infection is walled off by epithelioid cells forming a granuloma. Flu-like symptoms develop at this stage.​4​

Months to decades after the initial infection, TB may progress to stage 4. This typically occurs when the host becomes immunocompromised and reactivates the infection.​4,5​

What populations have increased risk of TB?

When a patient has a latent TB infection, there is a 5-10% risk of developing an active infection.​6​ The risk factors for progression to active infection include, but are not limited to young age, low body weight, diabetes mellitus, substance abuse, gastrectomy or jejunoileal bypass, history of untreated/inadequately treated TB, immunosuppressive disease, immunosuppressive therapy, and low socioeconomic status.​6​

How does it present clinically?

The common presenting symptoms include cough for over 2-3 weeks, low grade fever, anorexia, weight loss, malaise, and night sweats. The cough typically begins as a dry cough and then become productive.​4​ The less common presenting symptoms include pleuritic chest pain, hemoptysis, dyspnea, clubbing and erythema nodosum.​4​ On respiratory exam there may be no findings or crackles, bronchial breath sounds or amphoric breath sounds.​4​

What is the diagnostic workup?

Although, institutions may differ by protocol, there are five initial investigations that should be ordered.​4​ The first is a chest x-ray where the classical findings are focal infiltrates in the upper or lower lobe(s).​7​ There may also be cavities, fibrosis and/or hilar and mediastinal lymph node enlargement.​7​ Patients may not present typically if they have an advanced comorbid HIV infection.​7​ A patient should produce three sputum samples for testing.​4​ The first for a sputum acid-fast bacilli smear where the presence of stained dye indicates a positive result.​4​ The next sample should be used for a sputum culture.​4​ The third sample should be used for a nucleic acid amplification test.​4​ Lastly, a CBC should be ordered with elevated WBC and low hemoglobin being suggestive of infection.​4​

In order to establish a definitive diagnosis, M. tuberculosis must be isolated from a bodily fluid or tissue.​7​ However, this finding will not be evident in all cases and in some cases a clinical diagnosis based on history, physical exam and other investigations is sufficient to begin treatment.​7​

The diagnostic workup for latent TB includes the tuberculin skin test or the interferon gamma release assay.​8​ Furthermore, an active TB infection must be ruled out by history, physical exam and chest x-ray.​8,9​

Since TB has airborne transmission, all suspected and confirmed cases require airborne precautions. In Canada, the standard treatment regimen is divided into the initial phase and continuation phase.​10​ For patients with a low risk of relapse, this entails 2 months of isoniazide, rifampin, pyrazinamide, and ethambutol daily or 5 days/week in the initial phase, followed by 4 months of isoniazide and rifampin daily or 3 times/week in the continuation phase.​10​ The ethambutol can be stopped in the initial phase once it is determined that the specimen is susceptible to all first-line drugs.​10​ Patients who are at risk of relapse if after 2 months of treatment, they have evidence of more extensive disease and/or cavities on chest x-ray, evidence of a cavity after full treatment, have a positive culture after 2 months of treatment, or co-morbid HIV infection.​10​ These patients should be treated in the continuation phase for 7 months, for a total of 9 months of treatment.​10​

For patients with latent TB infection that are receiving treatment, the standard regimen is isoniazide daily for 9 months.​9​

This post was copyedited and uploaded by Kim Vella.

Sabrina Yeung is a medical student at University of Toronto. She is interested in visual arts and hyperrealism.