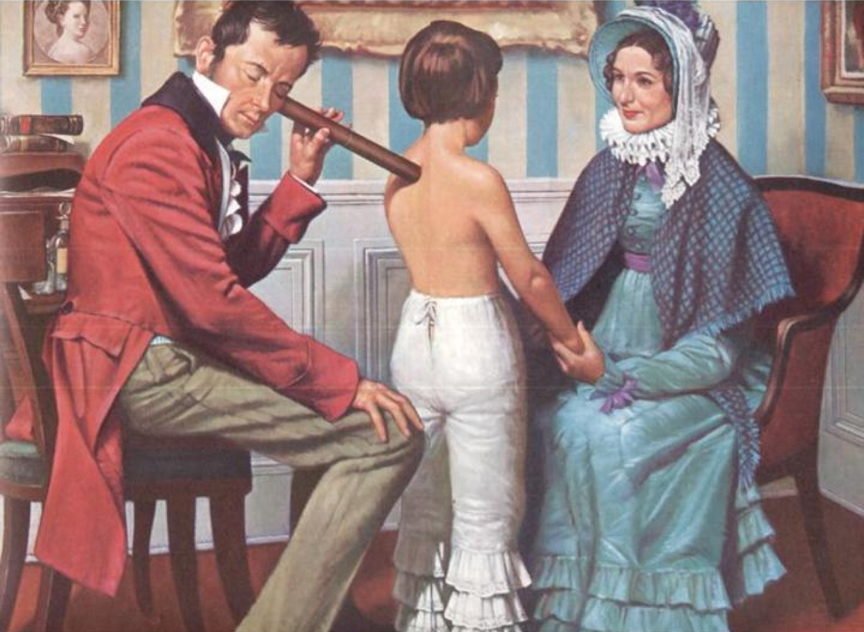 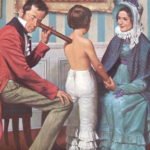 Yesterday (March 30th, 2018) was National Doctor’s Day in the United States, and we thought it would be fitting to do a feature on arguably one of the most symbolic tools in medicine.

What is the tool portrayed above?

The painting above features Rene Theophile Hyacinthe Laennec using an early version of his invention – the stethoscope. 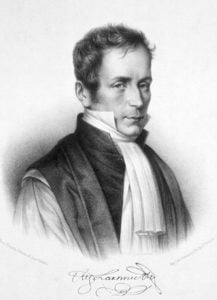 To the left is a portrait of Rene Theophile Hyacinthe Laennec. Born in 1781, he was sent to live with his uncle Dr. Guillaime-Francois Leannec after the passing of his mother at only 5 years of age. Laennec became involved with treating patients at his uncles clinic as young as 14 years old. However, his father was not at all pleased and convinced Leannec to pursue anything other than medicine. As a result, Leannec spent a small portion of his youth learning to play the flute, poetry and learning Greek and Latin among other adventures. However, in 1799, he formally decided to pursue medicine and enrolled at the University of Paris.

There were few diagnostic tools for physicians to use in the 1800’s, which meant that there was a strong reliance on the physical exam.

Auebrugger invented percussion in 1754 after watching his father determine how much wine was left in barrels by tapping down until the sound changed. This method lost popularity in the late 1700’s and early 1800’s, only to be revived again by the advocacy of Dr. Corvisart-Desmarets; a physician who also happened to be one of Laennec’s mentors.

Laennec was taught the importance of auscultation, which, at the time, was done by listening to the patients chest by placing an ear directly on the area of interest; this was called immediate auscultation. (La visita al hospital – Luis Jimenez Aranda)

Both of these tools were quite hands on, and worked typically well for the male soldiers Laennec saw during the war in his work at Salpêtriére. However, when he was appointed a physician at Hopsital Necker in 1816, what was a devout Catholic like Laennec to do when confronted by a woman? 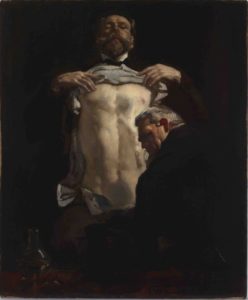 In 1816, Laennec was intently listening to the complaints of a young woman with chest pain. As any astute physician would do, Laennec needed to examine the heart. Unfortunately, the heart was rather inconveniently placed behind this patients ample chest.3

He attempted to palpate and percuss the front of the chest, but found that the use of this was “of little avail on account of the great degree of fatness“. With palpation and percussion of no use, he could only turn to immediate auscultation.  However, placing his head on the woman’s chest was against Laennec’s morals and this technique was “rendered inadmissible“.3

Luckily, the creative mind of Laennec recounted that sound can be amplified if heard “through certain solid bodies – as when we hear the scratch of a pin at one end of a piece of wood, on applying our ear to the other“. He rolled a “quire of paper” (i.e., 25 pieces of paper) into a tight tube and placed one end on the patients chest and one to his ear. He “was not a little surprised and pleased, to find that [he] could thereby perceive the action of the heart in a manner much more clear and distinct than [he] had ever been able to do by the immediate application of the ear“. 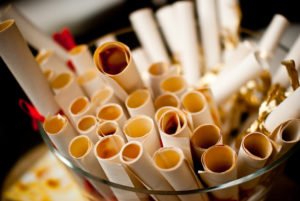 The first prototype of a stethoscope was tightly wound paper

Laennec immediately saw the potential for this device, and quickly began experimenting to try and improve it. He at first tightly wound large numbers of paper together to form a solid instrument. However, he found that the small opening left in the middle (the aperture) was “essential to the exploration of the voice“. He attempted to recreate this “cylinder” with different materials; work he was able to do as he made his own flutes from scratch. 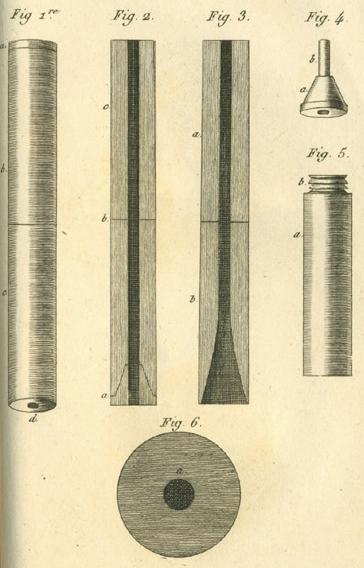 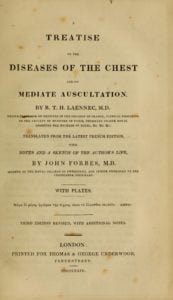 He put his device to the test at the Hospital Necker, both observing results from real patients, and dissecting their cadavers. He recorded his findings in “A Treatise on the Diseases of the Chest and on Mediate Auscultation“, and it is in his writings that we find, among many other ailments, the origins of diagnosing a pneumothorax or effusions, and even how to identify egophany, bronchophony, rhonchi, and bronchi. It is amazing to think that these concepts (and more), that we currently still teach and use, were discussed in a book published in 1829!

He called his invention the stethoscope after the Greek stethos (chest) and skopein (to explore / to see).

The Art of the Physical Exam

Maybe 100s of years from now physicians will wonder how we ever diagnosed anything with our modern day stethoscopes – just how we may wonder how anyone was able to diagnose a pneumothorax with a wooden tube. Sadly, the art of the physical exam has been on the decline since Laennec’s time.4,5 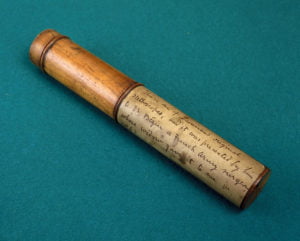 As early as 1993 Mangione et al found that only 27.1% of internal programs and 37.1% of cardiology programs in the United States had any form of formal teaching on cardiac auscultation.6 March et al (2005) found that the accuracy of licensed health care providers (of which physicians made up 59% of the sample and cardiologists 22%) to identify conditions with auscultation was 26.3% prior to formal teaching of cardiac auscultation, and only 44.7% afterwards.7

While there is some evidence that cardiac auscultation can equal the diagnostic accuracy of echocardiography when done by experienced cardiologists, this may not be the case for the average physician.8 Moreover, Verhgese et al (2015) found that of 208 medical error vignettes, 63% were caused by failure to even perform a physical exam and a large portion of the rest was due to  doing a poor one.9

Maybe one day the traditional physical exam will be completely replaced by the likes of POCUS or other advanced imaging. For now, a well done and appropriate physical exam is still part of the physician’s essential toolkit; we have Laennec largely to thank for his profound contribution by both his research into percussion and the sounds of the chest, and to his invention of the first stethoscope. 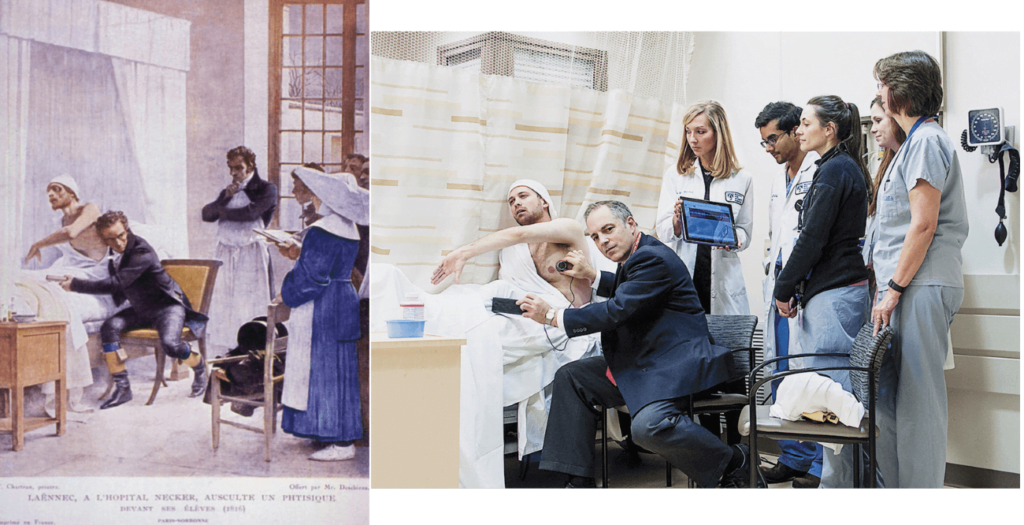 Left: Laennec using his cylindrical stethoscope to examine a patient with tuberculosis. Right: A parody of the left image, using electronic auscultation.