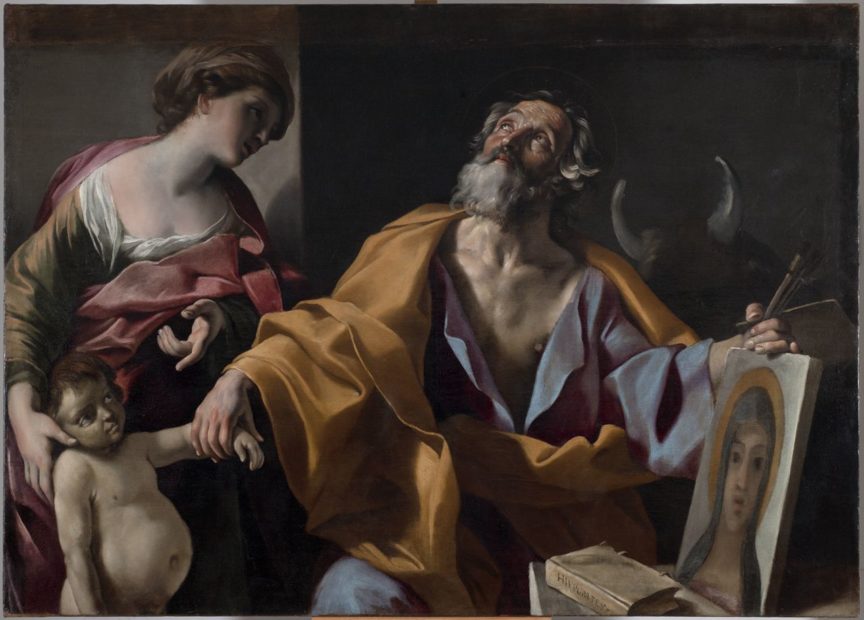 In this Spot the Diagnosis! post, we have the case of an ill looking child, brought in for healing by a worried mother. Through the symbolic ox, the haloed saint is identified as St Luke, a physician in the New Testament. (Note the book at his lap entitled “Hippocrates”.) (Can you also see St. Luke’s other noted profession? Answer: An artist!)

What does this scene depict?

This scene depicts three people: an adult woman, an elderly man and a young child. The woman is looking to the man in what appears to be a questioning gaze. Her right arm supports the child while her left hand gestures towards them. The man’s right arm holds the child’s limp arm, possibly to measure their radial pulse. He looks upwards as if to ask the heavens for assistance in how to heal the child.

Finally, the child is the most striking figure in the painting. They appear to be 2-3 years of age, judging by body proportion. They do not have the healthy glow of the woman and the man but are instead painted in gray almost bluish colours. The child’s belly is quite big, and their eyes and face indicates further swelling. Of note, their eyes are also the ashen gray of their skin. It seems like the child is not able to stand on its own, with the woman and man both physically supporting them. Even their head is leaning towards the woman’s hand in a possible gesture of being too weak to even support their own head. As a contrast to the pointed gazes of the man and the woman, the child’s gaze is unfixed and their affect completely flat.

What signs does the child display that could point to a diagnosis? 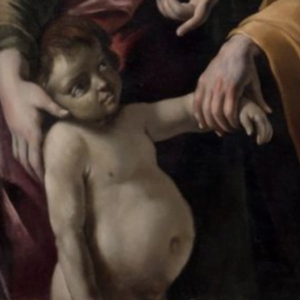 The child displays many signs pointing towards a pathology.

What diagnosis do these findings point to?

The toddler’s blue-tinged lips and eyes, grey skin, lethargic appearance, and edematous abdomen and extremities point towards a diagnosis of congenital heart defect. While the differential diagnosis for edema is broad, including conditions that cause low albumin such as malnutrition, liver disease and kidney disease, the child’s blue-grey eyes and lips hint towards a concurrent central cyanosis, which is consistent with congenital heart disease.1

More specifically, it is speculated that this child suffers from a ventricular septal defect (VSD). The age of the child provides an important clue to the diagnosis. While more severe congenital heart lesions may be lethal at a much earlier age, children with VSDs generally appear healthy at first. Over the course of a few years, the chronic left to right shunting of blood leads to the development of Eisenmenger syndrome, which is a cyanotic condition. 1

The only feature of this child that is inconsistent with the diagnosis is his well-nourished appearance. Generally, infants and children with cyanotic heart lesions experience failure to thrive. One speculation for this discrepancy is the artistic preference of the time, which includes depicting their subjects as healthy and robust.1

What is the pathophysiology of the condition?

VSD is an acyanotic heart defect at first. Oxygenated blood from the left ventricle is shunted to the right, since the pressure in the left ventricle is greater than the right. Over time, this shunting of blood to the pulmonary circulation leads to chronic right-sided volume overload, which results in rising pulmonary vascular resistance. The pressure in the right eventually exceeds that of the left, resulting in deoxygenated blood from the right ventricle to bypass the pulmonary circulation and enter the systemic circulation without being reoxygenated. Thus, children become cyanotic. This is known as Eisenmenger’s syndrome.

What is your differential diagnosis?

For any infant or young child with cyanosis, it is important to consider the following conditions on your differential diagnosis, and to treat them all empirically and simultaneously to avoid delaying any life-saving therapy.2

What physical exam findings may you find in this diagnosis?

With VSD, infants may appear dusky in color, lethargic, dyspneic, and cachexic due to failure to thrive. They often have a concurrent respiratory tract infection. However, many may also be asymptomatic. The precordial exam may reveal a holosystolic and diastolic murmur in keeping with the abnormal flow of blood through the defect during the cardiac cycle.34

Once the child progresses to Eisenmenger syndrome, they develop a dusky-blue colour from central cyanosis, edema from congestive heart failure, digital clubbing from chronic hypoxia, and intermittent “Tet spells” in times of compromised pulmonary blood flow such as crying or vigorous exercise. They are usually older in age than other infants with cyanotic heart disease, since it takes time for the reversal of shunting to develop.2

What investigations should you perform?

What are the initial management pearls?

As with any patient, stabilization is the first step to treatment. Ensure that the cyanotic child is warm and oxygenated while treating any other underlying abnormalities such as hypoglycemia and acidosis. Prepare for intubation in case the child deteriorates rapidly.

For infants, administer prostaglandins to maintain patency of the ductus arteriosus. Consult cardiology if you are suspecting congenital heart disease. If the patient develops cardiogenic shock, provide ongoing fluid resuscitation and inotropic support.

Keep a broad differential and assess for other causes of cyanosis, congenital heart disease is not the most common cause of pediatric cyanosis. As such, continue to administer fluids, oxygen therapy, empiric antibiotics until the etiology can be elucidated.2