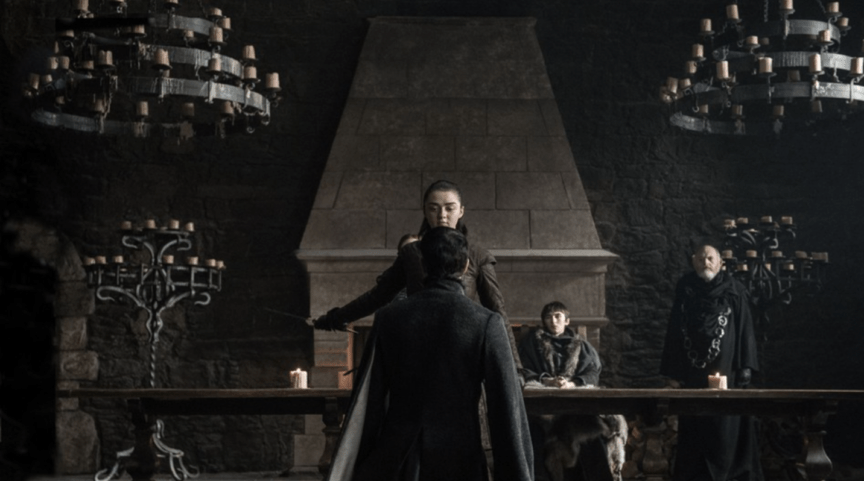 On a cold winter’s day in Winterfell, a middle-aged man by the name of Lord Baelish was stood in front of the Northern and Vale lords to answer for his crimes. His cunning and deceitful nature nature has finally led to his demise. After taking back the North from Lord Ramsay Bolton, Lady Sansa Stark was prepared to punish Lord Baelish for years of lies, betrayals, and murders. Lady Arya of House Stark approached Lord Baelish and drew her dagger before quickly slitting his throat. Medical attention could not be provided. The patient went into immediate distress and began bleeding from a large wound to the anterior neck. He became unresponsive within 10 seconds of the injury and fell to the floor.

On exam, a Zone 2 or 3 penetrating neck wound was noted. The exact location of the laceration was difficult to clinically determine. The horizontal wound measured approximately 10cm in width and occurred possibly just below the level of the cricoid cartilage . The platysma had obviously been violated. Patient immediately covered the wound with his left hand, thus is was difficult to ascertain the type of vascular injury. A large amount of blood was lost from the wound but an accurate quantitative assessment could not be provided. The patient was dysphonic and in acute distress immediately after the injury. Neurological exam was not performed. No further laboratory investigations or imaging were deemed appropriate given the social context.

Lady Sansa Stark and Lord Petyr Baelish’s relationship goes back to the beginning of King Joffrey Baratheon’s rule in King’s Landing (his death was covered previously – link). It was there where he told Sansa “Look around you. We’re all liars here – and every one of us is better than you”. Unfortunately for him, his lies led him to suffer a brutal execution in Winterfell with Lady Arya slitting his throat with a dagger. Penetrating neck trauma account for 5-10% of all trauma cases and is the leading cause of death under the age of 46 in the USA.​1​ Complex vascular, nervous, and respiratory/GI anatomy in the neck underly the challenges of managing these patients. In this article, we will give a brief overview of clinical considerations in these patients, while delving deeper into airway management.

An approach to penetrating neck injuries focuses on anatomically distinct zones: Zone 1 is from sternal notch/clavicles to the cricoid cartilage, Zone 2 is from cricoid cartilage to the angle of the mandible, Zone 3 is from the angle of the mandible to skull base. As previously explained, the wound in this patient was a Zone 2 injury as it occurred just above the level of the cricoid cartilage. Zone 2 includes important structures such as the common carotid arteries, internal jugular veins, and the trachea/esophagus. Disruption of the platysma indicates a strong possibility of injury to these underlying structures. Blunt injuries must still be considered even in cases of penetrating trauma. Direct penetrating trauma to the airway is quite rare due to the protection of the laryngeal apparatus and only occurs in 1% of all trauma cases.​2​ The cricotracheal junction is particularly vulnerable to injury given the weaker connective tissue.​3​ In this case, Lord Baelish immediately suffered from hoarseness and dysphonia, which suggests an airway injury.​2​

Management of trauma patients follows the principles of Advanced Trauma Life Support (ATLS).​4​ However, given the potential for rapid exsanguination from the major vessels of the neck, immediate management of circulation by providing direct pressure to the bleeding site is recommended while the airway is being assessed.​5​ These patients should all be considered to have a difficult airway as rapid deterioration of the patent airway could result from an expanding hematoma or airway injury. For this reason it would have been ideal to set-up airway equipment for this patient even if they were initially stable. Important pieces of equipment in penetrating neck trauma include suctioning devices, different sized endotracheal tubes, supraglottic airway devices, and surgical airway equipment. Bag-valve-mask ventilation should be minimized or done carefully to avoid distorting anatomy or worsening the injury.​6​ C-spine immobilization is only recommended in those with focal neurological deficits and has been associated with increased mortality in a retrospective study of 199 patients(p<0.02).​7​ Otolaryngology and Anesthesia should be consulted if available. Given Winterfell is the capital of the Northern Kingdoms, we expect that multiple specialist maesters would be available for consult.

Early management of the airway in this case is preferred to avoid worsening of patient’s injury or clinical deterioration. Signs of airway injury requiring immediate intubation include hoarseness, stridor, dysphonia, subcutaneous emphysema, bubbling at wound site, and hemoptysis.​4​ Consideration must be given to the patient’s clinical status and disposition (ie. to CT/OR) etc. Coordinating with Otolaryngology may be beneficial. It is preferred to intubate the patient in the OR, however in a crashing patient, intubation or cricothyrotomy may have to be attempted in the ED. Uncooperative patients present a unique challenge in that their own actions may lead to worsening bleeding and airway compromise; in these cases, early intubation is crucial and may have to be performed in the ED.

Likely due to the huge range of potential presentations, there is no consensus on airway management in penetrating neck trauma. Multiple techniques have been described in literature: RSI, dissociative intubation, awake fiberoptic intubation, primary surgical airway, cricothyrotomy, and intubating directly through the wound site.​6,8​ It is thought that an unstable airway which is being maintained by the patient’s muscle tone and reflexes may be converted to an obstructed airway with a paralytic during RSI, worsening the situation. An awake technique may avoid this issue. However, in a study of 58 patients requiring immediate airway management following penetrating neck trauma, 39 received RSI with succinylcholine achieved an 100% success rate.​8​ Likewise, in 107 patients, direct laryngoscopy with RSI was performed in 89 cases with a 98% success rate.​9​

Nevertheless, awake intubation remains preferable in cases of penetrating neck trauma. Stable patients should be topicalized with lidocaine such as 4% lidocaine spray. If the level is above the vocal cords, direct laryngoscopy or video laryngoscope can be attempted. Dr. George Kovacs (@kovacsgj) describes a triple set-up with using a video laryngoscope to obtain the view, then adding a flexible intubating scope with cricothyrotomy kit as backup.​9​ Shearer 1993 reports a case where a blind nasal intubation aggravated an expanding hematoma, leading to tracheal deviation, unsuccessful surgical airway rescue, and subsequent patient death.​10​ Other authors have also recommended to avoid the use of blind nasotracheal intubation in penetrating neck trauma. It is important to note that if an injury is suspected to be below the level of the vocal cords, the endotracheal tube or bougie may advance into a false passage, and in these cases a flexible endoscopic approach is preferred. If this technique is not available due to a lack of equipment, experience, or clinical status, intubating cautiously with a smaller endotracheal tube can be attempted. A primary surgical approach, below the level of the injury, may be appropriate in cases where there is severe anatomic distortion to the airway. Based upon this literature, we recommend the following pathway:

Unfortunately, many of our medical advances in airway and ventilation were not available at Winterfell. Without modern devices, intubation and protection of the airway becomes increasingly difficult. In terms of sedative medications, Maester’s frequently used both Essence of Night Shade and Milk of the poppy. Essence of Night Shade is a powerful oral sedative dosed at 3 drops into a cup of wine for a deep dreamless sleep.  Extremely precise titration is warranted as 10 drops can be fatal to the average-sized person. As far as we know, there are no analgesic properties to this medication. Milk of the poppyis both an analgesic and sedative. At low doses it is used for pain management though it can be extremely addictive. At higher doses it induces a state of unconsciousness that is often used for surgery in the Seven Kingdoms. In this case, we recommend Milk of the poppy, as it offers several advantages including its additional analgesic properties and ease of titration.

We do not recommend this set up as it creates positive pressure above the level of the vocal cords, possibly aggravating an airway injury. During the 1700s-1800s, physicians were able to use a guided subglottic intubation technique akin to our current techniques in airway management, and tracheotomies were performed by surgeons (11). The devices to guide a subglottic intubation may have been quite primitive during those times, increasing failure rates of oropharyngeal intubation. Thus, depending on the maester’s familiarity with the technique, we recommend a tracheotomy below the level of the injury as a first approach to successfully obtain the airway for Lord Baelish.

Ultimately, Lord Baelish suffered a brutal demise in the castle of Winterfell. He himself stated before that “Money buys a man’s silence for a time. A bolt in the heart buys it forever”. Unfortunately for him, it was not a bolt in the heart, but a fatal Zone 2 neck injury that lead to his demise. If he were resuscitated at the time, we would recommend that the Maester’s perform an emergent tracheotomy while using Milk of the poppy for sedation and analgesia. This technique would likely provide the best chance to securing the airway while minimizing difficulties in visualizing the oropharyngeal airway, preventing aggravating possible airway injury, and avoiding medication error with Essence of Nightshade. However, resuscitation was not attempted, and his body laid on the bare cold floor of the castle. With his death, many souls through the Seven Kingdoms were avenged and may finally rest in peace.

Penetrating neck injuries are dramatic presentations that can strike fear into the heart and mind. Priorities are to prevent exsanguination and establish or preserve a threatened airway. An early call for help is important particularly where special expertise and equipment might be ideal for injuries that distort or bleed into the airway. Injuries below the cords are best managed by surgical approach or in stable cases by flexible endoscopy.