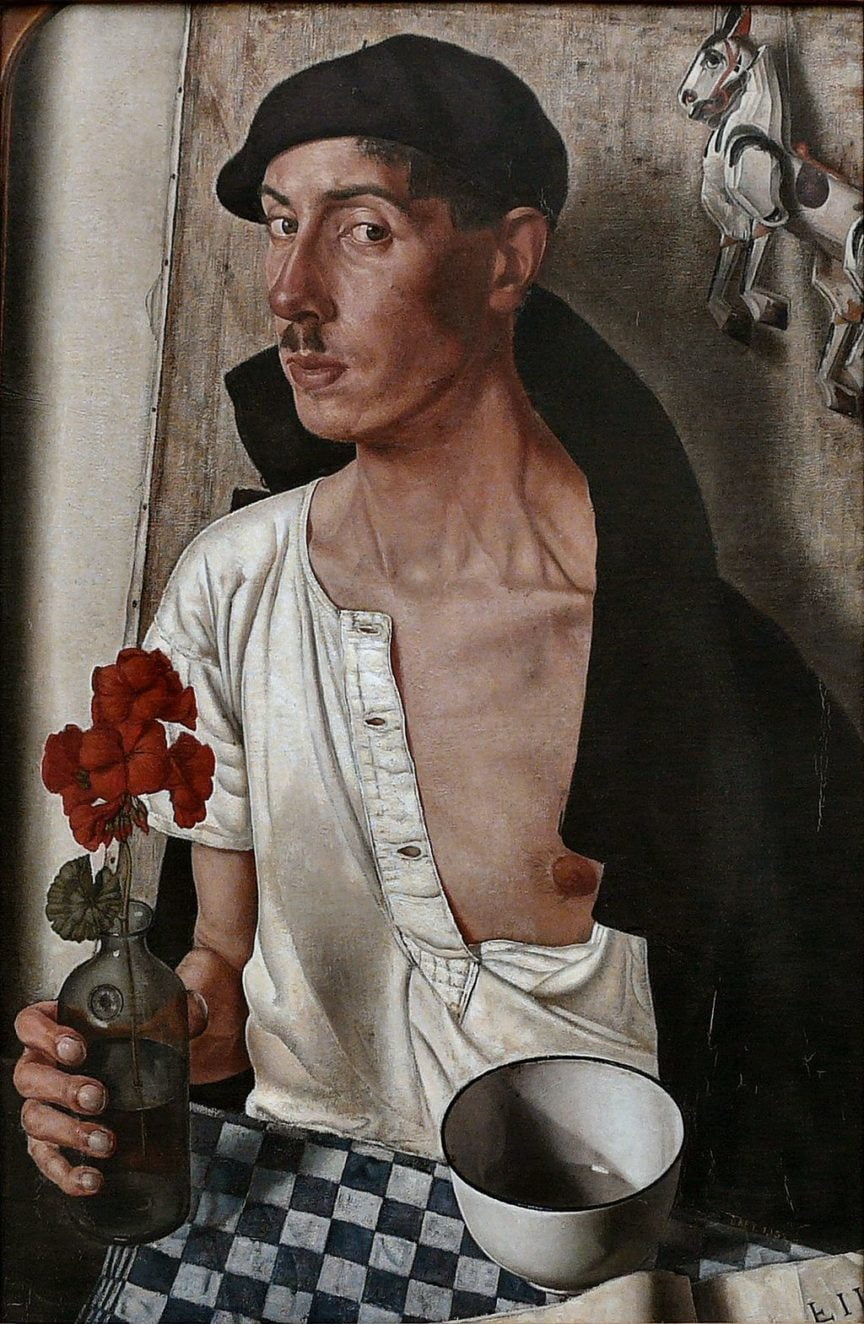 As part of the Arts PRN series, we will intermittently be featuring pieces of historic art that hint at an underlying medical condition. They say a picture is worth 1000 words… can you Spot the Diagnosis after examining only a painting? Read on to learn not only about the art, but about these fascinating medical conditions. Who knows, maybe they’ll help you make a diagnosis some day (or at least help you out on Jeopardy)! After you read, consider submitting your own art to the Arts PRN Project.

A lover of self-portraits and still-lifes, Dick Ket is a Dutch painter who spent most of his life as a recluse, creating artwork in his parents’ secluded home. Unfortunately, he died at just 37 years old as a result of deteriorating health from a life-long medical condition. What diagnosis do you think Ket may had have based on his self-portrait? Special thank you to Dr. Courneya (the creator and curator of White Coat Warm Art – a very successful art gallery held every year at CCME) for sending in this painting that she spotted at a gallery abroad!

What does this man have? (Click for the answer!)

Dick Ket is widely speculated to have suffered from Tetralogy of Fallot with dextrocardia. Based on his numerous self-portraits, such as the one above, he appears to have: clubbing of the digits, peripheral cyanosis, and plethora. These findings, along with known details of his life, point toward a congenital cyanotic heart disease.1

Digital clubbing is one of the most intriguing and ancient clinical signs. It was first described by Hippocrates on a woman with empyema.2 Since then, this deceivingly simple physical finding has been associated with a long list of serious conditions, including Ket’s congenital heart disease.

Digital clubbing is defined as a bulbous enlargement of the terminal ends of fingers or toes. Clubbing is usually bilateral, but can also be unilateral. Pseudoclubbing is when there is asymmetric involvement of the digits.3 Clubbing has a strong association with serious chronic pathology, so it is important to note the presence of clubbing in patients and explore the presence of other clinical signs.4

Clubbing of the fingers.5

What are the physical exam findings for clubbing?

Clubbing can be assessed using several objective criteria on physical examination. One popular maneuver is the Schamroth window test, which involves asking patients to place the dorsal aspect of two distal phalanges on opposite hands together. A diamond-shaped window between the two fingers is normal; absence of this window is a positive Schamroth sign and suggestive of clubbing.3 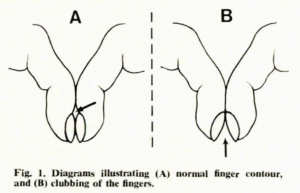 Another way to assess for clubbing is via the Lovibond angle, which is the angle made by the nail bed and the distal finger in profile view. A normal angle is around 160 degrees, while a clubbed finger has an angle of >180 degrees.3

What is the pathophysiology of clubbing?

The precise pathophysiology behind clubbing is not known. However, several theories have been proposed. One theory suggests that clubbing occurs when platelet clusters lodge in the peripheral capillaries of the digits and release platelet-derived growth factor (PDGF) and vascular endothelial growth factor (VEGF). These factors promote connective tissue proliferation and angiogenesis in the digits, which result in the clubbing appearance.3Other theories claim that hypoxia plays a role in clubbing. Local hypoxia stimulates the release of hypoxia-inducible factor (HIF), which activates VEGF to cause clubbing.3

What conditions are associated with clubbing?

Below is a list of diseases associated with bilateral clubbing:3

What is the work-up for clubbing?

The investigations for clubbing should be guided by the patient’s clinical presentation. Below are some lab tests and imaging to consider for certain history and physical findings.8

For more from the Spot the Diagnosis series, check out our other posts:

Spot the Diagnosis: The case of the Ugly Duchess

Spot the Diagnosis: The case of the Pale Woman