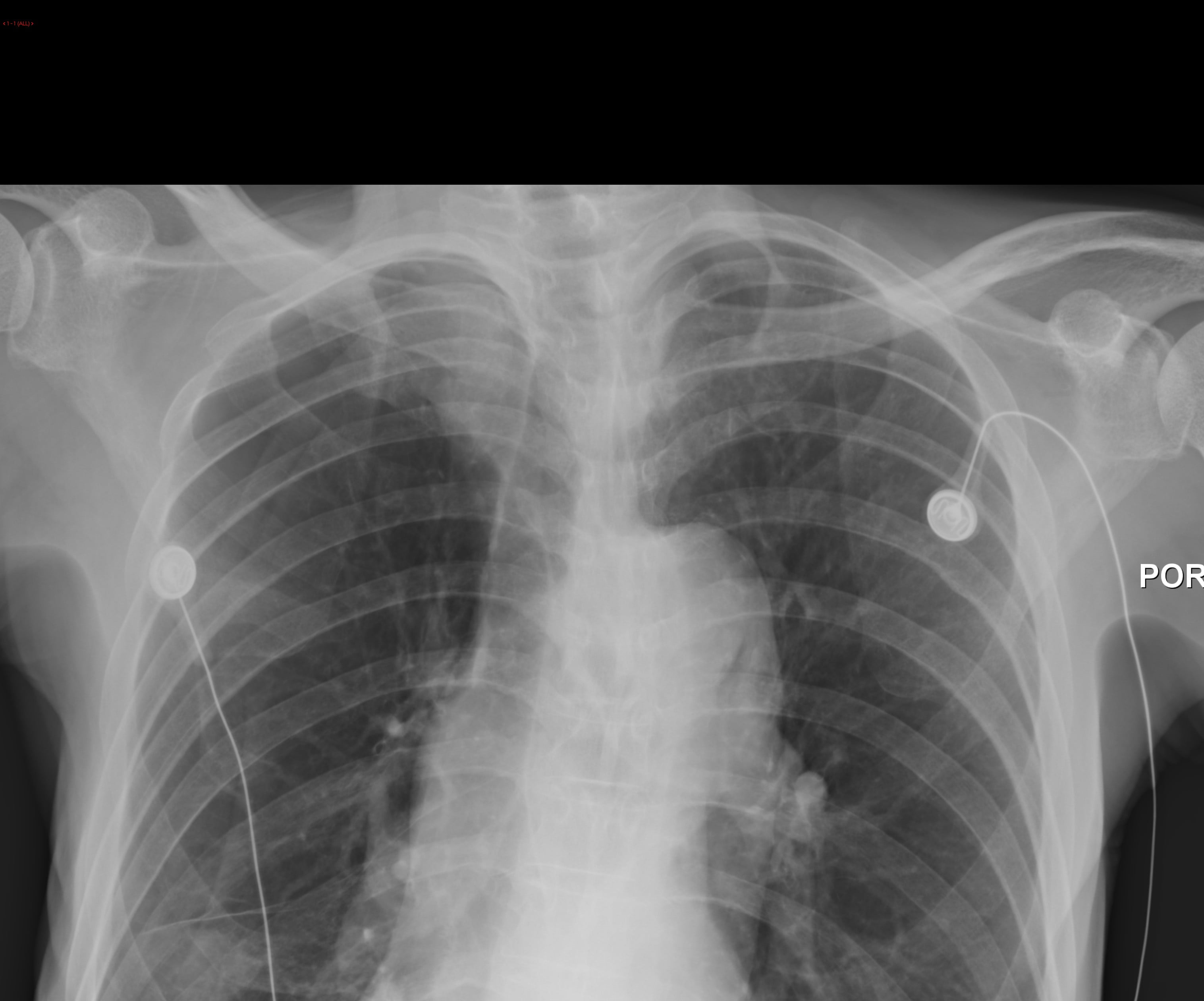 A 74-year-old male with a history of COPD arrived in the emergency department in respiratory distress. On physical examination, the patient was mildly tachypneic and had an oxygen saturation of 93% on a non-rebreather mask. On auscultation, the patient had wheezing and diminished air movement bilaterally. A supine chest radiograph (CXR) was obtained. A short time later, a radiologist called to confirm the presence of a “moderate sized right pneumothorax” (Figure 1). 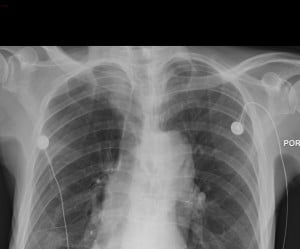 As a chest tube tray was being prepared, a bedside ultrasound (US) was performed and showed bilateral lung sliding. (Link to Case Video or simply see below.)

Is lung US more or less sensitive and specific than CXR in diagnosing pneumothorax?

Whereas our patient presented with a pneumothorax (PTX) presumably due to COPD, most of the evidence for the sonographic diagnosis of PTX is based in the trauma literature. Four recent meta-analyses have addressed the use of sonography for PTX, and all support ultrasound as vastly superior to supine CXR as evidenced by their sensitivities for diagnosing PTX. For all the included studies, the sensitivity of US and CXR for PTX detection ranged from 78.6-98% and 28-75%, respectively.

Of note, most patients included in these meta-analyses were trauma patients that underwent supine imaging; it is difficult to judge whether the characteristics of CXR might have improved accuracy if imaging were done in the upright or lateral decubitus positions [4,5]. The gold standard for diagnosis of PTX in each of these meta-analyses was demonstrated PTX on CT scan or a rush of air with chest tube insertion.

Now that we know US is more sensitive and specific than CXR in diagnosing PTX, how do we perform the test? The authors of a recent publication found that in supine patients, most pneumothoraces were located beneath the 5-8 intercostal spaces [7], which makes that the best place to start scanning. The most commonly taught sign of PTX on lung US is the absence of lung sliding.

In lung sliding, the visceral-parietal pleural interface (VPPI) appears as a hyperechoic (white) line beneath the cross-sectional cut of the ribs and moves back and forth with respiration. In PTX, this white line will not move with respiration. Recall that the patient in our vignette had bilateral lung sliding despite a CXR that showed moderate right sided PTX’. [Video 2: Moderate Pneumothorax]

The presence of lung sliding effectively rules out a PTX, but its absence does not necessarily rule one in (Figure 2), so correlating your sonographic findings with the clinical exam is important. 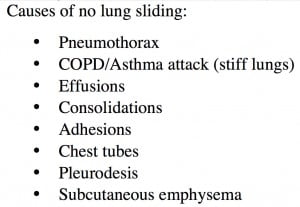 Figure 2 – Causes of no lung sliding.

If you don’t see lung sliding, the presence of comet tails or b-lines can be used to help rule out a PTX, since these artifacts originate from the visceral pleura [8]. [Video 3:  B-lines with no lung sliding.]

One sign thought highly specific for PTX is the lung point. This represents the limit of the PTX and is identified when both lung sliding and the absence of lung sliding are seen in one area. If this is present you will see the hyperechoic (white) pleural line sliding normally and right next to it an area that is not sliding within the same intercostal space.  [Video 4:  Lung point]

You can see a more detailed description of one here). Some physicians use m-mode in diagnosing PTX by US, but m-mode really has no role unless you need to print out a still image proving a PTX. A recent publication found that using m-mode decreases accuracy in diagnosing PTX versus using b-mode (i.e., normal US mode)[1].

When evaluating a patient with respiratory distress, ultrasound is vastly superior to supine or semi-recumbent CXR for diagnosing pneumothorax.

Because of the presence of lung sliding on US, a CT scan was performed. This showed emphysematous changes, worse in the right hemithorax, without pneumothorax (Figure 2). The patient avoided an unnecessary tube thoracostomy that likely would have caused deterioration from an iatrogenic pneumothorax. The cause of the false positive CXR finding was a skin fold combined with diminished lung markings peripherally due to emphysema.  The patient was subsequently treated as a COPD exacerbation, and improved clinically.

2.  Alrajhi K, Woo MY, Vailancourt C. Test characteristics of ultrasonography for the detection of pneumothorax: a systemic review and meta-analysis. Chest 2012;14:703-8

Review by an Attending
Expert Review by Dr. Paul Olszynski, University of Saskatchewan

As Jacob states, most of the cited studies looked at supine films. The authors of one meta-analysis [1] did make note this may underestimate the performance of non-supine chest radiographs (upright and semi-upright). Conventional medical teaching (yikes!) and the above-mentioned evidence suggest that upright posterior-anterior films are superior to supine chest radiographs. By how much? Hard to say, but I suggest it’s worth addressing.

Emergency physicians regularly diagnose spontaneous pneumothoraces in their dyspneic/short of breath (SOB) patients using upright chest films (inspiratory, expiratory—you name it!). Many have come to trust these images much more than supine films, and l suspect many of our colleagues will want to know how the different types of chest radiographs measure up (not to mention how well pleural ultrasound performs in assessing the SOB differential: effusion, consolidation, edema, etc…a post for another time I suppose!).

The performance of an upright posterior-anterior chest radiograph for the detection of pneumothorax is oddly difficult to find. One study from the American Journal of Roentgenology (AJR) [2] allows us to (slightly) side-step that question by instead comparing upright CXR to ultrasound in 285 patients who had undergone lung biopsy. With the limitations of being a small study, and these pneumothoraces being iatrogenic, the authors showed ultrasound was at least as good as an upright CXR.

Where does this leave us? As Jacob points out, in the supine patient, pleural ultrasound is superior to chest radiography. As for our non-supine patients (the ones with those spontaneous pneumothoraces that usually present and remain upright during bedside assessment), the limited evidence for ultrasound looks promising. I’d suggest you place them supine, have a good look as described in the post, and prepare yourself to know a lot more about your dyspneic/SOB patients, the risks they are facing before leaving for tests, and their disposition, long before they get that upright CXR.

1. Alrajab S, Youssef AM, Akkus NI, Caldito G. Pleural ultrasonography versus chest radiography for the diagnosis of pneumothorax: Review of the literature and meta-analysis, 2013.