What is the role of intravenous lipid emulsion in drug toxicity in the emergency department?

A 32-year-old male with depression and chronic neuropathic pain presents to your ED after an intentional overdose of 50 x 75 mg tablets of amitriptyline one hour ago. On exam, his blood pressure is 92/54 mmHg and his heart rate is 128 bpm. He is somewhat somnolent and gets rushed to your resuscitation bay from triage. His initial ECG shows a wide complex tachycardia (QRS duration of 122msec) with an R’ of greater than 3mm in aVR [Figure 1]. 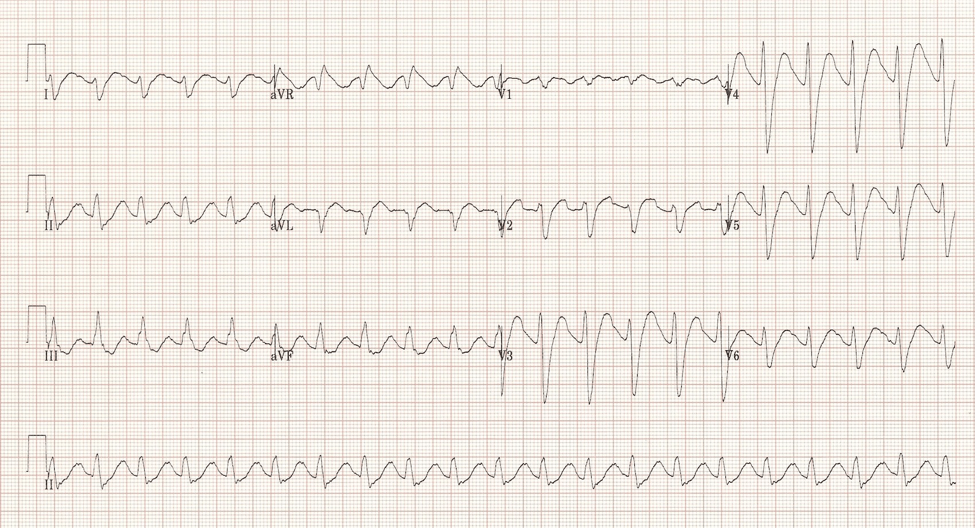 You gain intravenous access, initiate continuous cardiac monitoring, and begin administering intravenous sodium bicarbonate boluses. At the same time, you begin to think ahead to what vasoactive agent you might give, whether you will need antiarrhythmic agents, and what the evidence suggests for intravenous lipid emulsion in drug overdose.

Intravenous lipid emulsion [Figure 2] has been around for a long time in the form of total parenteral nutrition and as a vehicle for lipophilic drugs; most notably propofol.2 Its use in toxicology dates to the late 1990s when rat models demonstrated a survival benefit in bupivacaine toxicity.2 This led to further studies involving dogs and eventually humans.

In 2006, the first case report was published in which an adult male patient was inadvertently injected intravenously with 20 mL of 0.5% bupivacaine and 20 mL of 1.5% mepivacaine in the context of a brachial plexus block for rotator cuff repair. Shortly after injection the patient had a generalized tonic-clonic seizure followed by a 20-minute cardiac arrest with various cardiac dysrhythmias. Shortly before cardiopulmonary bypass was to be performed, 100 mL of 20% lipid emulsion was given intravenously, followed by 0.5 mL/kg/hr for 2 hours. Following this treatment, the patient was successfully electrically cardioverted. He was extubated 2.5 hours later.3

Since then, several other case reports have emerged and clinical guidelines have been developed for lipid emulsion therapy in severe local anesthetic toxicity.4–6 Case reports continue to be published highlighting lipid emulsion therapy for an ever-expanding number of drug toxicities including non-dihydropyridine calcium channel clockers, beta blockers, bupropion, lamotrigine, and tricyclic antidepressants.4 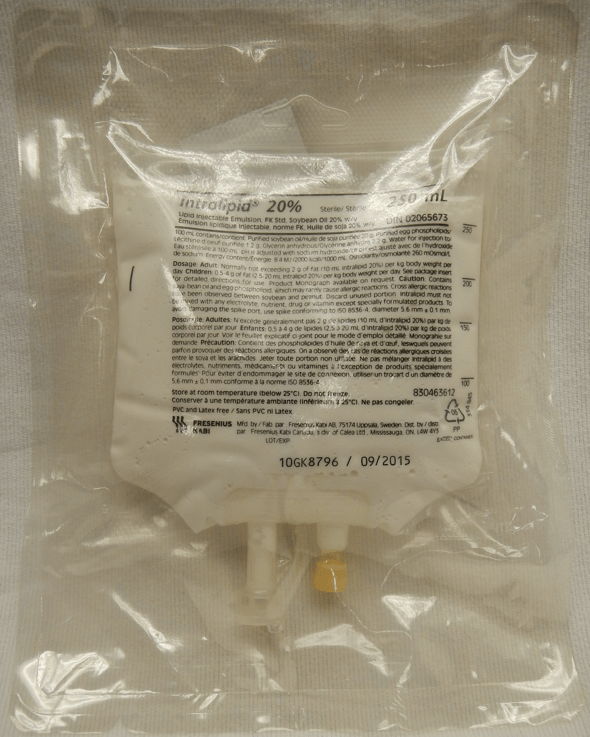 How does it work?

The short answer is, we don’t know. There are two prevailing theories that are most often quoted:

When should I use lipid emulsion therapy?

When it comes to severe drug toxicity we are often dealing with a patient with unstable hemodynamic parameters and a poor prognosis. Lipid emulsion therapy can be considered as a last resort in drug toxicity when:

An in-depth review of octanol-water partitioning coefficients is beyond the scope of this article. See Table 1 for several reference values.

Table 1: A selection of lipophilic medications and their partitioning coefficients.2

A 2016 systematic review supports this approach with a recommendation for lipid emulsion therapy, if other therapies fail, for bupivacaine toxicity (grade 1D) as well as toxicity due to other local anesthetics, amitriptyline, and bupriopion (all grade 2D).8 Recommendations were neutral for other drug toxicities. Lastly, lipid emulsion is usually readily available in most EDs and there are very few contraindications or major adverse effects.

What dose should I be giving?

This is where it gets challenging. Virtually all the case reports mentioned above have variations regarding dosing and every drug class has unique factors such as lipophilicity, pharmacokinetics, and pharmacodynamics. Fortunately, the protocols published by the American Society of Regional Anesthesia (ASRA) and the Association of Anaesthetists of Great Britain and Ireland (AAGBI) are quite similar.5,6

Simplified protocol based on 70kg person:

Don’t forget that these are guidelines based on local anesthetic toxicity. Case reports have wide dosing ranges and infusion times of up to 19 days depending on the offending drug!9

Are there any adverse effects?

Most of the evidence regarding adverse effects from lipid emulsion infusion comes from the use of total parenteral nutrition (TPN). Infusion rate and total infused dose are associated with adverse reactions.10 TPN guidelines recommend:

Nonetheless it is important to be aware that adverse effects including hypoxia, ARDS, fat overload syndrome, pancreatitis, and fat emboli can occur and that, when we venture into higher dose regimens than recommended, the risk of adverse effects increases.10,11

Unfortunately, your patient has had 3 episodes of cardiac arrest requiring defibrillation and repeated doses of sodium bicarbonate. In conjunction with your local poison centre, you choose to go ahead with lipid emulsion therapy given several recent case reports [Table 2] and a new guideline regarding lipid emulsion therapy in amitriptyline toxicity.9,10,12–15 You administer a 100mL IV bolus of 20% lipid emulsion followed by an infusion of 18mL/min. Your patient has return of spontaneous circulation with sinus rhythm at a rate of 135 bpm and a QRS of 132 msec requiring a continuous sodium bicarbonate infusion. Your intensive care colleagues arrive in the resuscitation bay and admit the patient to ICU. 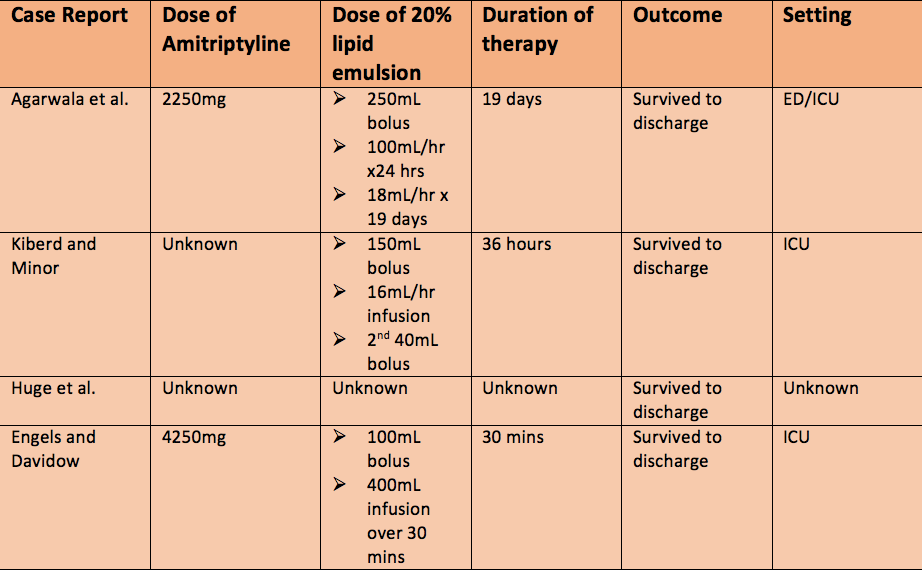 Intralipid: The Rule of Threes

One of my colleagues used to have a rule of threes: tell me three things in the differential, one - the most likely, two- the most lethal, and three - the most interesting.

Before considering using Intralipid I propose another round of three questions one might ask:
1. Have I maximized conventional therapy? Have I aggressively resuscitated cardiogenic shock with crystalloid, alkalization where indicated, and at least maximal doses of a vasopressor? Have I maximized status seizures with intubation, and the addition of Propofol or barbiturates?
2. Is the patient likely to deteriorate further based on what I know about the amount ingested, and natural history of this drug overdose? Clearly an early rapid deterioration may require Intralipid, but a slow decline over 24 hours may just warrant either upward adjustment of therapy, or acceptance of suboptimal goals of therapy such as a MAP slightly less than 65 mmHg. Other metrics may need to be assessed - do signs of vital organ perfusion, urine output and CNS function, remain normal?
3. Is the putative substance responsible likely to be lipid soluble? While it may not be possible to know the partitioning coefficient for every substance, an assumption may be that if the drug easily crossed the blood brain barrier causing CNS effects, it more likely than not is lipid soluble.
In the attached case presentation 5 medications for which supportive evidence suggests a benefit have these listed (Medication/Partitioning coefficient[logP]):
-Bupivicaine - 3.9
-Amitriptyline - 5.04
-Bupropion - 2.61
-Verapamil - 2.31
-Propanolol - 3.09

An easy way to remember these may be the last of a rule of 3’s:
-Sodium Channel Blockers (Tricyclic antidepressants, Local anesthetics, Lamotrigine, Class I antidysrhythmics)
-Beta-blockers (The exception here is only atenolol is highly water-soluble)
-Calcium Channel Blockers (Mostly the NON dihydropyridines)

Zane Horowitz
Dr. Zane Horowitz is the medical director for both the Oregon-Alaska poison centre and the Utah Poison Control Center, and he is a Professor of Emergency Medicine at Oregon Health Sciences University.
(Visited 23,990 times, 1 visits today)