A 35-year-old woman presents to the emergency department with severe, generalized abdominal pain. She has had two prior visits in the past ten days with discharge diagnoses of “abdominal pain, not yet diagnosed”. As you try to clarify the history, the patient begins screaming in apparent severe pain.

You have already reviewed the patient’s laboratory investigations drawn at triage, and imaging from prior visits; you identify no abnormalities. You attempt to examine the patient’s abdomen, which appears soft and non-distended, but even the lightest of palpation elicits a severe pain response from the patient. You inform the patient you would like to listen for bowel sounds; applying a similar and increased amount of pressure to the abdomen with the stethoscope does not elicit discomfort.

The patient begins crying unconsolably and angrily screams, “Why are you making me suffer in so much pain?”

Is this patient seeking opioid analgesics for non-medical use?

Prescription drug misuse — a more liberal term than the formalized ‘substance abuse’ and ‘substance dependence’ described in the Diagnostic and Statistical Manual of Mental Disorders V (1) — is defined as the use of a prescribed medication outside of the intent for which it was prescribed (2). Estimates of the prevalence of prescription drug misuse vary. In 2011, more than 1.2 million emergency department visits in the United States involved the misuse of pharmaceuticals (3). These patients tend to be young (less than age 40), have longer average emergency department lengths of stay, and are more likely to be admitted or return to the emergency department (4).

In 2009, Dhalla and colleagues published some alarming data regarding prescription opioid analgesics in the province of Ontario (5). In 2007, annual prescriptions for opioids reached nearly six per every 10 Ontarians. Between 1991 and 2004, opioid-related deaths doubled to 27.2 per million. Emergency department visits were common in this population, with nearly 60 percent of patients visiting an ED in the year prior to death.

Though emergency physicians cannot solely be held responsible for this prescription opioid crisis, 2013 data from the Centers for Disease Control and Prevention in the United States suggests that ten percent of opioid prescriptions in the emergency department are inappropriate, with high daily dosage and long-acting opioids for acute pain being the most commonly identified inappropriate practices (7).

Using PubMed, two separate searches were performed. These were:

The resulting article titles and abstracts were screened and relevant articles reviewed. In addition, relevant sections in Tintinalli’s Emergency Medicine were reviewed (8).

Drug-seekers are persistent and successful. In one study, suspected drug-seekers were explicitly informed they “would receive no further narcotics” from a particular academic emergency department (9). During the one-year study period, each patient averaged more than 12 visits to an average of four regional hospitals. Ninety-three percent of individuals in this cohort ultimately received narcotics from at least one of the seven regional hospitals surveyed. It is important to keep in mind that some patients might legitimately require frequent encounters or opioid analgesia and the reason for narcotic prescription was not provided in the study.

A 2013 study by Lee and colleagues retrospectively reviewed patients formally diagnosed with substance dependence following visits to the ED (10). Compared to the control group, ED patients later diagnosed with substance dependence received higher doses of opioid analgesia in the ED and more frequently returned to the ED within 24 hours of initial visit. These patients were also more likely to repeat a previous injury; report severe or uncontrolled pain; report allergy to an analgesic; request specific analgesics; and display aggressive behaviour. A similar 2012 study by Grover and colleagues identified the following as being associated with suspected drug-seeking patients: non-narcotic allergy; requesting medication by name; requesting medication refill; lost or stolen medication; out of medication; three or more pain related visits in different parts of the body; 10 out of 10 pain; three ED visits in 7 days; headache; back pain; and dental pain (11).

A 2014 prospective observational study by Beaudoin and colleagues followed a cohort of discharged emergency department patients aged 18 to 55 who received prescription opioids to determine factors predictive of misuse (12). Of the patients studied, 42% reported misuse. Misuse included at least one of non-prescribed self-escalation of dose, taking prescription opioids without a doctor’s prescription, or taking pain medications for a reason other than pain. In this cohort, the following were associated with misuse: presence of disability; chronic pain; pre-existing prescription opioid use; oxycodone use; or past 12-month risk of substance abuse as per the Drug Abuse Screening Test (DAST-10) score (13), which is shown in the table below.

The drug abuse screening test (DAST) is a measure of problematic substance use developed and validated by Dr. Harvey A. Skinner at the Addiction Research Foundation in Toronto, Ontario (now the Centre for Addiction and Mental Health). The DAST-10 version of the screening test performs comparably to the original 28-item score (14). In the Beaudoin and colleagues study, a DAST-10 score of 1 or higher was associated with prescription drug misuse. 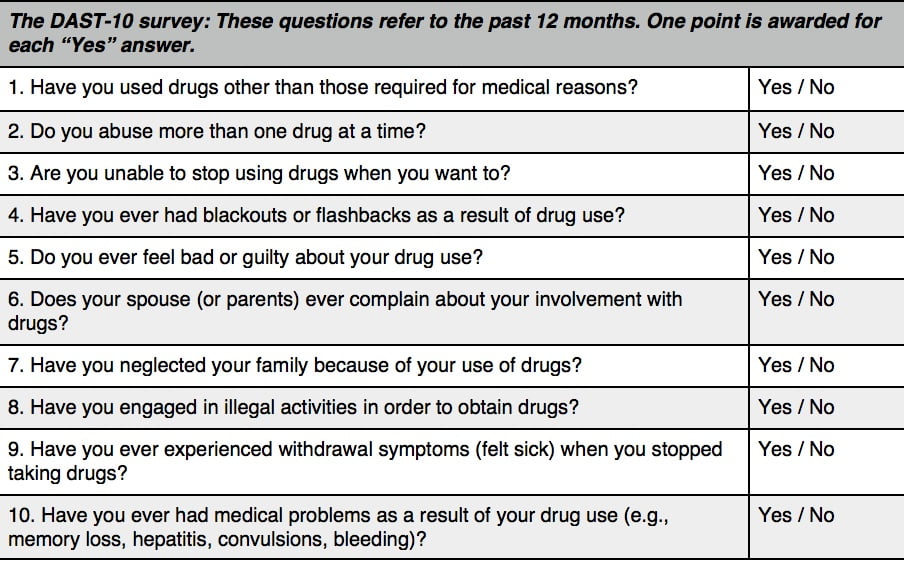 One of the several printable versions of the DAST-10 accessible online can be downloaded here.

Summary of the Evidence 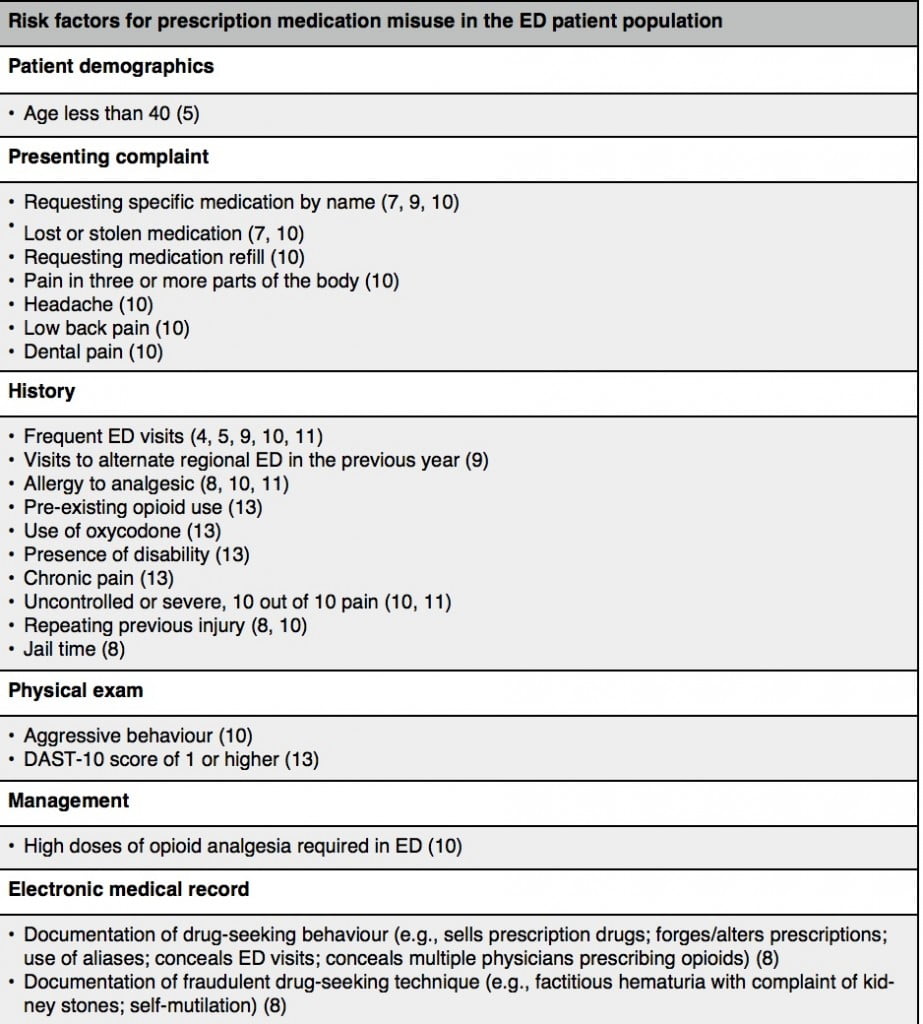 Returning to the Case

This is an uncomfortable, yet common ED scenario. It is important to realize that no single risk factor or behaviour is highly predictive of prescription drug misuse (15). This particular patient is less than age 40, has multiple recent ED visits, severe pain and is demonstrating aggressive behaviour. While multiple concerning features are present, the context of the patient presentation must also be considered.

In this particular case, there are no objective findings in the patient’s vital signs, prior imaging, or laboratory investigations to suggest a dangerous abdominal disease process. With most abdominal pathology, you would typically expect pressure applied with the stethoscope and hand to cause similar discomfort for the patient. Discussing the case with nursing colleagues can be helpful in gathering more data on the nature of this patient’s pain and might identify discrepancies in the history. If during daytime hours, you can attempt to obtain collateral history from other health care professionals or facilities this patient has previously encountered. When in doubt, there is no shame in explaining the situation to another ED physician and asking him or her to perform an independent abdominal exam.

Pressure can mount on the ED physician to prescribe an analgesic in this scenario. For example, a nursing colleague might express concern about the patient’s pain and ask if we can give her an opioid. If an opioid analgesic is being refused — as it probably should in this case — you should have an informative, calm and respectful explanation as to why the medication is being refused. Even still, patients can become unpredictably aggressive and you must be prepared to involve security where appropriate.

Opioid misuse contributes significantly to ED visits. Though the emergency medicine literature leaves more to be desired, an evidence- and context-based approach can help emergency physicians identify at risk patients and more confidently refuse prescription of an opioid analgesic. When drug-seeking behaviour is suspected, the facts should be well-documented in the chart to aid colleagues both in the ED and outpatient primary care setting. Emergency physicians must be part of the solution to this public health crisis—both local and national strategies are needed.

p.s. This topic was alse recently covered by the SGEM (woo Canada & #CanFOAMed). Be sure to check it out!

Reviewing with the Staff (Dr. A. Pardhan)

The challenge of determining which patients presenting to the ED are seeking opioids for non-medical use is one without an easy solution. On one hand, we want to treat patients who present with pain; on the other hand, we don’t want to prescribe opioids when they are unnecessary or may be abused. This challenge is exacerbated in the fast-paced, information-poor ED setting.

It is also important to remember that when patients who have an opioid dependence do require analgesia, they may require significantly higher doses than those who don’t.