The Federal government must engage in a healthcare discussion with Canadians; but the problem is that they’re not.

Lets be frank, Federal politicians don’t care about healthcare. They may say they do, but that is a fairly superficial statement, exemplified by the fact that none of the major parties have released a significant healthcare platform leading into the national election. This a major concern, because healthcare consistently ranks as a top priority amongst Canadian voters.

Further proof that federal politicians are reluctant to discuss healthcare comes from the lack of promotion and discussion regarding the Naylor report. The Naylor report was an advisory committee on Healthcare innovation and was supposed to be presented at a news conference in the spring – but was canceled and quietly published with little fanfare once it was revealed that it did not shine a favourable light on the state of healthcare innovation and support.

To be fair to the politicians, it isn’t entirely their fault – the Canada Health Act (CHA) essentially gives the Federal government an out when it comes to healthcare. The CHA provides conditions under which provincial and territorial health insurance programs must operate in order to receive federal transfer payments to fund provincial and territorial healthcare systems (simplified; provinces and territories must run their own healthcare programs, meeting minimal requirements. If they do, the government will transfer funding to them). However, the CHA only mandates the financial aspect of healthcare funding in Canada, and does not specify how care should be organized and delivered within each province or territory. 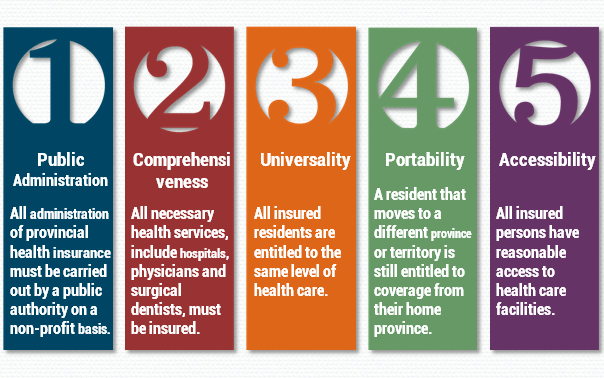 It ultimately falls upon each individual province/territory to structure and organize their approach to healthcare, and so it is no surprise that federal political parties seem to have very little interest in healthcare as a fundamental platform. The actual administration of healthcare in this country is under the jurisdiction of provincial and territorial governments.

The economy has been the number one issue in this federal election; and as a result you can sense why political parties are reluctant to talk about healthcare, because their responsibility is funding – an issue that will never make anybody happy. Increased funding is perceived as more spending in an already tight economy, while decreasing transfer payments may be construed as a decline in healthcare quality.

Currently; the Conservative party are proposing funding cuts to provincial and territorial healthcare programs by about 3%, while the NDP have proposed maintaining the status quo. Further to that; the NDP have suggested that they would increase funding to senior care programs and have hinted at the creation of a national pharmacare program. That is a relatively daring task, so while it is commendable that the NDP are making some recommendations, they are merely skimming the surface. The Liberal party has voiced that they would enter a national conversation with provincial governing bodies to evaluate the state of healthcare in Canada.

Beyond funding, however, there are some significant healthcare issues that the politicians aren’t talking about. Healthcare infrastructure is a huge unfunded liability, and has historically been funded by the federal government. Many hospitals and clinics are significantly aged, and poorly equipped to deal with 21st century medicine and healthcare. This issue is largely ignored by political parties, as it is an expensive consideration, but as we are preparing for the “Grey tsunami” of our aging population, infrastructure is an absolute necessity.

As previously mentioned, the Canada Health Act suggests conditions for each jurisdiction to receive federal transfers, and as a result this creates a different standard of care amongst each province/territory, and each governing health authority is free to dictate the structure of their healthcare system – creating national inequality.

Currently we’re sitting in a delicate equilibrium, but this inequality has the potential to create a disastrous situation for Canadians. As healthcare costs increase and funding remains stagnant, provinces and territories may begin to mandate that individuals traveling province to province require private insurance; as if one was traveling to the United States or abroad.

This concept seems lucrative to Canadians, but is a real possibility, as we’re already seeing manifestations of this national inequality. Many families are talking their aging loved ones to different provinces, where they perceive they may obtain “better care”. Practicing medicine in Ottawa, we’re exposed to this daily; many patients from Quebec cross the river and visit Ottawa emergency departments, as the ER wait times are less than those in Quebec.

Politicians need to recognize that this is a very real issue, and need to develop a standardized approach to healthcare delivery in Canada. There needs to be accountability from all levels of government, appropriate transfer funding models, and the promotion of innovation so that various healthcare bodies are not reproducing already successful innovations.

We need to restructure how we deliver healthcare services; because if we don’t start talking about it, it will be forced on us. There is time for us to have a discussion, and time for us to fix the system – but that window is slowly closing upon us.

Perhaps it has come time to reevaluate the Canada Health Act, as it seems to have become woefully inadequate for Healthcare delivery in Canada in the 21st century.

Canadians are proud of universal healthcare and having a publicly funded system, but if we do not safeguard our healthcare system we’re in big trouble. If the federal government doesn’t analyze these issues, we may be forced to transition to a private system. Consider that 5% of the population utilizes 60% of healthcare resources. A significant common denominator amongst this population is that they are amongst a lower socioeconomic class, and poverty is growing in Canada at an alarming rate, further compounding this problem. Governments and healthcare systems have done a poor job thus far at addressing the issue of this vulnerable group. The healthcare system expends a significant proportion of resources on this population, rather than having preventative healthcare strategies in place, such as access to family physicians, and harm reduction strategies such as needle exchange programs.

Currently; the system is strained but surviving, however, we will one day hit a breaking point, and economic principles may force us towards increasing privatization. Take for example; most people currently wouldn’t want to spend $800 on a CT scan for themselves, but we will hit a point where the public sector is unable to deliver such services in a timely fashion. As a result, individuals will begin paying for these services, and the private sector will crop up once patients value their health and time over a particular dollar amount. We’re already seeing this issue on a micro level, with Canadians traveling down south for medical tests and procedures, and it is already occurring in British Columbia and Quebec.

This is by no means a pleasant or popular discussion, and one can appreciate why politicians are reluctant to bring it up. However, it is an important discussion because our system is strained – and fixing it stops at the top, with the structure and organization of healthcare in Canada. It is time for federal government to reevaluate the Canada Health act, and politicians need to take an active role in discussing healthcare for Canadians.

Dr. Shahbaz Syed is a 4th year Emergency Medicine resident at the University of Ottawa, undertaking a fellowship in digital scholarship, with a special interest in medical journalism.