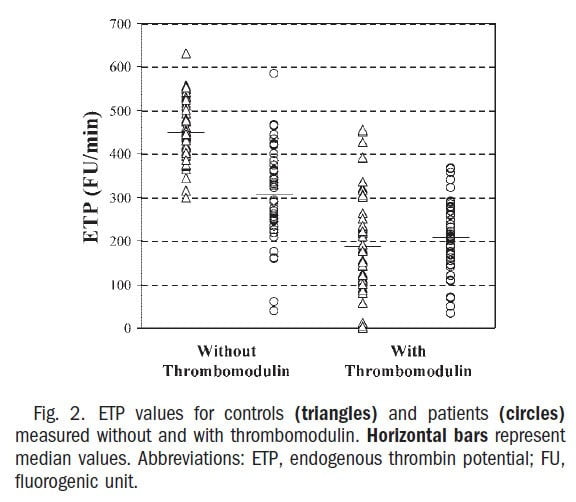 I was recently asked to give fresh frozen plasma to a patient with liver disease and an elevated INR before a therapeutic thoracentesis. He was otherwise healthy and had no history of bleeding diathesis. While I was asking for consent and explaining the risks and benefits of blood product transfusion, I began to wonder about the true benefits in his case. Knowing that liver failure leads to both pro and anti-coagulant deficiencies, I wondered: Is an elevated INR in an individual with hepatic disease really a good indicator of their coagulability?

Do patients with liver disease need FFP before procedures?

The coagulation cascade can be simplified into two competing forces: clot formation and clot breakdown. Within the micro-environment of a vessel wall tear, whichever force is largest will govern whether, and how quickly, a thrombus is generated. So, how does liver disease modify these forces? During my literature search I found a very good review article entitled “The prothrombin time test as a measure of bleeding risk and prognosis in liver disease” [1]. The following discussion owes much to this article.

The “INR” test is a measure, in vitro, of the time to coagulate (formation of a fibrin clot as detected optically) in a patient’s isolated sera that has been seeded with tissue factor. This mimics the process that happens in vivo when a vessel wall is damaged, exposing this factor and setting off the coagulation cascade. However, time to coagulation calculated by an INR only reflects how long it takes for the clot to reach a certain size, and not the speed of its subsequent growth (which is also physiologically important for coagulation). This is where anticoagulant factors (which may also be absent in a patient with liver failure), such as protein C, play a role. They put the ‘breaks’ on clot enlargement after it is formed so their deficiency will not necessarily be reflected with an elevated aPTT or INR.

This problem does not influence the measurement of coagulability in otherwise healthy patients on warfarin (e.g. those with atrial fibrillation). In this setting, coagulability is dependent specifically on the vitamin-K dependant proteins and INR does a good job of indicating the extent of anticoagulation. While vitamin-K factors may also be low in a patient with liver failure, so are other proteins (e.g. protein C) which makes INR a poor reflection of in vivo coagulation. Effectively, both coagulation and anticoagulation can be impaired in liver failure. 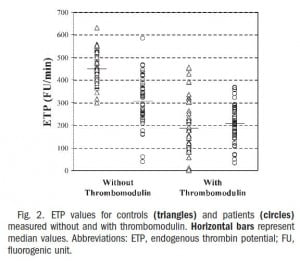 Effect of thrombomodulin on clotting in liver cirrhosis [2]

An article entitled “Evidence of Normal Thrombin Generation in Cirrhosis Despite Abnormal Conventional Coagulation Tests” [2] addresses the question of how to measure coagulability in these individuals. It found that thrombin generation was not statistically different between those with cirrhosis and healthy controls once thrombomodulin, a factor essential for protein C function, was added to the assay. Thrombomodulin is found in vivo attached to the endothelium so it is not present in vitro unless added. As you can see from the figure, without thrombomoduliun, cirrhotics (the circles) had much less thrombin generation (ie. clotting activity), whereas when it was added, there was no difference between those with liver disease and healthy controls.

That being the case, coagulability (as measured by thrombin generation) in an in vitro setting that more resembles the in vivo environment (by taking into account protein C) is no different in those with cirrhosis than those without, despite elevated INRs in the former. In addition, numerous observation studies exist that show little relation between INR and bleeding risk in those with liver disease. For example, one study [3] found no relation between INR and severity of bleeding post liver biopsy, a review article [4] of the surgical management of cirrhotic patients found that fresh frozen plasma has not yet been shown to be effective, and another study [5] showed that the addition of fresh frozen plasma to the sera of cirrhotic patients decreased the INR but did not change thrombin generation.

In a patient with cirrhosis, INR is a poor predictor of bleeding risk and the common practice of transfusing fresh frozen plasma before surgery or procedures in otherwise stable patients with liver disease and an elevated INR is questionable.

Dr. de Wit (@kerstinhogg) is an Assistant Professor in the Department of Medicine at McMaster University.  She is cross-appointed between the divisions of Emergency Medicine and Thrombosis. She has reviewed the above piece, and has also written the following.

Bleeding can occur in patients with liver disease for a variety of reasons. The liver synthesis of Factors factors II, V, VI, IX, X, XI, XIII, Protein S, Protein C and fibrinogen can be reduced. Malnutrition is common and vitamin K deficiency results in a further reduction of factors II, VII, IX, X, Protein C and Protein S. Cirrhosis is commonly associated with thrombocytopenia. Furthermore, cirrhotic patients are at risk of bleeding secondary to portal hypertension, in places such as the esophagus where tamponade is challenging to achieve. Falls are common in alcoholic patients and the relative fragility of their tissues is seen in the high prevalence of subdural hematoma in those with minor head injury.

Clotting is not infrequent in cirrhotic patients, with many patients diagnosed with portal vein thrombosis. This venous thrombosis is likely to result from venous stasis in the portal vein, accompanied by reduced presence of our natural anticoagulants Protein C and Protein S.

It is difficult to know whether the bleeding propensity is ‘measureable’, for the reasons stated in this article. However, we should be aware that regardless of coagulation test results, all cirrhotic patients have a high risk of bleeding.

What can we do to mitigate risk of bleeding and improve outcomes in those who present with bleeding?

Of course, the ultimate treatment is hemostasis.

This post was peer-reviewed by Dr. Brent Thoma (@Brent_Thoma)

Nephrology Fellow at the University of Saskatchewan and Creator of the LR Database website and Dx Logic app.