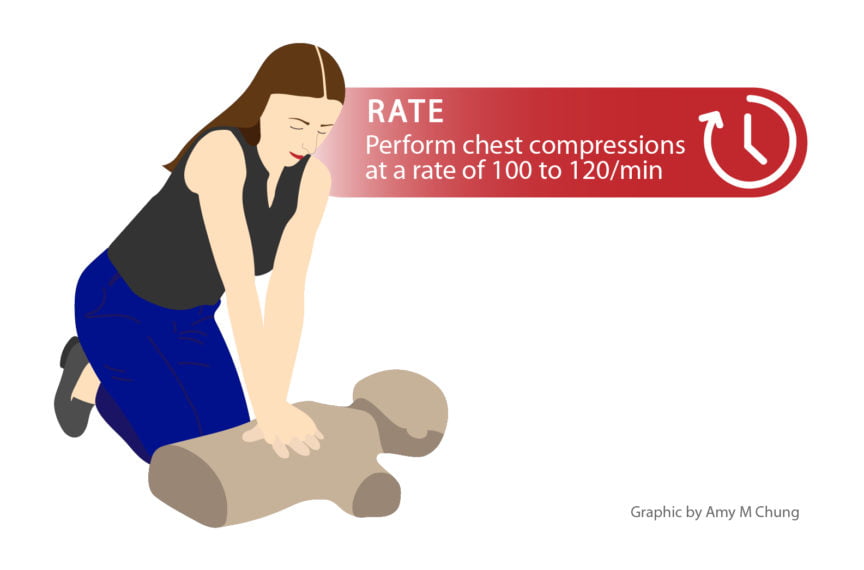 Editor’s note: This post marks the first in a series of posts outlining the evidence surrounding various aspects of CPR by Dr. Stu Netherton Follow along over the next 5 weeks as he covers Rate of Compression, Depth of Compression, Chest Wall Recoil, Minimizing Interruptions, and Avoiding Excessive Ventilation.

As early as 1892 Dr. Friedrich Maass, a resident at that time, documented that chest compressions at a rate of 120 successfully resulted in palpable carotid pulses and successful resuscitation of two pediatric patients.1 CPR recommendations for the compression rate have changed along with guidance from resuscitation literature. While the first set of guidelines suggested a rate of 60 compressions per minute, this has been revised multiple times, leading us to the most recent guideline published in 2015:

“In adult victims of cardiac arrest, it is reasonable for rescuers to perform chest compressions at a rate of 100 to 120/min”

This was updated from the 2010 guidelines which read: “It is reasonable for lay rescuers and health care providers to perform chest compressions at a rate of at least 100/min”

In animal models, higher rates of compressions have been shown to improve 24hr survival2 and increase total cardiac output while maintaining adequate coronary blood flow.3  These same hemodynamic effects are seen in humans during CPR. A rate of 120 compressions per minute significantly elevated aortic peak pressure and the coronary perfusion gradient during cardiac arrest.4

Performing a double-blinded, randomized clinical trial on cardiac arrest victims to identify the ideal rate of compressions would be extremely difficult to accomplish. To guide cardiac arrest resuscitation management we rely on animal data (as above), manikin studies and retrospective patient data. In a recent manikin model, a rate of 120 was associated with the highest number of compressions that fulfilled criteria for high-quality CPR. 5 Using end-tidal CO2 as a surrogate marker, since it correlates with cardiac output6, a compression rate of 120 in humans provides significantly higher end-tidal CO2 compared to a compression rate of 80.7 Early retrospective studies on in-hospital cardiac arrests showed higher compression rates improved chances of ROSC, even though the average compression rate was below the recommendation at that time.8 More recently, rates of between 100-120 have been shown to lead to the greatest chance of survival to discharge,9 while chest compression rates were shown to be have a curvilinear association with ROSC, peaking at approx. 125 compressions per minute.10

But isn’t faster always better? Animal models show cardiac output increases with rates of compression up to 1503 and there is evidence to suggest rates of 120-140 lead to the greatest chance of return of spontaneous circulation (ROSC) for in-hospital cardiac arrest patients.11 So why add in an upper limit? Remember that successful CPR is not one component alone, but all working together, and hence one can affect another. Chest recoil is increasingly incomplete at rates above 1205 and there is an inverse relationship between rate and depth of compression.12 By not allowing for full chest recoil or having shallow compressions, we lessen the chance of successful CPR. In fact, the European Resuscitation Council included an upper limit of 120 compression per minute in their 2010 guidelines.13

Guiding our rate to between 100 and 120 compressions per minute will maximize cardiac output and provide adequate coronary perfusion pressure while still allowing for full chest recoil and compressions of appropriate depth. Whether you count two compressions per second, sing “Staying Alive” by the Bee-Gees (to yourself), or practice during SIM sessions, getting that proper feel for a compressions rate of between 100 and 120 takes practice. If you’re involved with the resuscitation and you see someone going too fast, coach them to slow down; if you see someone looking fatigued and going too slow, perhaps switch out providers.

Rate is critical but only when one understands that many of the CPR quality metrics have significant relationships. The faster you go the more shallow you often compress and hence lose the benefit of adequate depth of compression. So the essential component of rate is to stay in the sweet spot of 100-120 to maximize the impact of other critical CPR quality metrics.

Sheldon Cheskes, MD CCFP(EM) FCFP
Dr. Sheldon Cheskes is the Medical Director at the Regions of Halton and Peel, Sunnybrook Centre for Prehospital Medicine. He is an Associate Professor with the Department of Family and Community Medicine, Division of Emergency Medicine at the University of Toronto. Dr. Cheskes is recognized as an authority in the area of CPR quality. He has published extensively in the area of prehospital management and cardiac arrest resuscitation.
(Visited 4,464 times, 1 visits today)