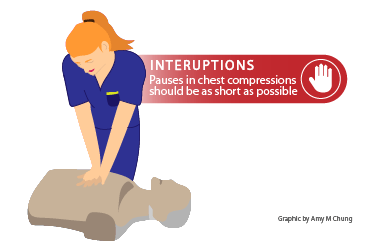 Editor’s note: This post marks the fourth in a series of posts outlining the evidence surrounding various aspects of CPR by Dr. Stu Netherton. Follow along as he covers Rate of Compression, Depth of Compression, Chest Wall Recoil, Minimizing Interruptions, and Avoiding Excessive Ventilation.

As providers we understand that the reason to perform chest compressions to artificially make the heart beat, delivering oxygen to and removing wastes from tissues. So it makes sense that the more time we are providing appropriate compressions, the more oxygen delivered to tissues in need. The updated 2015 guidelines remind us of this:

“In adult cardiac arrest, total preshock and postshock pauses in chest compressions should be as short as possible.”

While this wasn’t forgotten about in the 2010 guidelines – “Rescuers should attempt to minimize the frequency and duration of interruptions in compressions to maximize the number of compressions delivered per minute” – the recent guidelines are more specific about where the natural pauses in compressions are – the time around delivering a shock – and emphasize they need to be as short as possible.

Oxygen and substrate delivery to vital tissues is crucial to successful CPR, and thus adequate blood flow must be attained through chest compressions. ROSC is dependent on adequate myocardial oxygen delivery and blood flow during CPR,1,2 both of which are dependent on the coronary perfusion pressure (CPP).Maximal CPP is thus the physiologic goal of CPR, and this is maintained with maximally effective, uninterrupted chest compression. Interruptions in chest compressions have traditionally occurred during ventilation, pad placement, during pulse and rhythm checks and in the perishock phase.

The percentage of time a rescue team spends providing compressions is called the chest compression fraction (CCF). While the optimal goal of CCF hasn’t been identified, it makes intuitive sense that higher is better. Studies have identified a relationship between higher CCF and increased likelihood of survival of patients with shockable rhythms, and ROSC in patients with non-shockable rhythms. 3,4A target of 80% or greater is generally considered the CCF goal, which has been demonstrated to be an achievable one in a variety of settings.5

The best way to minimize the perishock pause is through teamwork, communication and coordination. Ensure there is a line of people ready to perform compressions, and be clear when they should switch out. Charge the defibrillator before compressions stop and then time pulse and rhythm checks (with or without defibrillation as indicated) with CPR provider changes.

Compression pauses kill people!! For each pause, there is a subsequent decrease in cerebral perfusion pressure. Interventions such as intubation, pulse checks and IV starts should occur through a team approach to resuscitation that minimizes interruptions in CPR. Interruptions around shock delivery are particularly harmful with the pre-shock pause being the most important. New automatic devices that charge in the background and provide rhythm analysis while CPR is ongoing will aid the lay provider in minimizing pre-shock pause. Minimizing time to interpret the rhythm via manual defibrillation can shorten pre-shock pause but when you aren’t sure, don’t waste time, get back on the chest and minimize chest compression interruptions.

Sheldon Cheskes, MD CCFP(EM) FCFP
Dr. Sheldon Cheskes is the Medical Director at the Regions of Halton and Peel, Sunnybrook Centre for Prehospital Medicine. He is an Associate Professor with the Department of Family and Community Medicine, Division of Emergency Medicine at the University of Toronto. Dr. Cheskes is recognized as an authority in the area of CPR quality. He has published extensively in the area of prehospital management and cardiac arrest resuscitation.
(Visited 6,970 times, 2 visits today)