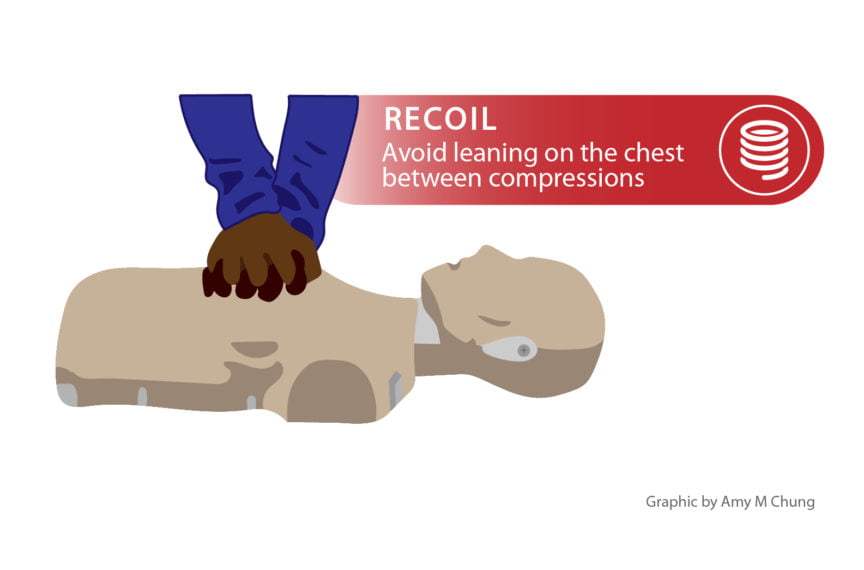 Editor’s note: This post marks the third in a series of posts outlining the evidence surrounding various aspects of CPR by Dr. Stu Netherton. Follow along as he covers Rate of Compression, Depth of Compression, Chest Wall Recoil, Minimizing Interruptions, and Avoiding Excessive Ventilation.

While the wording has changed, the bottom line is not significantly different from the 2010 guidelines:
“Rescuers should allow complete recoil of the chest after each compression, to allow the heart to fill completely before the next compression.” The updated guidelines place more emphasis on the action provided by the person performing the CPR, i.e. to avoid leaning. Not leaning on the chest between compressions will in turn allow for complete recoil of the chest during CPR.

The proper study of chest wall recoil and outcomes hasn’t been done in humans. Again, relying on animal studies to help us maximize CPR effectiveness. Using animal studies, retrospective pediatric arrest data and non-arrest pediatric studies have helped to provide evidence guiding this practice. A study of porcine CPR showed that incomplete chest recoil, set at 25% in this study, lead to measurable decreases in mean arterial pressure, coronary perfusion pressure, cerebral perfusion pressure all the while impeding venous return to the heart.1 In another animal model, as little as a 10% lean during CPR, which equated to 1.6kg of pressure in this study, lead to decreased coronary perfusion pressure, decreased left ventricle myocardial blood flow and decreased cardiac index.2 In a study of in hospital pediatric resuscitation, it was shown that 50% of the time, the person performing CPR was leaning with a force greater than 2.5kg.3 Adult in-hospital arrests are no different. One study demonstrated that 91% of resuscitation attempts involved some element of leaning.4

CPR is a lot of work, and doing it properly is even requires even more exertion. While studies relating complete chest recoil and patient outcomes do not exist, the afore mentioned animal and pediatric studies provide evidence as to the physiological sequelae of incomplete chest recoil, help to alert us to its high prevalence during resuscitations, and play a major role in guiding the 2015 recommendations.

Full compression release is required to maximize venous return to the heart during CPR. Increasing release velocity over 400 mm/sec has been associated with improved outcomes in 2 different observational studies. 6,7 To ensure adequate release and minimize leaning, requires devices which provide real time feedback on this critical metric. If high quality CPR is achieved, devices (impedance threshold device) may further improve venous return if applied early during a resuscitation.

Sheldon Cheskes, MD CCFP(EM) FCFP
Dr. Sheldon Cheskes is the Medical Director at the Regions of Halton and Peel, Sunnybrook Centre for Prehospital Medicine. He is an Associate Professor with the Department of Family and Community Medicine, Division of Emergency Medicine at the University of Toronto. Dr. Cheskes is recognized as an authority in the area of CPR quality. He has published extensively in the area of prehospital management and cardiac arrest resuscitation.
(Visited 2,526 times, 3 visits today)