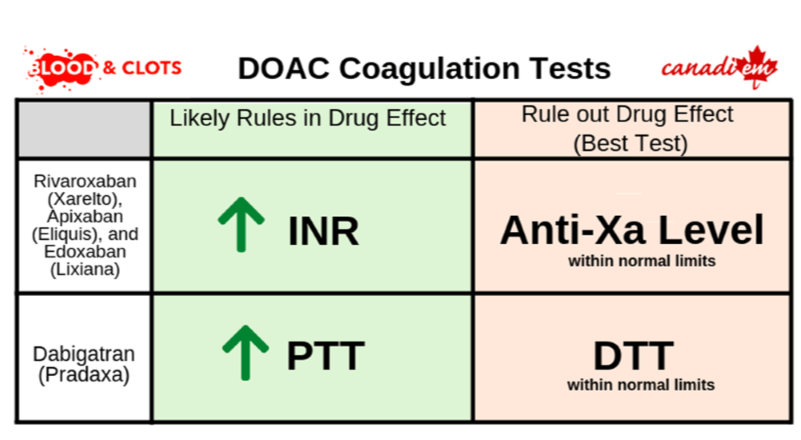 Dolores Landingham is a 68 year-old woman on apixaban 5mg BID to treat an unprovoked pulmonary embolism that occurred 3 months age. She is brought to your emergency department after slipping on the ice, falling, and injuring her left hip. She is diagnosed with a non-displaced femoral neck fracture requiring open reduction internal fixation. Her aPTT is 32 seconds (normal 30-40 seconds) and INR is 1.2. Do a normal INR and PTT sufficiently rule out anticoagulation and is she safe for an operation? Or is any additional testing required?

Testing for DOAC levels is generally not required.

The DOACs have predictable pharmacokinetics, and if the time of the last ingestion is known then testing for DOAC levels is generally not required. The number of patients on DOACs is steadily rising, and it’s important to understand the standard perioperative and periprocedural management of the DOACs. In general there should be minimal (12-25%)  anticoagulant effect after 3-4 half-lives and a clinically insignificant (3-6%) anticoagulant effect after 4-5 half lives. At this concentration even neuraxial procedures can be performed safely. The half-life of apixaban, rivaroxaban, and edoxaban can be reasonably estimated at 12 hours, so most of these drugs will have their anticoagulant effect wear off in 48 hours. The half-life of dabigatran is longer, particularly in patients with renal dysfunction, and longer stoppages are required prior to safely performing procedures.

A pharmacokinetic approach for stopping DOACs prior to planned procedures is available through the thrombosis Canada website, and recent prospective trials have confirmed the safety of this approach.

Unfortunately, Mrs. Landingham is having a difficult time remembering when she last took her pills, including her apixaban. You’re uncertain whether her relatively normal coagulation studies are helpful in ruling out a clinically significant anticoagulant effect, and wonder whether any lab tests can be performed to help determine if an apixaban effect is still present in this patient who would benefit from an urgent surgery.

When to use lab testing for DOACS

Some specific situations may necessitate a more accurate estimation of current anticoagulation effect​1​. In particular, laboratory monitoring of DOACs may be useful for:

In these situations, measurement of DOAC levels should be tailored to the specific DOAC being used.

Measuring the effect of anti-Xa inhibitors​2,3​

Rivaroxaban prolongs PT, which is used to calculate the INR, in a concentration-dependent manner. The PT (particularly with a sensitive reagent) can be used as a screening test for urgent assessment of rivaroxaban exposure. In general, rivaroxaban prolongs the INR to 1.4-1.6, but this can vary widely with different PT reagents. A normal INR does not rule out a clinically significant anticoagulation effect due to rivaroxaban.

Routine coagulation tests (INR and PTT) show lower sensitivity to the effect of apixaban than rivaroxaban. The PT cannot be used in the same manner to screen for apixaban effect, and a fully anticoagulated patient may have normal INR and PTT.

Like apixaban, the effect of edoxaban on routine coagulation tests (INR and PTT) is modest and unreliable for assessing the current anticoagulation effect.

Measuring the effect of Dabigatran

Dabigatran is a direct thrombin inhibitor and frequently prolongs the aPTT. The standard thrombin time (TT) test is highly sensitive to dabigatran.  Having a normal thrombin time can be used to rule out a clinically significant dabigatran effect.

When abnormal, the aPTT and TT are unable to quantify the dabigatran effect. For that purpose a dilute thrombin time (dTT) can be obtained. Discussion with your local hematologist or anticoagulation specialist is recommended when ordering and interpreting tests for DOAC activity as these results can vary significantly based on the assay being used.

Use of functional hemostatic studies (TEG, ROTEM) for DOACs

DOACs affect functional whole blood point-of-care coagulation tests such as ROTEM, as they cause a dose-dependent increase in ROTEM clotting times (CTs)​4​.  However,ROTEM testing has not been widely studied for this use, and should not currently be used to rule in/out the presence of therapeutic levels of DOACs. Apixaban has a weak effect on ROTEM clotting times, even at therapeutic concentrations.

Mrs. Landingham is uncertain when she last took her apixaban, and routine coagulation tests (INR, PTT) can not to rule out a clinically significant anticoagulant effect. If an anticoagulant effect can be ruled out, then she may be eligible for surgery sooner, which means less time immobilized in bed! She is also not actively bleeding, and there is adequate time to wait for an apixaban specific anti-Xa level.

Your lab returns an apixaban level of 30ng/mL. You discuss the result with the hematologist on call who advises that it is safe to proceed to surgery with this low blood concentration of apixaban. They also note that this result makes appropriate use and twice daily dosing unlikely. Noting the patient’s uncertainty about her medications, you leave an order for pharmacy to review and consider blister packs or other methods of improving medication adherence be considered prior to discharge.

This post was reviewed by Brent Thoma, Mark Woodcroft and copyedited by Rebecca Dang.

Matthew Nicholson is a clinical hematologist at the University of Saskatchewan. He's passionate about medical education, cycling, music, and he has been known to get lost in a good book.

Dr. Andrew Shih works as a Transfusion Medicine specialist at Vancouver Coastal Health Authority. His interests include education regarding the safety and appropriate utilization of blood products and advance blood transfusion as a personalized medical therapeutic intervention.