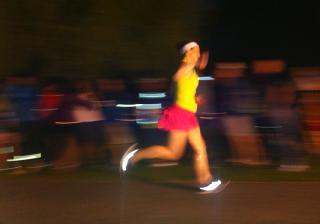 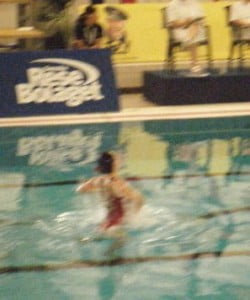 My world before medical school included a lot of time spent in pools, and several blurry photos.

When I was applying to medical school, I got the sense that the more non-academic activities I participated in, the more well-rounded I was, the greater the chances of my success. It wasn’t a stretch for me. Among other activities, I was heavily involved in synchronised swimming and had been for many years; I was training for an international competition and varsity nationals the year I applied. If I wasn’t in the pool, I was stretching, cross-training, or half-heartedly chugging milkshakes to hold down enough calories to maintain my busy athletic schedule.

When I started medical school, much changed.

Medicine demanded most of my time, and my habit of drinking milkshakes was no longer adaptive. I was still swimming, but now only a handful of hours a week – less than a quarter of the time I had previously spent in the pool, and even less still of the total time I had spent training in the year prior. I gained forty pounds, was full of unfocussed energy no longer spent at the pool and in the gym, and was deeply unhappy. No longer spending all my time active, I now was able to acknowledge that I had a serious problem with my shoulders, and I had shoulder surgery at the end of my first year of medical school.

I spent the better part of six miserable months in a shoulder immobiliser – three months prior to surgery because I could not seem to keep my left shoulder from dislocating, and three months after surgery during which I was scarcely allowed to use my left arm for anything lest I disrupt the delicate repair my surgeon had wrought. Now with no physical outlet, I began to feel a little stir crazy. 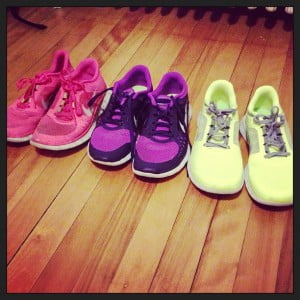 When you run lots, you get to buy lots of shoes.

When I was finally given the okay to re-start physical activity, it was with the understanding that I couldn’t swim for at least a few months. I needed a new outlet, and running was the safest activity I could take up. I had tried running several years previous and hated it, but now I couldn’t get enough. Before I had even run my first 5k, my best friend asked me if I’d like to run a half marathon with her. Within 13 months of my first 5k, I had completed my first full marathon. Eventually, I was able to get back in the water with my university synchro team, but I also kept running. In fact, between December 3rd of my third year of medical school and December 2nd of my fourth year, I was physically active for 365 consecutive days (you can read all about that journey at http://ksnsweat.blogspot.ca/).

Now, I’m often teased when I leave a shift because I usually leave in running tights or a running skirt, on my way to the gym or out to pound the pavement before I head home, even if my shift ends at 2 a.m. I usually work out about 5 times each week, sometimes more or less depending on my schedule. Running (and working out in general) has become an essential part of my well being as a resident. Here’s why:

There’s nothing worse than not being able to sleep after a long shift or a night on call. I’m not much of a worrier, and I don’t spend much time ruminating, but I’m often so keyed up after work that it’s hard to relax and let myself drift off. If I don’t work out, I spend time pacing around my house, cleaning, cooking, and generally missing out on good sleep time. When I work out, I come home exhausted and really benefit from the good sleep I need.

2) It focuses my energy.

At the end of a particularly long shift where I had stayed late, a patient’s father asked me if I was always so energetic at the start of a shift. I couldn’t help laughing. In all honesty, I always feel a little tired, but I’m also always going hard, talking fast, and generally making myself a nuisance to all the calm people in my life. If I don’t spend some energy on working out almost every day, I start to feel unfocussed. I jump from task to task without finishing anything, and I start to use some of my energy on worrying about things that wouldn’t normally trouble me. Working out helps me dissipate some of that energy, and focus the rest on doing my best work for patients and colleagues.

I’ve now lost 30 of the 40 pounds I gained during medical school, and I feel so much better. I’m sick less often and happier. I have better cardiorespiratory capacity, and I am stronger. I like the thought that my inner machinery is working away as it should, with cholesterol and glucose levels well-regulated. Enough said.

4) It gives me a sense of control and mastery.

Sometimes I leave the hospital after a shift feeling absolutely useless. Maybe I failed to accurately diagnose a patient with an occult infection. Maybe I didn’t have the answers when my attending pimped me mercilessly. Maybe I just had patients I couldn’t do much for. It’s easy to feel stupid, useless, and just generally out of control, but I can go out for a run and sprint just a little bit father than before, or just a little bit faster, and be reminded that I can improve, work harder, do well. I think we each need something in life that we feel truly good at, and even though I am not a fast runner, running gives me that. I know I can run farther than most people I know, and under more challenging circumstances (Icy streets of Kingston in a blizzard? Sure thing! 42 k in hilly interior British Columbia in August? Bring it on!). At the end of the day that sense of mastery makes me feel good.

5) It reminds me that there is life beyond medicine.

When we are fully engaged in medicine, it can be easy to forget that there is life outside the hospital. Running reminds me that I am more than just a resident. 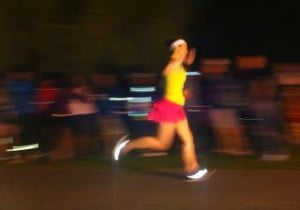 There’s nothing quite like the feeling of running it in at the end of a long race.

Reviewing with the staff: By @TChanMD (the ultimate non-runner)

I must admit, if there were an antithesis to a runner, it would be me. Maybe it’s because of my flat feet, or maybe my mild exercise-induced asthma, but I just plain don’t like it.

That said, physical activity is probably something that all of us need to find ways to incorporate into our lives. And something we should probably do a better job at as people…but also as physicians.

This series is intended to remind healthcare providers there is life outside medicine, so I would like to take this time to remind us all (even the emergency care providers) that it is possible to find time to take care of ourselves.

But also to consider reminding our patients about this too.

The following video by Dr. Mike Evans (@docmikeevans) out of the University of Toronto & St. Michael’s Hospital in Toronto, is a great video to watch from time to time to remind ourselves (and our patients) about the great benefits of just 30 minutes of WALKING per day.

Remember, you can’t take care of others people if you don’t find time to take care of yourself. (@sluckettg pipes in to say ‘In the wise words of your flight attendant, make sure your own mask is secured before you help the person next to you’!) You deserve as much attention as any of your patients do. Spend some time on yourself and on your own physical wellbeing.