In this 155th episode of Crackcast is focused on toxic alcohols. There will be a special emphasis on ethanol, ethylene glycol and isopropyl alcohol.

Today we’ll discuss the two and one so-so toxic alcohol: focusing on methanol, ethylene glycol (EG), and isopropyl alcohol (isopropanol). For an awesome primer, check out FOAMCAST & CORE-EM. Please see Rosen’s Fig. 141.1 for the metabolism of alcohols in the body.

In the end, this chapter is all about the following table:

We will be going over it specifically. The “KULT” mnemonic is a good one to think back on, especially when you’re drafting a list of DO-NOT-MISS causes of a double gap! 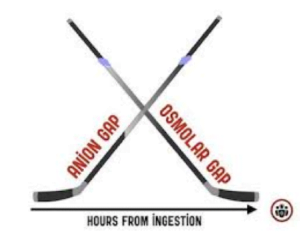 [1] What is the normal anion gap? What are causes of an increased anion gap? Approx 8-12, depending on your lab.

Ranges from 8-12 depending on lab.

NOTE***: A normal AG does not r/o toxic alcohol ingestion as the AG may be falsely elevated secondary to ethanol/lithium/bromide congestions

[3] How do you correct the osmolar gap when there is EtOH present?

[4] Describe the metabolism of Methanol, and what is the primary toxin?

[5] What are the two main complication of severe methanol poisoning?

Note*** After latency period of 1-72hrs, can see massive UGIB from hemorrhagic gastritis***

[6] Describe the metabolism of Ethylene Glycol.

[7] What are the primary 3 toxic effects of Ethylene Glycol?

[8] What are the 4 stages of Ethylene Glycol toxicity?

[10] Describe the 3 goals of therapy in toxic alcohol poisoning

Don’t forget that good supportive care is essential as well: correct hypoglycemia, hypokalemia, hypomagnesemia (high risk for arrhythmias due to long QT), and anything else that’s abnormal!

Why is dialysis preferred for methanol poisoning?

[14] What cofactors are used in the metabolism of toxic alcohols? (the adjunctive treatments for ethylene glycol and methanol toxicity?)

[15] What is the clinical presentation of isopropyl alcohol toxicity?

Much more inebriating than ETOH.

[16] What is the metabolism and cause of morbidity in isopropyl alcohol toxicity?

Please see Rosen’s Fig. 141.1 for the metabolism of alcohols in the body, including isopropyl alcohol.

If the patient is persistently hypotensive, despite standard resuscitative measures, initiate HD. ADH blockade with fomepizole or ethanol is not indicated because this will only prolong the hypotensive and CNS depressant effects of IPA.

[1] What things can cause a “double gap”

Note: these are substances that cause both an osmolar gap and an AGMA

[2] What are the toxic metabolites & effect  of ethylene glycol methanol & isopropyl? (review)

[3] What is gasping baby syndrome?

“Benzyl alcohol poisoning can cause the gasping syndrome in neonates. The infants had a typical course of gradual neurologic deterioration, severe metabolic acidosis, the striking onset of gasping respirations, thrombocytopenia, hepatic and renal failure, hypotension, cardiovascular collapse and death.”

[4] How does propylene glycol toxicity present?

[6] What is the pathognomonic ocular symptom of methanol ingestion?

This post was uploaded and copyedited by Kevin Lam (@KevinHLam)