This episode of CRACKCast covers Rosen’s 9th Edition Chapter 146, Antidepressants. Continuing the section on toxicology, antidepressants make up one of the most commonly prescribed medications in the general population. The use and misuse of antidepressants can have serious consequences and having a high suspicion of overdose in suicidal patients can lead to timely antidote therapy.

I like the little trip down memory lane here! Fun medical history tidbit – the class of antidepressants we know as monoamine oxidase inhibitors (MAOI) came from the anecdotal findings that patients treated for TB with isoniazid and iproniazid (which inhibit MAO) had improved mood symptoms. Therefore, there was the formation of the >60 year old theory that depression stems from an imbalance of monoamine neurotransmitters (eg dopamine, noradrenaline and serotonin).

We NEED TO KNOW THESE DRUGS.

Another key fundamental understanding is how and where these drugs work: 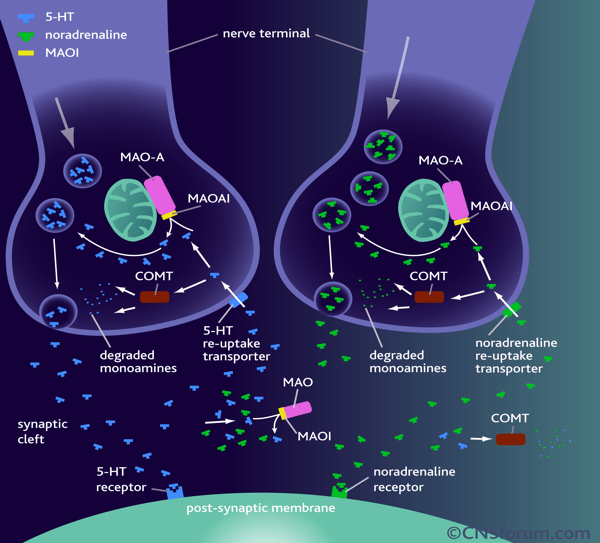 MAOIs were the first!

The old school first generation MAOIs are non-selective and IRREVERSIBLE

“Drugs that selectively inhibit MAO-B disproportionately increase dopamine concentrations in the striatum. Selegiline is an irreversible MAO-B inhibitor used in the treatment of Parkinson’s disease. Importantly, the selectivity for MAO-B is only present at low doses. Rasagiline is also an irreversible inhibitor of MAO-B and has similar clinical efficacy with selegiline. Furthermore, unlike selegiline, which is metabolized to l-methamphetamine, rasagiline is not metabolized to an amphetamine derivative.”

[3] Describe the management of TCA toxicity

If less than 2 hrs from known ingestion

[4] What are the diagnostic criteria for Serotonin Syndrome?

“The descending ladder of hyper-reflexia”

[5] How can you discern between NMS and Serotonin Syndrome?

Both look the same = FARM

However, the major differentiating features:

[6] What are the common meds causing Serotonin Syndrome?

Rare: Linezolid & Methylene Blue!!! When mixed with SSRI use

[7] Describe the management of Serotonin Syndrome

[8] What is the primary risk of toxicity in Bupropion?

[9] What are the 3 mechanisms by which MAOI toxicity can occur?  And what is the clinical syndrome?

Overdose
Show notes: What is a Tyramine Reaction

This occurs after an ingestion of tyramine containing foods such as cheese and beer. It precipitates am hypertensive crisis. Patients may complain of headache, sweating, agitation and chest pain. Complications include an intracranial bleed, rhabdomyolysis, acute renal failure and DIC. It should be managed as per the resuscitation section to lower BP and alleviate anxiety and tachycardia.

[11] Describe the management of MAOI toxicity.

Note: Juicy Dr. JG Pearl: Generally, treatment is supportive/the same as for sympathomimetic overdose/ serotonin syndrome, only thing to be aware of is that catecholamine burnout is very common… so may actually require pressor support later on.

[12] What is discontinuation syndrome and how is it managed?

***Basically, all of the ANTI- anything drugs***

[1] What are the indications for Bicarb in TCA toxicity?

When do you switch to Hypertonic?

This episode was uploaded and copyedited by Riley Golby (@RileyJGolby)