This episode of CRACKCast covers Rosen’s Chapter 129, Skin Infections. These are common and rarely life threatening, but careful consideration should be given for those who may benefit from admission over outpatient treatment. This is a big episode covering the bugs, presentations, and useful tips when treating these infections in the ED.

Skin infections are common and are rarely life–threatening. Deadly necrotizing skin and soft tissue infections are rare, and there is insufficient evidence to motivate screening by laboratory tests.

The skin is the largest organ in the body and accounts for about 15% of total body weight. It has three layers, the hypodermis, dermis, and epidermis. 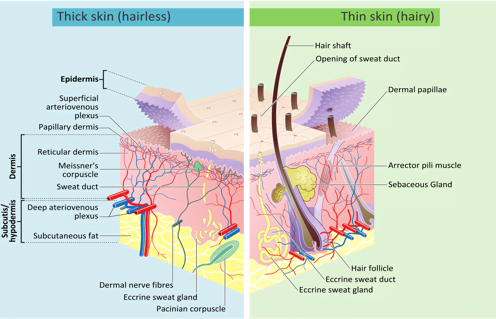 Let’s talk about some quick pathophysiology:

When it comes to the bedside, this is what we’re looking for to demonstrate that there could be a skin infection:

Here  are a few other findings to watch out for:

Here are a few “classic” stereotype, special circumstances to know about, because we won’t cover them in the episode:

Predisposing factors for development of cellulitis and/or skin abscess include:

Lymphatic compromise may occur following surgical procedures (such as saphenous venectomy or lymph node dissection) or in the setting of congenital abnormalities.

Cellulitis is an inflammatory condition of skin and subcutaneous tissue thought to be the result of bacterial infection. It may be purulent or non-purulent and may occur in the setting of wounds, foreign bodies, or impaired perfusion.

Inflammation near a joint:

Unless you have superpowers (in which case you should be a microbiologist) – we can’t really say for sure what infection is caused by what bug. But here are a few general observations according to Uptodate:

Definitely be aware that skin and soft tissue infections can be caused by weird bugs too (but thankfully rare). Less common causes of cellulitis include:

[5] Which patients with cellulitis should be admitted to hospital?

Hospitalization is generally required for:

When to start IV therapy? Tough, clinical decision. Here are a few principles from Uptodate:

Treatment with parenteral antibiotics is warranted in the following circumstances:

The decision to initiate parenteral therapy should be based on individual clinical circumstances such as severity of clinical presentation and patient comorbidities. As an example, the presence of an immunocompromising condition (such as neutropenia, recent organ transplant, advanced HIV infection, B cell or T cell deficiency, or use of immunosuppressive agents) should lower the threshold for parenteral therapy.

[6] Describe the pathophysiology of simple abscesses. How are they managed? Which patients require antibiotics?

Here’s the story of how Mr. Abscess came to existence:

Don’t know if it’s a cellulitis or abscess – the BEST way to figure that out – GRAB the ultrasound! http://sinaiem.us/tutorials/soft-tissue-abscess/

If there is an abscess, this pressure will make the pus within the tissue move around, which helps in diagnosing an abscess – We call it Pus-stalsis. – from:

Plus the bonus of using ultrasound is that you don’t cut into that pseudoaneurysm…..Vascular aneurysms and enlarged lymph nodes can be misdiagnosed as abscesses. Ultrasound examination can be helpful in this regard, and a color Doppler study should be used to investigate perivascular abscesses. When there is doubt, needle aspiration should be used to confirm the presence of pus and absence of blood.

The treatment of abscess is surgical, and antibiotics are usually not indicated.

***Bartholin’s cyst abscess is caused by an obstructed Bartholin duct. Bartholin’s gland is located at the upper part of the lower third of the labium majora, and its duct opens onto the mucosa in this area medially but externally to the labium minora. Bacteria cultured are usually a mixture of aerobic and anaerobic flora from the vagina. Chlamydia trachomatis or Neisseria gonorrhoeae is isolated approximately 10% of the time.

A pilonidal abscess is an abscess at the superior aspect of the gluteal cleft between the buttocks. Also known as a pilonidal cyst, this abscess often recurs. Treatment is the same as for other cutaneous abscesses.

[8] What are the characteristics of a complex abscess? How does management differ?

These are complex wounds; some of which may have very few localised physical findings other than fever, leukocytosis and malaise. For example, the supralevator abscess or hepatic abscesses  – which require CT imaging with contrast. Most require surgery or an in depth hx and physical exam. They usually occur in patients with immunocompromised, diabetes, fistula-forming disease, peripheral vascular disease.

Complex abscesses that may benefit from culture include:

[9] What is the etiologic pathogen and management of each of the following:

Less sick than Staph or Strep TSS.  SSSS is treated with antibiotics active against S. aureus, including MRSA. Wound care and hydration are important. Caused by bacterial exotoxins known as superantigens because they cause a severe and pathologic host immune system response by stimulating T lymphocyte activation and functioning as mitogens in vitro.15 Systemic disease results from the immune system’s response to the toxin, but may be accompanied by or simply resemble bacteremic septic shock

Early SSSS may be difficult to differentiate from bullous impetigo. The lack of mucosal involvement helps differentiate SSSS from toxic epidermal necrolysis and Stevens-Johnson syndrome.

Other differential considerations include:

There continues to be some variation with the latest best practice on this issue. Rosen’s makes a general statement that simple, uncomplicated abscesses, after I+D, don’t require antibiotics.

Uptodate has this to say on the subject:

However, because many abscesses can be treated successfully with incision and drainage alone, expert opinion varies, and it is reasonable to forgo antibiotic therapy in otherwise healthy patients who have small abscesses (eg, <2 cm) and none of the above factors [36-38]. An antibiotic-sparing approach may be particularly compelling in patients who have multiple antibiotic allergies or intolerances.

The 2014 Infectious Diseases Society of America (IDSA) guidelines on the management of skin and soft tissue infections did not recommend routine antibiotic therapy for patients with mild skin abscesses in the absence of systemic infection, immunocompromising conditions, extremes of age, or multiple abscess, based on earlier data that suggested similar cure rates with incision and drainage alone [2]. However, subsequent large trials have indicated a benefit to antibiotic therapy, even in patients with small abscesses:

[11] What is the management of hidradenitis suppurativa?

Acne and hidradenitis suppurativa (acne inversa) result from the obstruction of sebaceous glands. Very painful! Usually occurring in women – unknown multifactorial cause. The typical onset is between puberty and 40 years. It is currently believed to be an acneiform disorder that begins with follicular occlusion, rather than infection of the sweat glands.

[12] What is the management of Bartholin’s cyst abscess?

[13] What are the diagnostic criteria for staph and strep TSS?

These are deadly toxin-mediated diseases!!!

The bacteria produce superantigens that are able to activate large numbers of T lymphocytes, resulting in the massive release of inflammatory mediators, including interleukins, tumor necrosis factors, and interferon.

Diagnostic criteria for streptococcal TSS include:

******These criteria were developed for epidemiologic purposes; failure to meet all criteria should not exclude the clinical diagnosis in suspicious cases. Staphylococcal TSS should be considered in any patient presenting with diffuse rash and hypotension. The diagnosis is made on the basis of the clinical presentation.

[15] What are the 2 types of necrotizing fasciitis? List 4 risk factors.

Clinical manifestations that suggest a necrotizing infection are :

Some patients appear well at presentation, and overlying skin may not be involved initially. Necrotizing fasciitis is an aggressive infection of subcutaneous tissues that spreads rapidly along fascial planes. In the operating room, the fasciae are inflamed, and tissue layers separate friably. It is caused by direct extension from a skin lesion in 80% of cases.

[16] Describe the management of necrotizing fasciitis.

Remember: Initial symptoms may be vague (eg, malaise, fever, body aches, nausea, diarrhea). There may initially be diffuse or fusiform swelling of an extremity, or it may appear to be a simple cellulitis or wound infection. Physical findings may not be obvious initially, and pain out of proportion to physical findings is a clue. Eventually, the skin turns violaceous or ecchymotic. Anesthesia may develop over the involved tissue because of infarction of superficial nerves. Subsequent inflammation may result in the classic sign of so-called wooden-hard subcutaneous tissues.

[17] What are the types of necrotizing myositis? Which patients are at risk? How are they treated?

Myonecrosis, myositis, and pyomyositis refer to infections of muscle, which are rare. They may result from local spread of an adjacent infection, penetrating trauma, vascular insufficiency, or hematogenous spread.

[18] What is pyomyositis? How does it differ from necrotizing myositis? What are common pathogens?

Pyomyositis is a deep abscess within striated muscle resulting from the hematogenous spread of bacteria in the setting of muscle injury. It is usually due to S. aureus, including CA-MRSA, and is more common in those who are immunocompromised. Mortality is less than 10%

[1] What are the potential complications of impetigo?

Impetigo rarely progresses to systemic illness. However, most cases of poststreptococcal glomerulonephritis are believed to be caused by impetigo and not pharyngitis. Its onset is usually 10 days after the onset of impetigo but may occur up to 5 weeks later. Another feared complication is acute rheumatic fever.  (according to uptodate)

[2] What is the eagle effect, and why is it important in toxic shock infections?

Basically, this is why we tell you to give clindamycin first and give it at large doses (900mg).

Normally, as antibiotic serum concentrations increase, so should its effectiveness. However, Penicillins are ineffective with such large microbial counts as seen in TSS. This is paradoxical as usually with increasing serum concentrations antimicrobials get MORE effective, but this is not the case AKA the eagle effect (first described by Dr Henry Eagle).

Also: Penicillins work on the cell wall, but if bacteria are not in the growth phase, its ineffective. Clindamycin works on the ribosomes, so gets around this issue.

[3] What is the difference b/n a furuncle and carbuncle?

Folliculitis usually resolves on its own but can be treated with warm compresses or topical mupirocin. Hot tub and fungal folliculitis usually don’t need specific topical therapy but exceptions occur in patients with immunocompromise.

A furuncle, or boil, is an infection of the hair follicle in which suppuration extends through the dermis into the subcutaneous tissue. Furuncles are painful and erythematous and often drain spontaneously.

A carbuncle comprises multiple furuncles with loculations and connecting sinuses, often with multiple sites of drainage. Systemic symptoms may occur. Carbuncles are more likely to occur on the back of the neck and are more prevalent in diabetics.

Furuncles and carbuncles are treated in the same manner as skin abscesses, primarily with incision and drainage. There is insufficient evidence to recommend for or against antibiotics, but

I suggest coverage for streptococci and MRSA when disease is severe. Small furuncles may be treated initially with a trial of warm compresses to promote drainage.

Let’s quickly recap this episode: because the textbook has an awesome flow chart; which if you burned into your head next time you saw a SSTI you’d be well set:

Indications for antibiotics in abscess