This episode of CRACKCast covers Rosen’s Chapter 91 for the 8th Edition (Chapter 81 9th Edition), Pancreas. This chapter covers the various pathologies, diagnoses and treatments of the Pancreas.

Pancreatitis is when the pancreas starts to auto-digest itself, usually because some spark (e.g. toxin) sets off an early activation of digestive enzymes. This causes a cascade of inflammation which leads to SIRS and possible intestinal bacterial translocation. This disease can have a mortality that ranges from 4% to 30% in severe cases!!!

The pancreas – divided into head, body and tail – lives in the retroperitoneum. The head abuts the duodenum, where is the tail crosses midline and abuts the spleen. 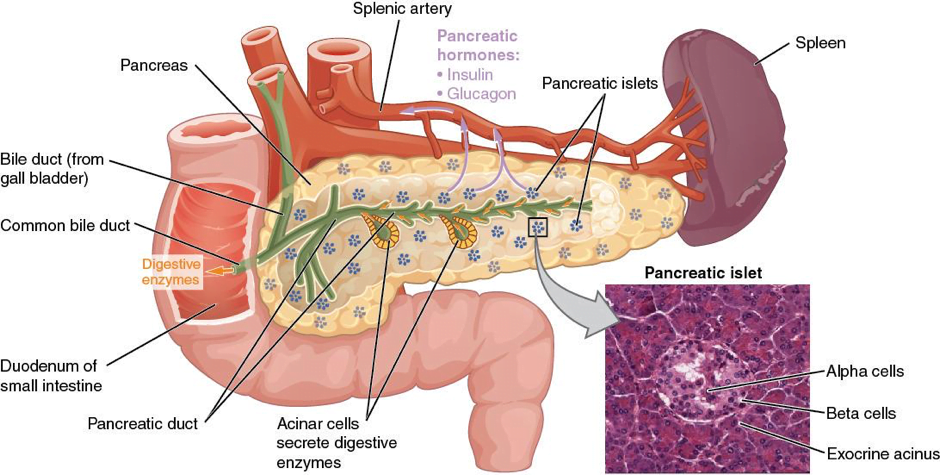 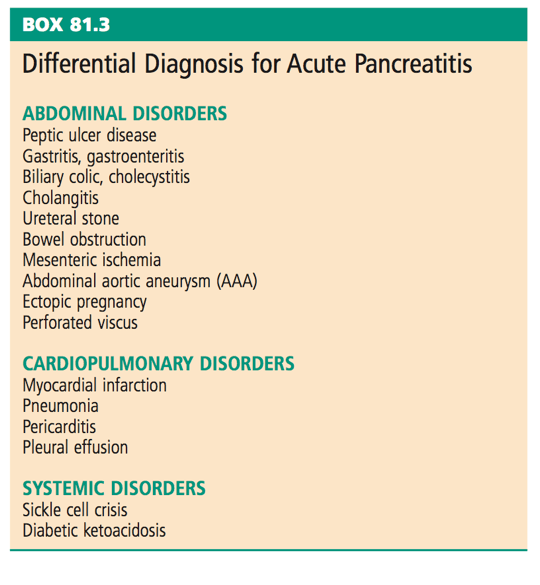 See table 81.1 – but in general these are the common adult causes: 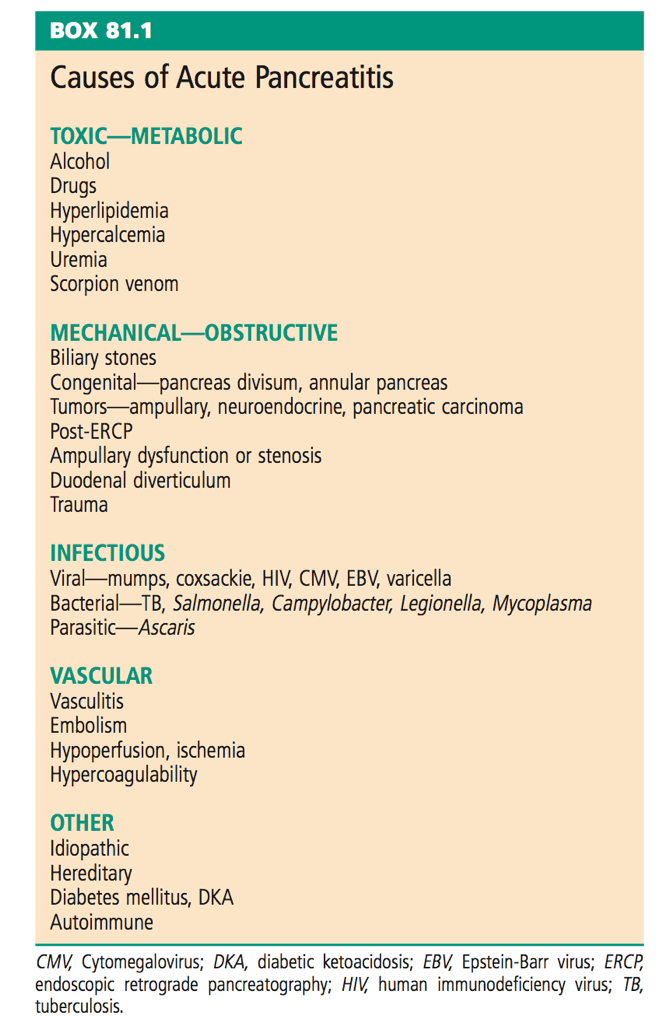 Again, this is mostly supportive!

Question 4) What are the early, late and chronic complications of pancreatitis?

Pancreatitis is usually classified as either: interstitial edematous (I.E.) VS. necrotizing. The interstitial type develops few local complications, and usually resolves in a week or so. The complications we’ll discuss now. This is revised from Box 81.2 (9th Ed.)

The clinical picture of pancreatitis is variable! And the level of pain doesn’t correlate with disease severity. To make the diagnosis of pancreatitis you need ⅔ of these:

These are a couple of scoring tools that exist, more for testing/research purposes than actual clinical application in the ER.

The Ranson’s criteria: see https://www.mdcalc.com/ransons-criteria-pancreatitis-mortality This is the most well known scoring tool. Unfortunately it uses 5 yes/no criteria at the admission mark, and 6 criteria evaluated at the 48 hr mark. Again, this makes it less useful in the ER! Let’s quickly run through it because your consultants may ask you about it… 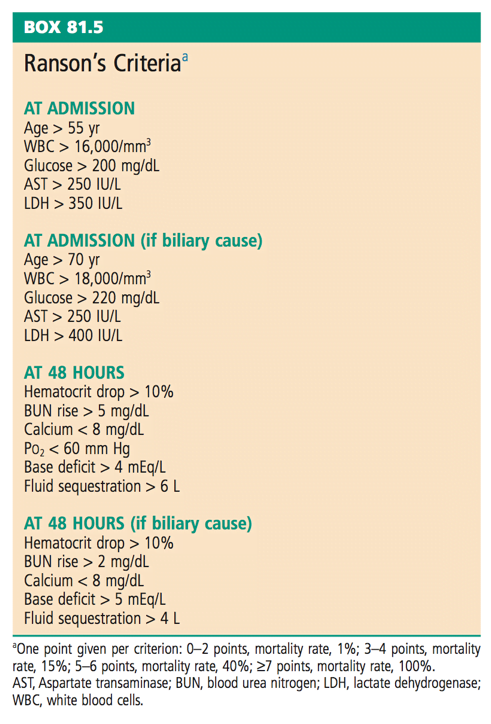 The revised Atlanta classification of acute pancreatitis is quite simple, because it breaks people down into (mild-moderate-severe). Unfortunately, you can’t really put anyone into a category until the 48 hr mark. Let’s quickly go through it now so you know what it includes…. 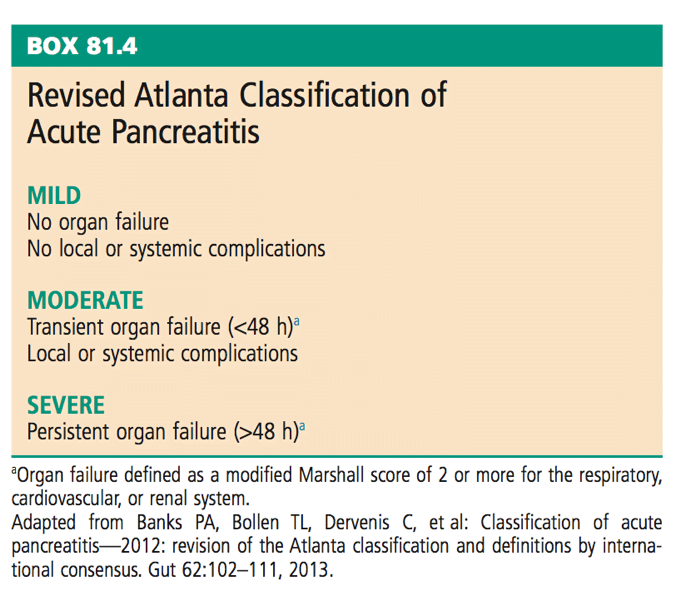 There are many other scoring tools that exist – APACHE II, CTSI, BISAP, HAPS, all of which don’t seem to be the silver bullet for acute pancreatitis. So as a result, in the ER we can’t really predict which patients with pancreatitis are going to need ICU and which aren’t…

At the end of the day we’ll have to use our best judgement based on the patient in front of us:

Question 8) What is the 5 year survival rate for pancreatic cancer? Describe typical clinical findings. How is it diagnosed? What is the management?

This is a terrible disease, because it often goes undetected until later stages and has very poor survival. 5% at 5 years from the time of diagnosis – with high risk of metastasis to the liver and lungs

These are some of the class Ia drugs – from Uptodate – where people have developed pancreatitis on a re-challenge of the drug and other causes of pancreatitis have been ruled out (e.g. ETOH, gallstones, etc.).

Amylase is an enzyme that functions in carbohydrate digestion. The levels do go up in pancreatitis, but also can rise from a myriad of other pathologies:

That’s why we use lipase more often – because its predominantly produced by the pancreas. And more sensitive.

Should we then use both? NOPE! Testing both enzymes doesn’t improve our sens/specificity. So just get the lipase (plus bilirubin, calcium, serum triglycerides, glucose, and ALT).

And on a final note – the degree of elevation DOES NOT correlate with disease severity or prognosis.

CT is only recommended in the setting of confirmed pancreatitis (labs + clinical exam) when:

In fact, to evaluate for complications of pancreatitis, it’s best to order a CT with IV contrast in (minimum) 3-7 days to look for:

Although an initial ultrasound may be unable to visualize the pancreas due to bowel gas, it can be very helpful to look for any subtle biliary tract dilatation / disease.

This post was uploaded and copyedited by Andrew Guy (@andrew_s_guy)