This episode of CRACKCast covers Rosen’s Chapter 80, Implantable Cardiac Devices. These devices are becoming more and more prevalent in our aging population, and an understanding of some of the nuances with these devices is a must. Maybe you will be shocked by what you didn’t know!

It is important to understand how these devices work, and how they can go wrong in our patients presenting to the ED

Transvenous pacemakers have been around since the 1960s! ICDs are increasingly showing mortality benefit in those patients requiring long term anti-dysrhythmics.

LVADs aren’t just unicorns anymore, you will see these in your ED!

Battery type is important – all new systems are lithium batteries. Tend to last 4-10 years depending on function and abilities of unit.

Most common cause of failure is with electrical circuitry eg.

Leads can be unipolar versus Bipolar

Pacemakers can be confusing… but remember it is programmed to do a set amount of things.  Think of it as the pacemaker is always listening to the atria and ventricles. If it does not hear / sense an intrinsic P wave or QRS complex after a set amount of time, it will fire either the atria, ventricle or both depending on its function. If it does sense a P wave or QRS, then it will inhibit its preprogrammed stimulation of the atria, ventricle, or both (ie it will reset its output to prevent competition with intrinsic electrical activity).

ICDs are similar in construction and function, just add a defib function that is done via a coil in the right ventricle and the pulse generator. 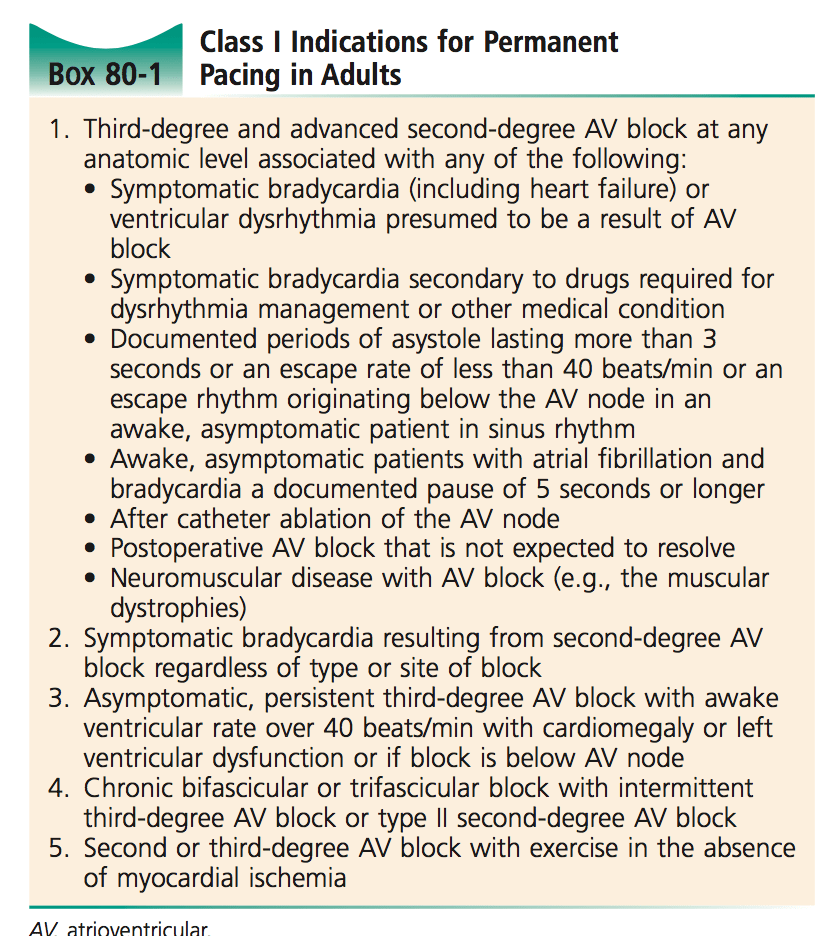 2) Pacemaker nomenclature – what do the 5 letters mean

3) Causes of pacemaker malfunction (main categories with 2 examples each) 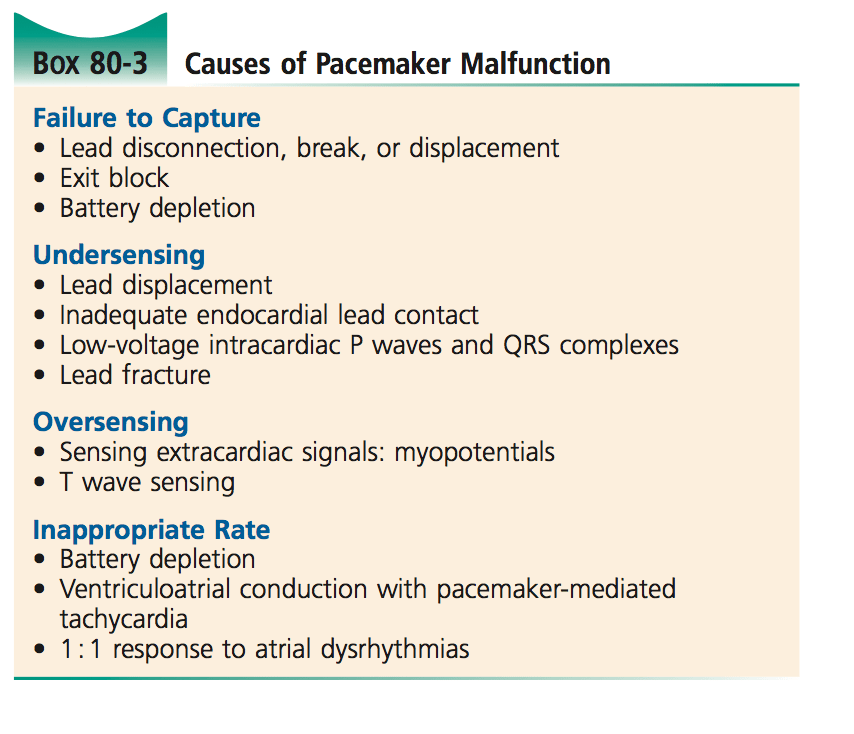 Oversensing – “occurs when electrical signal are inappropriately recognised as native cardiac activity and pacing is inhibited. These inappropriate signals may be large P or T waves, skeletal muscle activity or lead contact problems. Abnormal signals may not be evident on ECG. Reduced pacemaker output / output failure may be seen on ECG monitoring if the patient stimulates their rectus or pectoral muscles (due to oversensing of muscle activity).”

Inappropriate rate –    when in doubt: put a magnet on it!!!

Often confused with failure to sense, seen when pacemaker is firing at pre-determined interval, however competing with underlying intrinsic cardiac rhythm.

6) What is pacemaker syndrome, which type of pacer is most commonly involved, and what is the treatment?

Typically patients complain of worsening of sx that lead to pacemaker placement in the first place. Secondary to loss of AV synchrony

Most commonly seen in VVI pacemakers

7) What does magnet application do to a pacemaker? to an ICD?

ICD:     Deactivates the defibrillator (note should only be done during resuscitation efforts, comfort care or inappropriate delivery of shocks eg in SVTs) 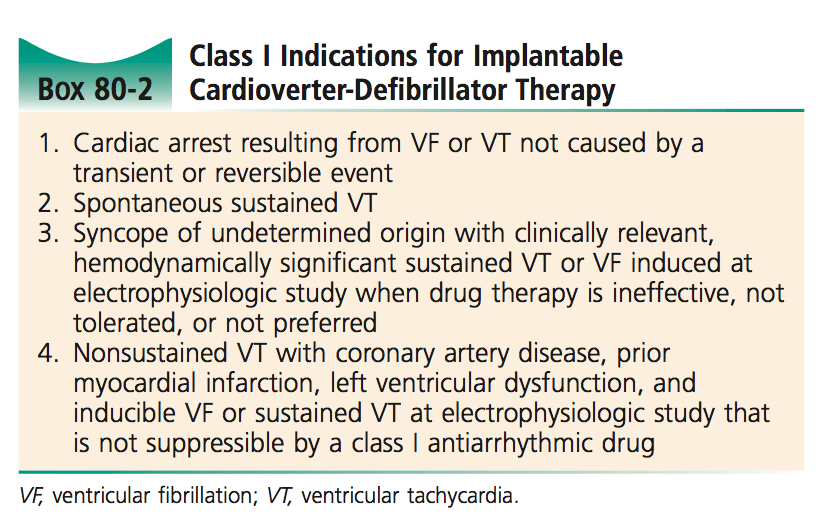 9) Causes of shock delivery in patient with ICD

10) Causes of syncope/presyncope in patient with ICD (three) 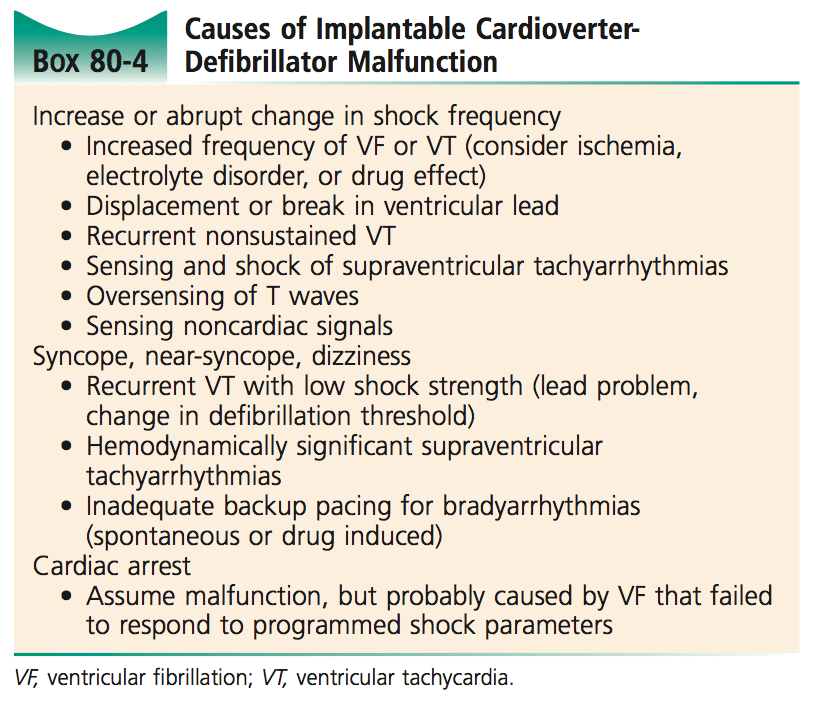 “Patient manipulation of the pulse generator (accidentally or deliberately).

The pacemaker rotates on its long axis, resulting in dislodgement of pacing leads.

Can result in diaphragmatic or brachial plexus pacing (e.g. arm twitching) depending on extent of lead migration.”

3) Describe your Approach to LVAD complications

Big shout out to Jared Baylis

This post was edited and uploaded by Ross Prager (@ross_prager)