This episode of CRACKCast covers Rosen’s Chapter 79, Dysrhythmias. This encompasses a variety of pathologies with a spectrum of management from immediate intervention to watchful waiting. Learn the essentials of the conduction pathways, where things can go wrong, and what rhythms to watch for – here. 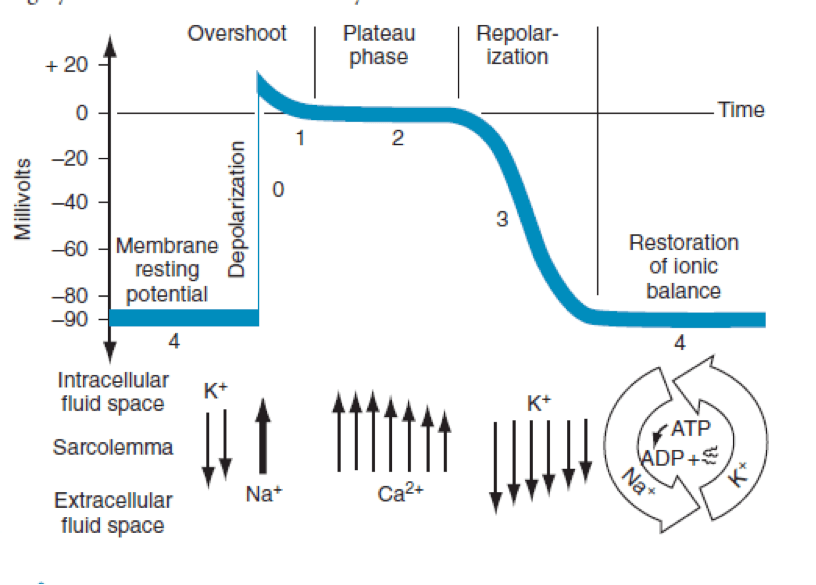 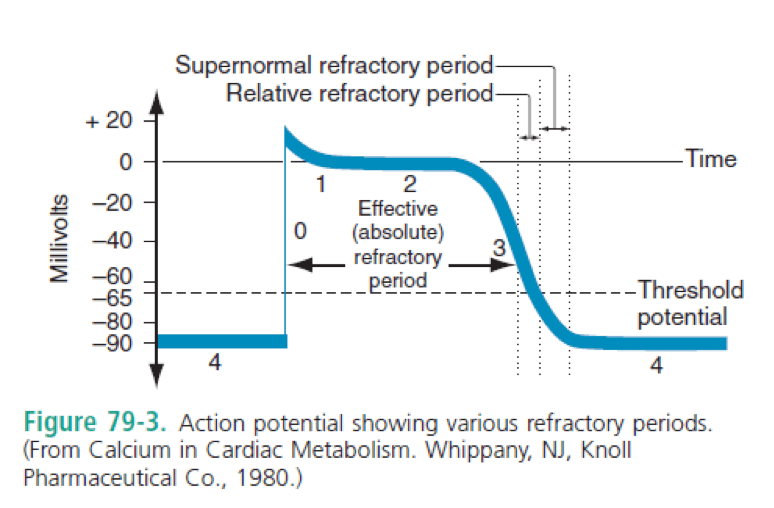 “In nonpacemaker cells, additional depolarization from a second electrical stimulus is not possible when the membrane potential is more positive than −60 mV.”

“Dysrhythmias are classified according to their electrophysiologic origin, ECG appearance, and underlying ventricular rate. Although overlap exists, the following categorization is useful:”

Classically, the approach to any specific dysrhythmias is defined on the basis of the clinical stability. Unstable patients demonstrate evidence of severe or multiple end-organ features of hypoperfusion, such as:

Stable patients may be asymptomatic or have mild symptoms, such as light-headedness, dyspnea on exertion, palpitations, or mild anxiety. In practice, clinical stability is a continuum; in the absence of profound altered sensorium or hypotension, a clear line distinguishing stable and unstable patients is often not present.

It is important to consider whether a dysrhythmia is the cause or an effect of a clinical presentation; for example, rapid atrial fibrillation may be causing hypotension or resulting from profound volume depletion. Failure to consider the clinical situation can lead to an inappropriate focus on diagnosing and treating the rhythm to the detriment of the patient. With recognition of this need to incorporate the overall clinical picture, treatment of those with a dysrhythmia and clear instability is empirical and assumes the rhythm is the cause, whereas stable patients can be approached in a more systematic and thoughtful manner to identify the cause and choose the most appropriate therapy.”

[1] What is the blood supply of the following parts of the conduction system: SA node, AV node 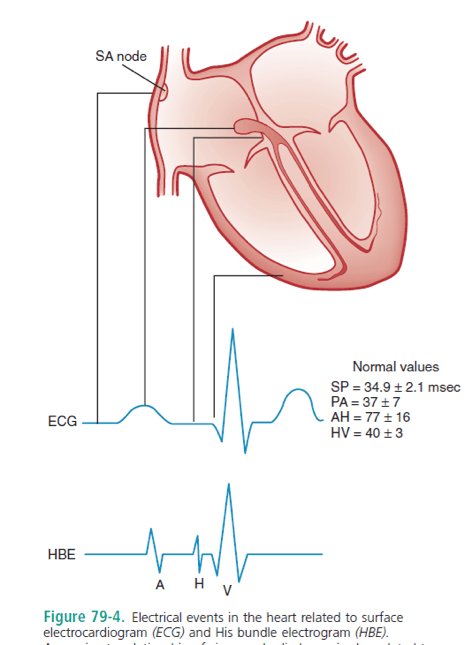 [2] What are the three pathophysiologic mechanisms for dysrhythmias?

> early or delayed after depolarizations

[3] What causes & how does AV nodal reentry tachycardia occur? 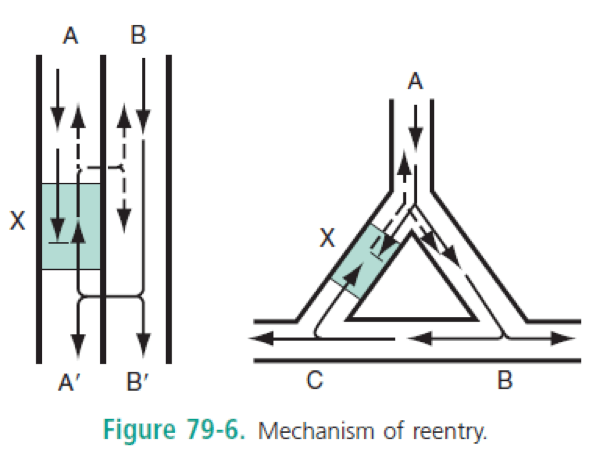 “For a re-entry mechanism, two alternate pathways for conduction must be present and one path must have a longer refractory period. The unequal responsiveness of the limbs creates a functional unidirectional block such that when the impulse exits one limb, it may then reenter the other in retrograde fashion. The cycle is then repeated, creating a self-sustaining or “circus movement” tachycardia that can appear orderly or disorderly (i.e., fibrillatory).” – Rosen’s 7th Edition

[4] List the classes of antidysrhythmics. Describe their mechanism of action and usual uses, as well as an example of each

“The subclasses IA, IB, and IC are distinguished on the basis of differential effects on depolarization, repolarization, and conduction.” – Rosens 7th Edition

[5] How does digoxin work as an antidysrhythmic? When is it used?

“Digitalis compounds have a variety of effects on myocardial cells. Digoxin inhibits the ATP-dependent Na+-K+ exchange pump, increasing intracellular Na+ concentrations and decreasing intracellular K+ concentrations. The resultant increase in intracellular Ca2+ concentration accounts for the positive inotropic effects of digitalis. Digoxin can behave as an excitant, a depressant, or both. Excitant effects of digoxin have to do with enhanced automaticity and triggered activity, particularly at high therapeutic or toxic doses. At the same time, digoxin slows AV node conduction at therapeutic doses via lengthening of the refractory period.”

“Digoxin (0.25-0.5 mg IV) can control the ventricular rate in patients with SVTs, including atrial fibrillation and atrial flutter. Because of its delayed onset of action and narrow therapeutic window, however, digitalis is not a first-line agent for emergency therapy. It is not true that digoxin promotes conversion to a sinus rhythm any more than other rate-controlling agents.” – Rosens 7th Edition 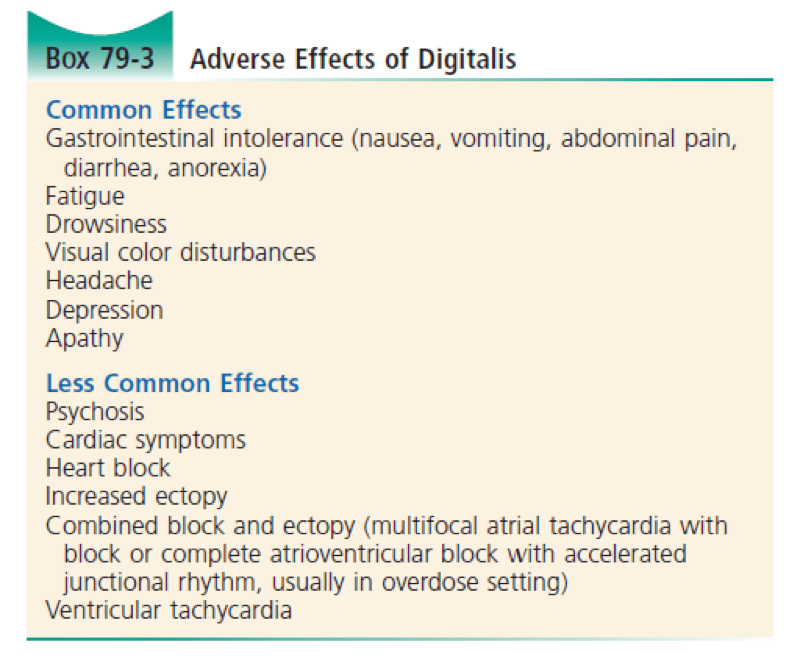 Umbrella term for a group of dysrhythmias from disease of the sinus node and its surrounding tissues:

“SSS is most common in elderly adults, a result of fibrotic degeneration of the cardiac conduction system. It is also associated with cardiomyopathies, connective tissue diseases, and certain drugs.”

In the acute setting, SSS is suspected when an elderly patient has syncope and the ECG demonstrates sinus impulse abnormalities. Long-term management often requires permanent pacemaker placement for symptomatic bradycardia, in addition to any conventional therapy for atrial fibrillation.”

Keep them slow…..even though they need a pacemaker!

[7] What are three ECG presentations of sick sinus syndrome?

Think about it in any elderly patient with syncope!

For a quick recap of bradycardias:

<60 BPM, failure of the SA node = escape rhythm is from the ectopic pacemaker.

“This can occur at the level of the atria, the AV node (most common), or the His-Purkinje system”

[9] Differentiate between the two types of  2° heart block with respect to etiology, ECG appearance and management. 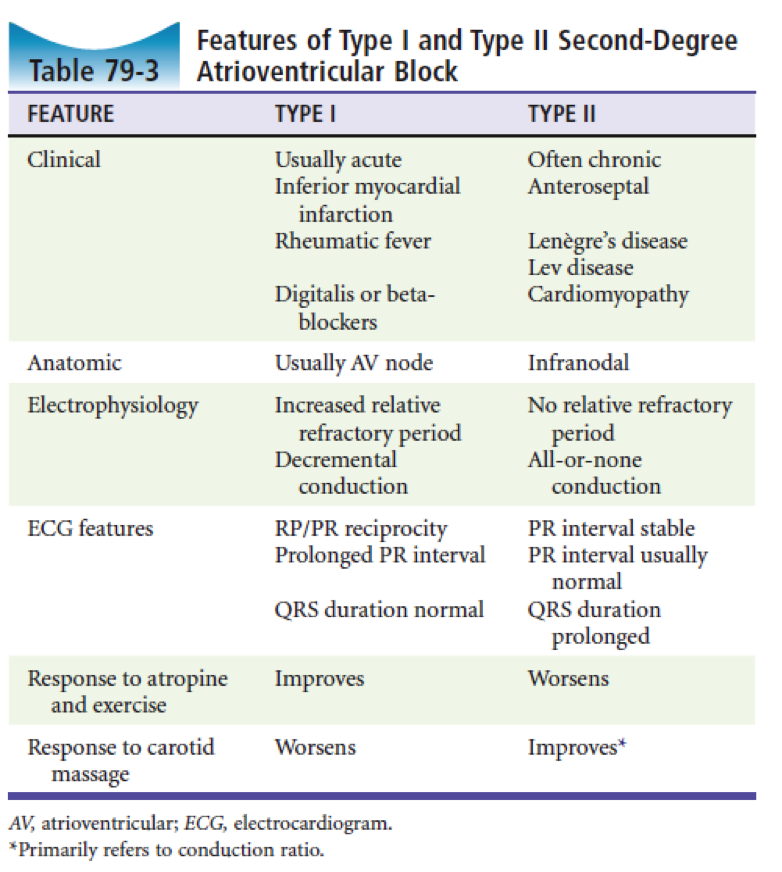 “a sinus rhythm at a rate of 70 P waves per minute with a 2 : 1 ratio (a ventricular rate of 35 beats/min) represents profound AV block and dysfunction. The term high-grade second-degree block is best applied to conduction disturbances that prevent physiologic ventricular response rates and not solely to higher conduction ratios.”

E.g. 2:1 conduction with atrial flutter going at 300 bpm, means the ventricular rate is 150…which is normal, but in the case above, the impulse is being SLOWED down much more than normal (AV node generates impulses normally at a rate of 45-60 bpm)…

Managed with pacing, because atropine is normally ineffective.

FROM LIFE IN THE FAST LANE:

“Complete heart block should not be confused with: 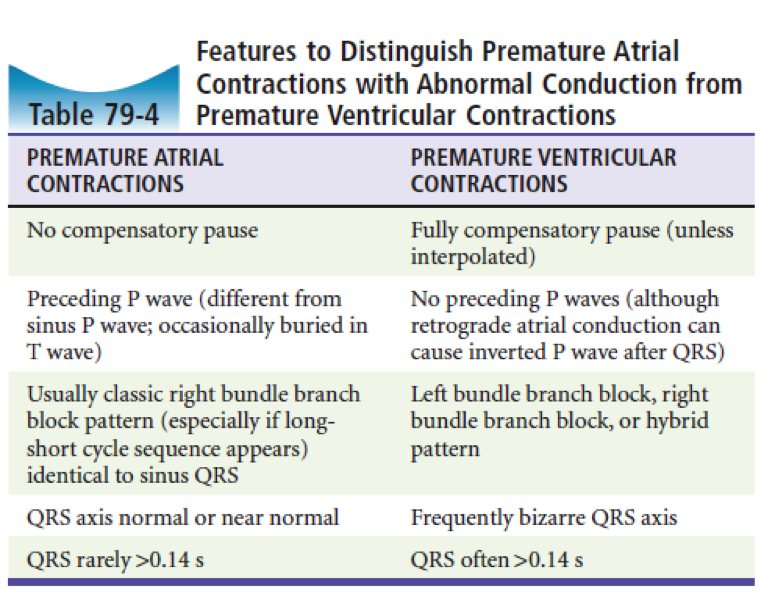 What is a compensatory pause? Is it more common with premature atrial or premature ventricular complexes, and why? 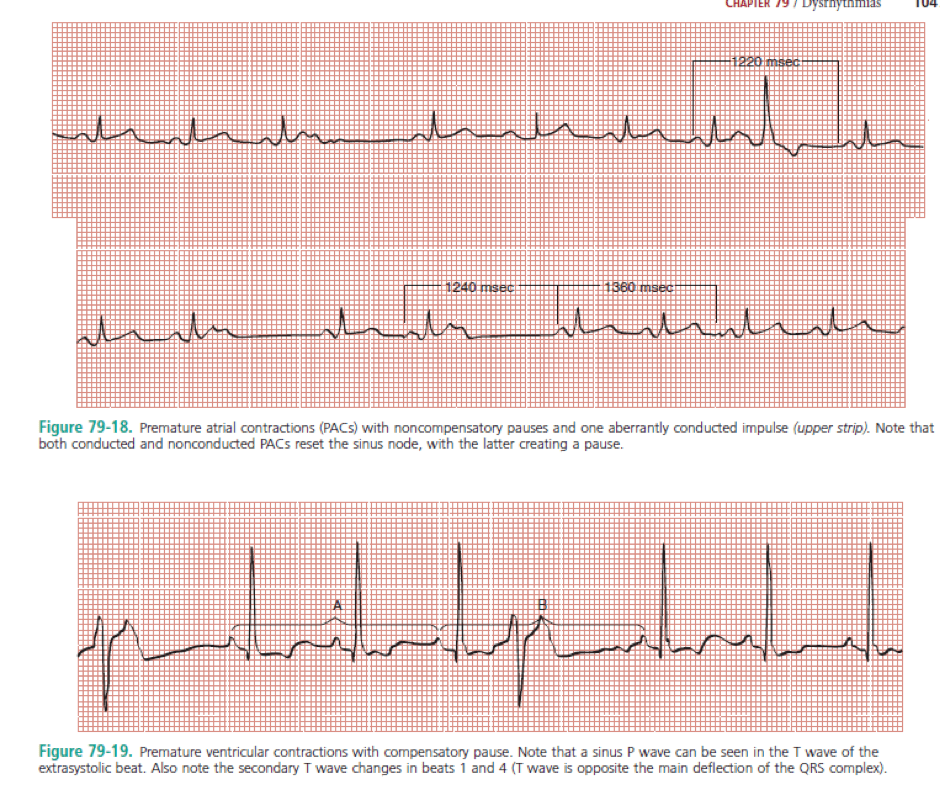 “Most PVCs capture the AV node, making it refractory to the next arriving atrial impulse. Because retrograde conduction of a PVC rarely extends far enough to capture and reset the SA node, however, atrial impulses continue to arrive at the AV node at the intrinsic sinus rate. As a result, the R-R interval surrounding a PVC ends up being equal to twice the intrinsic R-R interval length (see Fig. 79-19), a phenomenon known as a compensatory pause. Rarely, a PVC will capture the SA node, resulting in a noncompensatory pause, or will fail to capture the AV node, leaving the underlying rhythm completely unaffected (a so-called interpolated PVC; Fig. 79-20).” – Rosen’s 7th Ed.

[13] Give a differential diagnosis of irregularly irregular tachycardia.

“Patients with WPW and other pre-excitation syndromes often have one or more of the classic features missing on the surface ECG. Also, some patients with WPW-like patterns on their resting ECG never develop symptomatic tachycardia.”

[15] Explain the concept of antidromic and orthodromic conduction with respect to WPW. Which patients with WPW should not receive AV node blockers?  Why?

“Orthodromic AV-re-entrant tachycardia is indistinguishable clinically from AVNRT unless the presence of an accessory pathway is known and is treated in the same way, with vagal maneuvers and adenosine as first-line therapy, followed by calcium channel blockers and beta-blockers as second-line agents.” 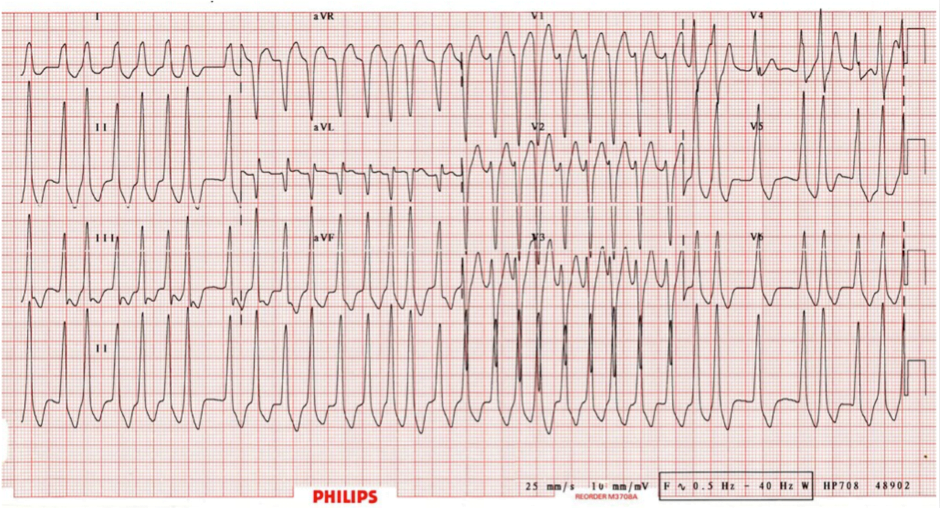 “Likewise, with a very rapid irregular tachycardia (i.e., atrial fibrillation with a ventricular rate exceeding 200) accompanied by a wide-complex QRS, the likelihood of accessory pathway conduction should be considered and nodal blocking agents again withheld. Procainamide is recommended any time an accessory pathway with wide QRS complexes or very rapid rates exists, with amiodarone as a secondary choice despite theoretic concerns about its nodal blocking properties. Electrical cardioversion (100-200 J) is indicated for ventricular rates greater than 250 beats/min, clinical deterioration, or failure of pharmacologic therapy.”- Rosen’s 7th Ed. 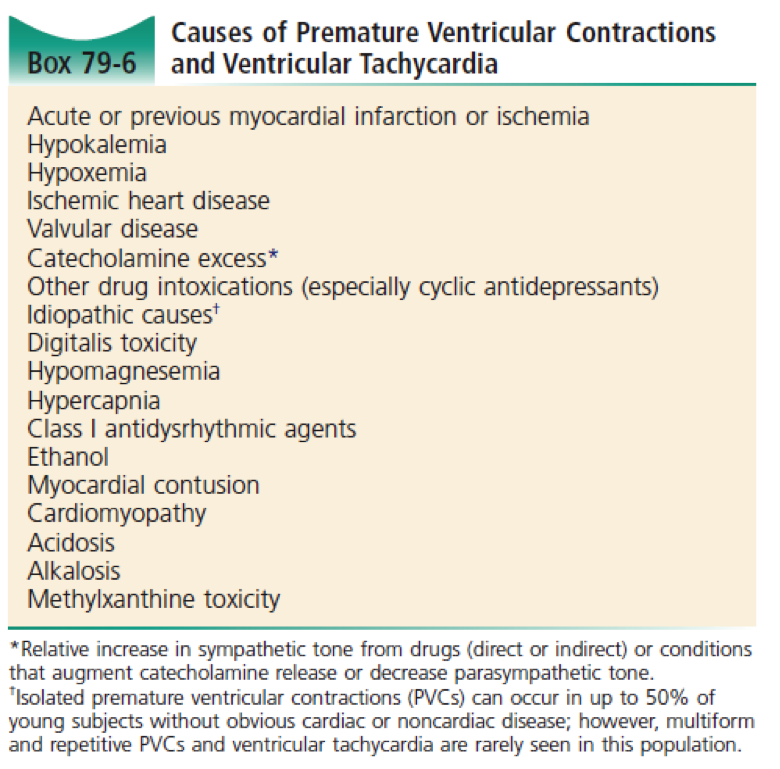 [17] How do you differentiate between SVT with aberrant conduction & ventricular tachycardia?

Bottom line, when in doubt treat it like VT! 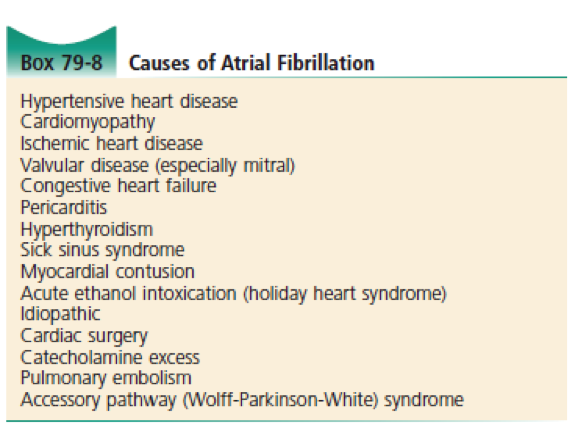 [19] Describe the management of AFIB, including a discussion about the CHADS2 score and long term stroke risk.

…..This is where Rosen’s lets us down. Some of the information here is not standard of care currently. We’d suggest you check out:

But for the sake of a quick overview, let’s cover some of the details… 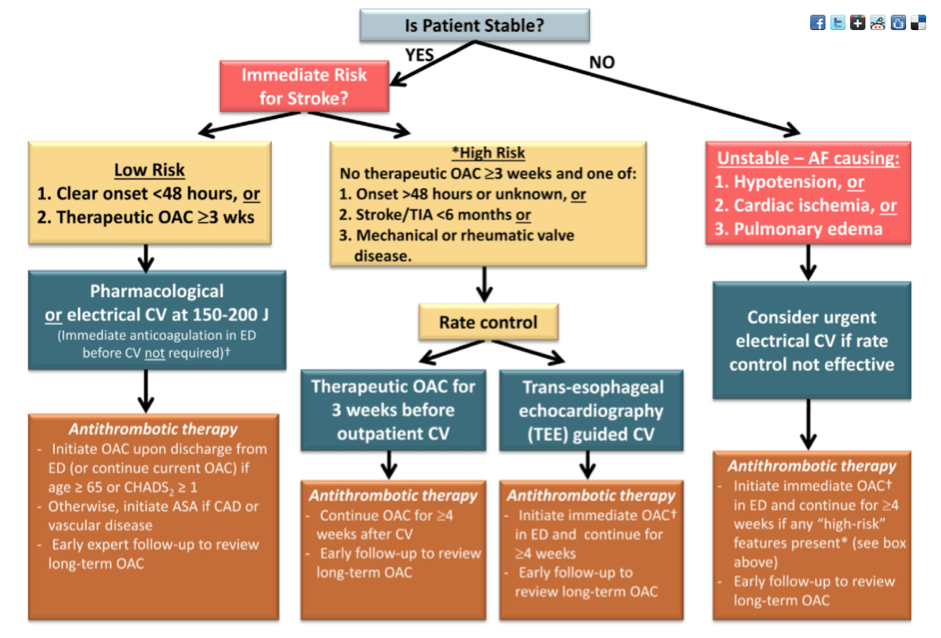 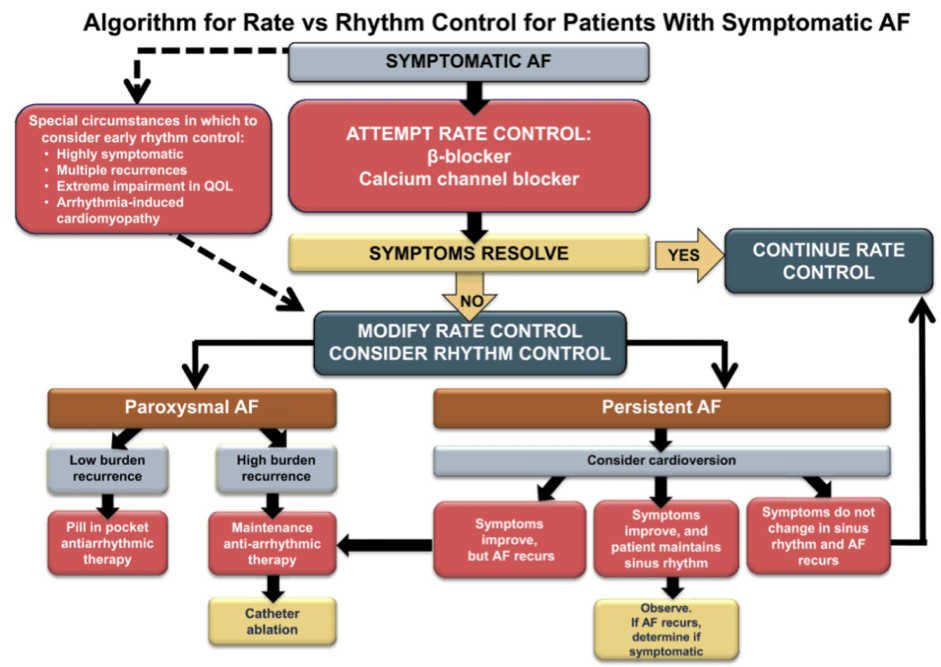 [20] What is Brugada syndrome? What is the management? 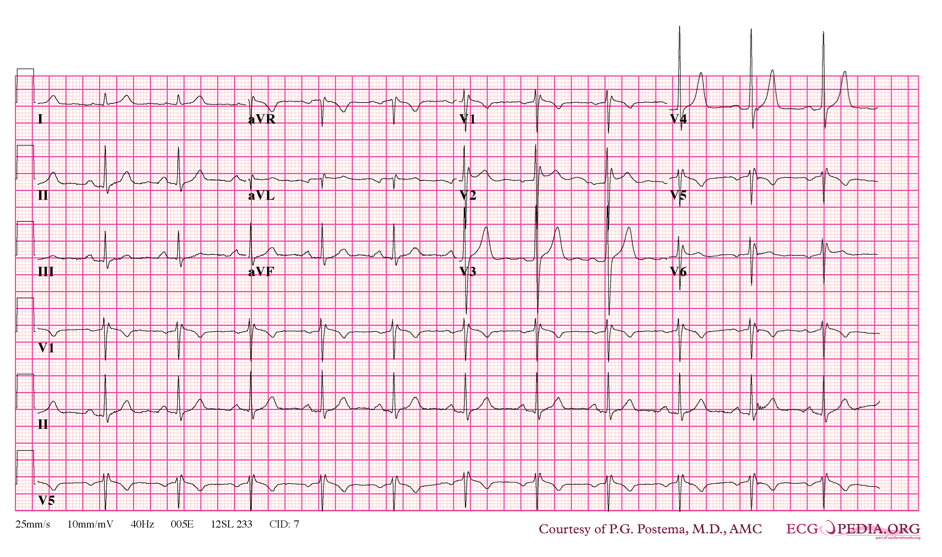 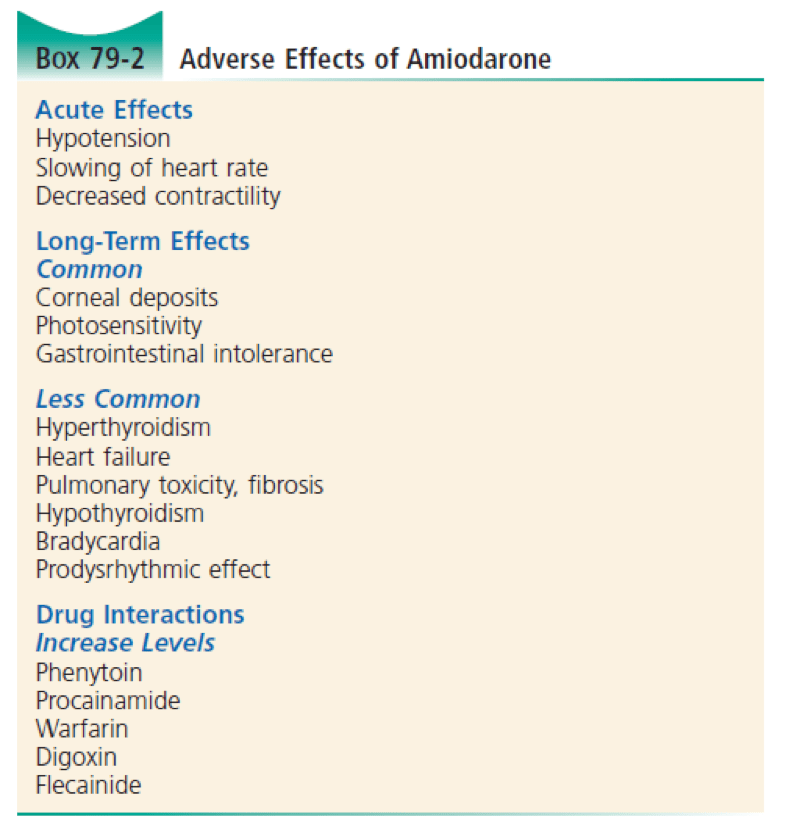 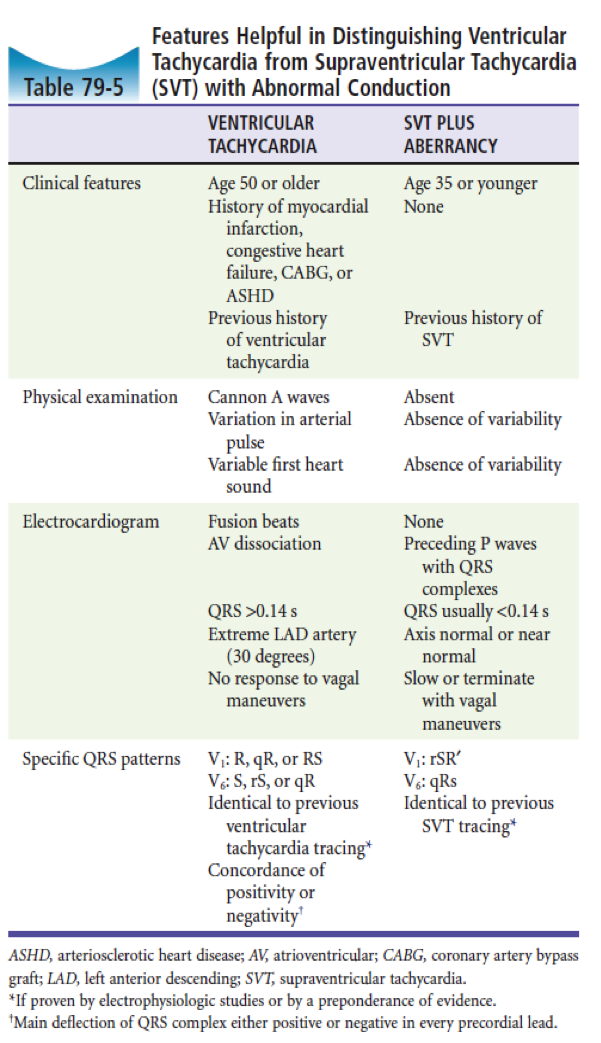 [3] Describe the Brugada approach to the diagnosis of VT 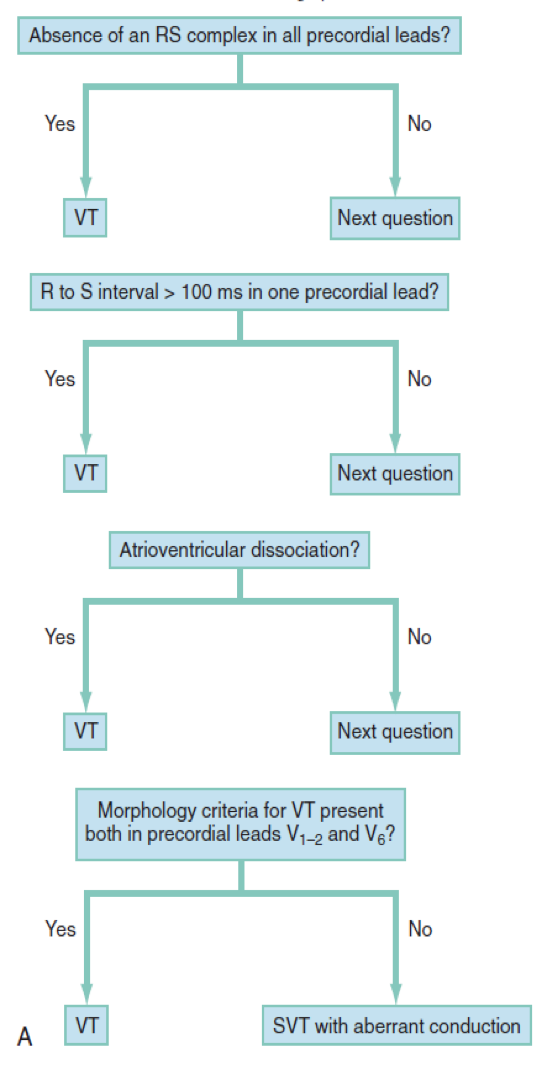 “Only when none of the Brugada criteria are present is a supraventricular cause diagnosed. Although the original investigators found excellent sensitivity (98.7%) and specificity (96.5%) in detecting VT, follow-up investigations have not duplicated this level of accuracy in ED patients (sensitivity 92-94%). Often, physicians either cannot complete the assessment or cannot agree on the findings. In patients receiving class I agents, the Brugada criteria are less reliable.” – Rosen’s 7th Ed. 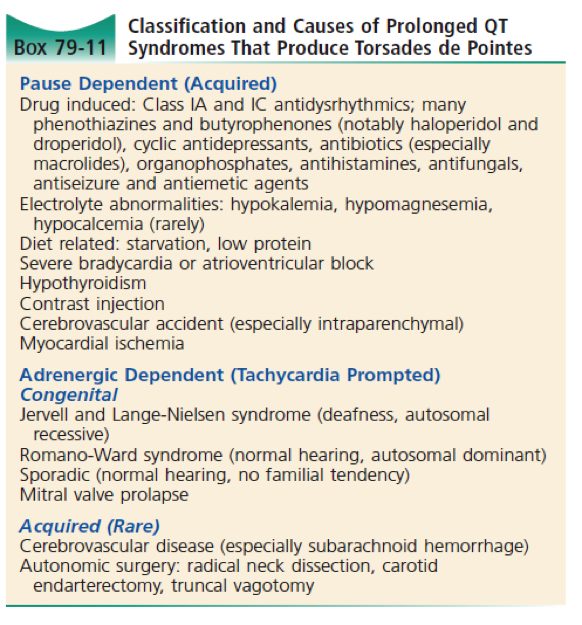 “Also known by the less precise term paroxysmal supraventricular tachycardia (PSVT), AVNRT is characterized by a regular narrow-complex rhythm and a ventricular rate of 160 beats/min or greater (Fig. 79-28). It is the most common non sinus tachyarrhythmia in young adults. As its name suggests, AVNRT occurs as the result of a re-entry circuit within the AV node, with normal conduction (narrow QRS) down the bundles of His, and with retrograde conduction (inverted P waves typically buried within the QRS) up into the atria (Fig. 79-29).

The onset of AVNRT is typically abrupt and frequently arises in the context of strenuous exercise or emotional stress. Termination is also abrupt, either spontaneously or following vagal maneuvers that patients are taught or just adopt instinctively. Most patients with AVNRT are symptomatic, but hemodynamic instability is unusual in the absence of underlying cardiopulmonary disease.

If vagal maneuvers fail to restore sinus rhythm, first-line field or ED therapy for AVNRT is adenosine (6 mg rapid large-bore intravenous bolus followed by a flush; repeat with 12 mg if no effect on rate). This approach is successful in 85 to 90% of cases. In refractory cases, diltiazem, esmolol, or metoprolol may be used. Rarely, synchronized cardioversion (at 100-200 J, synchronized and biphasic preferred) is required to terminate AVNRT that is refractory to pharmacologic therapy or in a patient with hemodynamic instability.

Most patients can be discharged once AVNRT has been terminated with adenosine or vagal maneuvers. Patients with frequent recurrences are candidates for prophylaxis (typically with a beta-blocker or calcium channel blocker) or ablation therapy.” – Rosen’s 7th Ed.

[7] What is the Ashman phenomenon?

“The Ashman phenomenon refers to aberrant ventricular conduction of an early-arriving atrial impulse following a relatively long R-R interval, as a result of a partially refractory His bundle. Such aberrantly conducted impulses are often seen in atrial fibrillation but can occur in any irregular rhythm in which long-short cycle sequences occur, and they typically assume an RBB block pattern (Fig. 79-26). Ashman beats can be mistaken for PVCs or paroxysmal VT.” – Rosen’s 7th Ed.