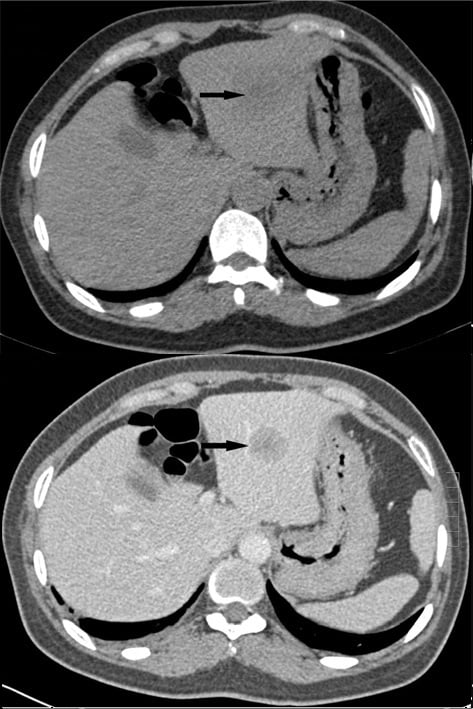 A 73-year-old male presents to your Emergency Department with vague LLQ abdominal pain. Your differential includes stones/pyelonephritis, diverticulitis, obstruction, and neoplasm. You want a CT scan to assist in diagnosis. A colleague mentions you need oral contrast to diagnose obstructions, and intravenous contrast to diagnose diverticulitis but intravenous contrast hinders the diagnoses of stones. What is the optimal scan?

CT Scans and the role of contrast

Oral contrast gathers and illuminates bowels, improving the ability to detect fistulae, interloop abscesses but reducing the ability to diagnose bowel wall pathology(enteritis/angioedema).​1​ Logistically, oral contrast administration takes hours and frequently does not traverse the entire gut, providing limited diagnostic utility.​2​ This can prolong length of stay.​3​ Plus, it can be unpalatable, resulting in vomiting.

Routine use of oral contrast has recently been questioned. While historically touted to facilitate diagnosing obstructions, perforations, and inflammatory conditions (i.e., appendicitis), these assertions are being challenged. The latest multidetector CT scanners have improved image quality, reducing the need for oral contrast to identify structures. Moreover, normal bowel secretions and air already serve as a contrast medium in small bowel obstructions, while contrast leakage from bowels has poor sensitivity (19-42%) for perforations.​1,4​ Recent studies show similar detection rates of appendicitis, diverticulitis, and small bowel obstructions irrespective of oral contrast.​3,4​  Moreover, centres that have omitted routine oral contrast for acute, atraumatic abdominal pain saw only 0.2% of their patients returning for repeat CT scans with contrast.​5​

What about intravenous contrast?

Intravenous contrast gathers in the blood, solid organs, kidneys, and urinary tract. It can delineate organs and the surface of the GI tract, helping show inflammation, perforations, neoplasms, and ischemia.​6​ For these reasons, the American College of Radiologists broadly recommends intravenous contrast for nearly all CT scans in abdominal pain using the “appropriateness criteria” (see Table 1).​7​ Regarding kidney stones, intravenous contrast is usually not appropriate when stones are primarily suspected, as non-contrast CT scans demonstrate 95% sensitivity for diagnosing kidney stones.​8​ However, in an undifferentiated patient, the use of intravenous contrast does not reduce sensitivity for detecting obstructing stones or stones > 3mm, which represent the majority of clinically relevant stones.​9,10​

For many historical indications, the efficacy of oral contrast has faded given advances in CT scanning technology. It seems reasonable to defer oral contrast for the initial study in an anatomically normal GI tract (no bowel surgeries or fistulizing disease). Intravenous contrast can be broadly applied with minimal drawbacks as the initial imaging study for most abdominal complaints.

You readily obtain a CT scan administered with only intravenous contrast. His CT scan shows acute sigmoid diverticulitis with no frank perforations. As he is well-appearing, afebrile, and immunocompetent- he is discharged on oral antibiotics and told to follow up with his family doctor in 7 days.

This was a well written and well researched article. I feel reassured my practice is backed up by some research. Good discussion of IV contrast and oral contrast. Note that there are certain times where a non-contrast scan may be most appropriate which isn’t captured in your chart. (e.g., No IV access possible, predialysis patient). Obviously, there are limitations to such a scan. But a non-contrast scan is better than none. Also worth noting is the role of adipose in CT scans. At my centre, when looking for infectious/inflammatory changes (specifically scans to rule out appendicitis, pancreatitis, and diverticulitis), we forgo the oral contrast in obese (BMI≥35) patients because the adipose assists in making the diagnosis. While people order CT scans for duodenal/gastric pathology, it is not optimal at looking for duodenal/gastric pathology (which really requires gastroscopy), unless there\'s a transmural perforation.

Shankar Sethuraman is a Family Medicine Resident at the University of Toronto with an interest in emergency medicine. His interests include the use of technology in healthcare and quality improvement in Emergency Departments. Outside of medicine, he enjoys tennis, repairing bikes, and cheering on his favorite sports teams (Go Raps!).

I’m Alan, a resident in Family Medicine at the University of Toronto’s Michael Garron Hospital site. My interests include pedagogy, mentorship, and all things PoCUS. Outside of medicine, I have a passion for espresso and can often be found on biking, hiking, and nature trails.

Edward is a Family Medicine Resident at the University of Toronto. His interests include medical education and health policy. In his free time he can be found playing board games or cooking up a storm.