A resuscitation is in progress for an elderly gentleman. Health care providers try frantically to restore signs of life. Chest compressions are ongoing, a breathing tube is placed, large intravenous line inserted, electrical shocks and medications given. Eventually the team realizes that they have exhausted all possibilities. To do more would be futile. The team leader “calls the code”.  People mill away … one resident chides another about stealing her central line. The housekeeping staff enter to clean up the mess on the floor while the orderlies drape the body for viewing. An elderly emergency physician stands contemplatively at the bedside for a moment. He nods his head and then walks out. What was that about? Was he acknowledging death? Was he praying? Having a moment of silence? Should he?

I had to re-learn how to think of my patients as people after a crazy night in the ICU. We had tried in vain to salvage a not so old man with fulminant pancreatitis and all the complications you can think of. He had no immediate family and died quietly in the ICU surrounded by me and the bedside nurse. Exhausted, I went back to my call room and early in the morning the nurse called to tell me that she had located a distant relative. “You know that guy was famous?” she said ” … he used to coach (insert former World Heavyweight Boxer of renown)”. Wow! … To me he was the patient in bed 9 that we had tried in vain to salvage from the brink all night. Sure he had a name, but not a story – or at least I never considered what his story was. I reflected … What happened to the idealist that got into medicine all those years back? When did he stop feeling? How did it happen?

Around about the same time I read an article “The Code” in the NEJM by Treadway1 and was struck how many times I had been that character that she describes in her article. In her article Treadway laments the fact that health care providers walk away from codes without pausing to reflect and acknowledge the deceased.1 They do so for many reasons – mainly because they need a certain level of detachment in order to perform their jobs. In medicine we learn this detachment by early on focusing on anatomy and pathophysiology rather that humanness.

Detachment is learned and protective
Detachment is also harmful
Physicians perform rituals in private
Perhaps gestures should be public:
“Moment of Silence”

Why detachment is bad:

You may think that you’re compartmentalizing and coping, but in truth you’re accruing mental baggage that affects your overall well-being. In our study 51% of respondents had been involved in at least 15 unsuccessful codes. Think about it …How many people do you know who have watched 15 people die? You think that doesn’t scar you in some way?

Here’s an article from the NY TIMES that describes how oncologists struggle with the death of their patients.2 They distanced themselves and withdrew from patients as the patients got closer to dying – behaviours, the authors point out,  that are most unhealthy, but exist because of the expectation of a stiff medical upper lip. According to these authors,2  here’s the kicker:

“The impact of all this unacknowledged grief was exactly what we don’t want our doctors to experience: inattentiveness, impatience, irritability, emotional exhaustion and burnout.”

When asked how they would like to die – Canadians are unequivocal. Most prefer to die at home in comfort, surrounded by loved ones. In truth almost 50% of people in this country die in hospital – and some of them in the ER – alone, naked, undignified and surrounded by strangers who are oblivious to their life story.

In his journal article, Rohrich muses how quickly our life’s work can fade from record and shares how he would like to be remembered during his “moment of silence”3 – why should we expect differently from our patients?

Many ICU’s and palliative care wards do go to lengths to accommodate spiritual and cultural requests to provide solace and dignity in death – but there are several obstacles to providing this in the ER.

Towards a culture that favours reflection:

What if there was a way to restore a bit of dignity to those dying in the ER? What if there was a way to replace some of the lost idealism? Treadway suggests that we might consider honouring the life lived [and lost] by having a moment of silence after unsuccessful codes.1 Fantastic! But how do you go about introducing such a practice that flies in the face of our learned unemotional detachment? Start with a lit search … surely someone else has looked into this?! Turns out no one had – until we did.

We created a questionnaire and sent it out to all our ER staff, residents and allied health professionals. The responses [42% response rate] that we got affirmed that health care providers DO in fact perform a quiet gesture after death in the ER – almost 50% of the time. What’s more – most [70%] thought that it would be a good idea to have a moment of silence – for the patient, the families AND for their own benefit in terms of closure. Most thought that a script could be an option [e.g. “please let us have a moment of silence for Mr Smith”] and that the code leader should be the one to initiate the moment of silence.

Here is our poster of acknowledging death in the ER. 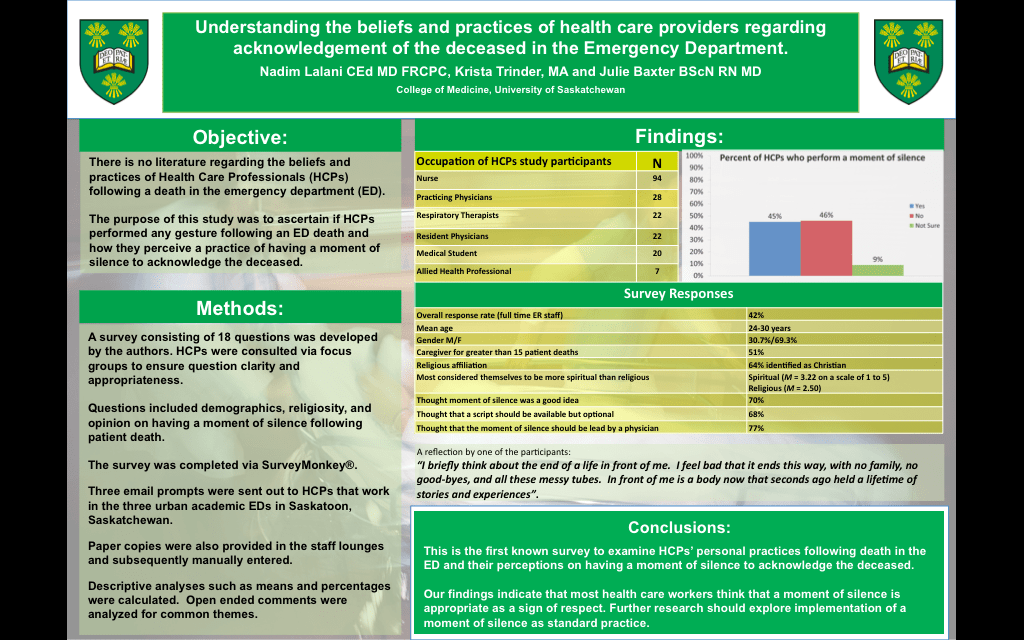 What’s next? I’m off to ICEM in Dublin Ireland to present this research. I hope that I come away with some ideas about how to implement it [comments welcome]. I would encourage all you readers to start this conversation and see where it goes. Because as Treadway1 states:

“Perhaps if we could discuss this part [death] of our practice lives as easily as we discuss a diagnostic dilemma or the proper management of a complex case, we might create a culture that supports and nourishes us as we try to come to terms with experiences that are part of our daily lives.”

Note: This post was originally published on the ERMentor blog. It was copyedited by Dat Nguyen-Dinh (@dat_nd) and Sean Nugent (@sfnugent)