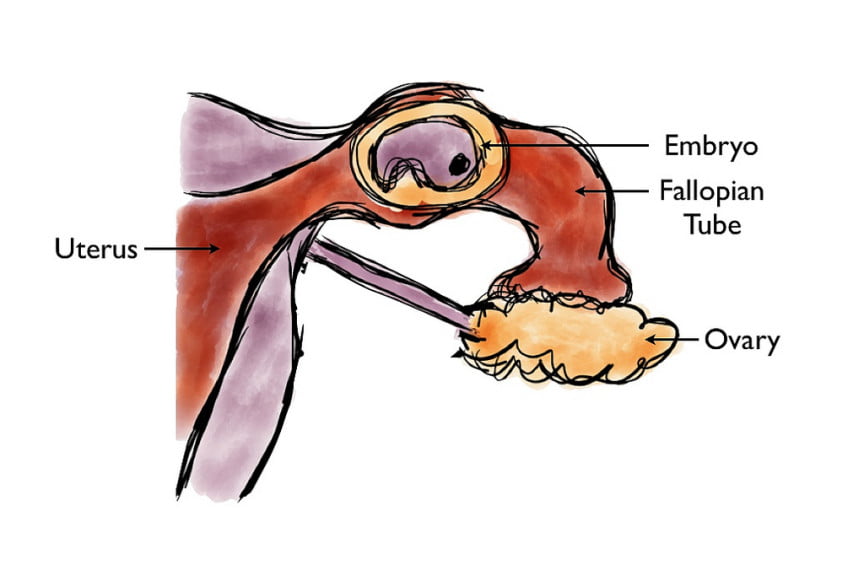 For female patients presenting to the emergency department with a positive serum β-HCG as well as abdominal pain, vaginal bleeding, syncope, or hypotension, the prudent emergency physician must rule out an ectopic pregnancy (EP). This potentially life-threatening entity is estimated to occur in 1.5 to 2% of all pregnancies and ruptured ectopic pregnancies account for 6% of all maternal deaths [cite num=”1″]. Point-of-care ultrasound (either trans-abdominal or trans-vaginal) has become the standard of care when assessing a patient for possible EP as the finding of an intrauterine pregnancy (IUP) can rule out an EP, assuming no risk factors for heterotopic pregnancy (fertility treatment is by faaaar the biggest one that needs to be considered) [cite num=”2″].

However, in approximately 20-30% of cases, the ultrasound will fail to reveal an IUP which leaves the emergency physician no further ahead [cite num=”3,4,5″]. Some diagnostic algorithms propose that at this point, the physician should use the “β-HCG discriminatory zone” to assess for the likelihood of an EP [cite num=”6″]. This level is defined as the serum β-HCG level above which ultrasound is expected to detect a viable IUP. Classically, this level is defined as a β-HCG level of 1,500 mIU/mL for trans-vaginal and 6,000 mIU/mL for trans-abdominal ultrasound.

Thus, if a patient’s serum β-HCG level is above the discriminatory zone and the woman has no visible IUP on ultrasound, we are told that the physician should be very concerned for the possibility of an EP. Should the physician be any less concerned about the possibility of an EP if the β-HCG level is below the discriminatory zone? Is it just too early for an IUP to be seen on ultrasound with lower levels of β-HCG? Let’s take a look at the literature…

A 23-year-old woman presents to your Emergency Department with two days of lower pelvic pain and vaginal bleeding. She tells you she missed her last menstrual period so she took a home pregnancy test which was positive. Her last menstrual period was about eight weeks ago. This is her first pregnancy and she is otherwise healthy with no medical issues or routine medications. Upon further questioning you find out she has been treated for Chlamydia several times.

Your examination reveals a woman who is slightly diaphoretic and very anxious. Her vitals are stable. Her abdomen is soft but tender to the lower abdomen, particularly at the left lower quadrant. There is no rebound tenderness. A speculum exam reveals scant blood in the vaginal canal but a closed cervix. A bimanual exam is unremarkable.

A bedside transvaginal ultrasound is unable to identify an IUP. You order a serum β-HCG level which comes back at 606 mIU/mL.

How useful is the β-HCG discriminatory zone in a suspected ectopic pregnancy?

The Evidence for the discriminatory zone

This idea of the discriminatory zone – that a physician should be concerned for an EP if a woman has no visible IUP on ultrasound and a β-HCG level above the discriminatory zone – is not as well supported in the literature as we were previously led to believe. Only one study by Mol et al. (1998) was able to generate a large enough positive likelihood ratio that would support this claim and significantly alter clinical decision making [cite num=”7″]. Meanwhile, other studies such as Kaplan et al. (1996) and Wang et al. (2011) found that patients with an indeterminate ultrasound and a β-HCG level below the defined discriminatory zone were at higher risk for ectopic pregnancy [cite num=”3,5″].

In reality, a woman with an ectopic pregnancy can present at almost any β-HCG level as evidenced by the study by Barnhart et al. (1994). It revealed that patients with ruptured ectopic pregnancies could present with a β-HCG level from as low as 10 to as high as 189,270 mIU/mL [cite num=”9″]. Moreover, a recent study by Ko et al. (2014) found that even if a woman has an indeterminate ultrasound and a β-HCG level above the discriminatory zone, she is just as likely to have a viable IUP as she is to have an EP. They found the highest β-HCG level without an initially detectable IUP was 9,083 mIU/mL which then went on to develop into a viable IUP [cite num=”10″].

In 2012, the American College of Emergency Physicians provided a Level B recommendation to discard the use the β-HCG discriminatory zone to exclude the diagnosis of EP in patients who have an indeterminate ultrasound and a Level C recommendation to obtain specialty consultation and arrange close follow-up for those with indeterminate ultrasound results [cite num=”11″]. Instead, if the patient is stable then the physician should obtain a thorough history assessing for risk factors of ectopic pregnancy, obtain a formal ultrasound, and trend the β-HCG for doubling in 48 hours.  More appropriate diagnostic algorithms have been developed that take these recommendations into account and do not use the discriminatory zone [cite num=”12″].

This blog post was copyedited by Dr S Luckett-Gatopolous (@SLuckettG) and Dr Fareen Zaver (@fzaver). It was uploaded by Dr Brent Thoma (@Brent_Thoma).

Tiffany Chow is a Family Medicine Resident at Queen's University.