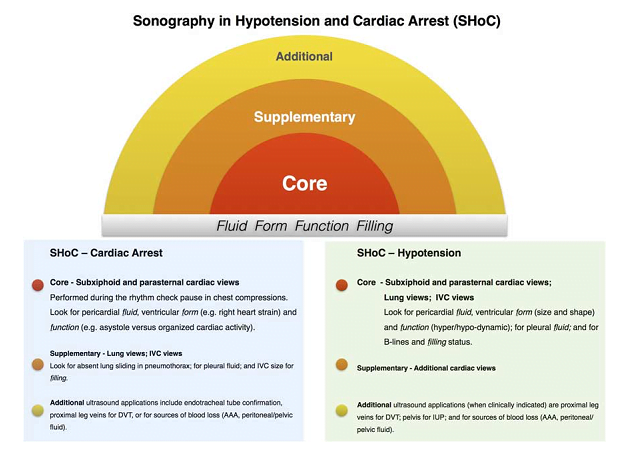 Cardiac arrest and hypotension are synonymous with emergency medicine. Over the years, point of care ultrasound (PoCUS) has become an extension of our stethoscope. The recently published consensus statement from the International Federation for Emergency Medicine (IFEM) aims to provide guidance for PoCUS use in these situations, and describes the Sonography in Hypotension and Cardiac Arrest (SHoC Consensus) protocols.1

The guidelines were developed based upon expert consensus formulated using three rounds of a modified Delphi approach. Recommendations were based on existing protocols and relevant literature. Disease incidence was also considered, and scanning is to be prioritized based on clinical probability.

Ultimately, two protocols were developed, one for cardiac arrest and one for undifferentiated hypotension. Each protocol included core views, which are performed routinely for all patients; supplementary views, which are only performed on a case by case basis; and additional scans, which are performed when additional investigation is required. When interpreting each view, it is important to investigate each of the “4 Fs”: fluid, form, function, and filling. This approach is illustrated below using two cases.

A 54-year-old female on chemotherapy for metastatic breast cancer is brought in by paramedics with an altered level of consciousness. In your resuscitation room she is somnolent and can provide no meaningful history. She has a heart rate of 118, a blood pressure of 82/50 and a temperature of 37.7. There are no obvious findings on the physical exam. How would you further assess the patient?

The undifferentiated hypotensive patient is a common and potentially challenging presentation. In addition to traditional history and physical exam findings, PoCUS can be used to assist in determining the correct type and cause of shock. There are various published algorithms in the literature, such as the RUSH2 and the ACES3 protocols, that each include several standard ultrasound windows. But which views yield the greatest impact in a timely fashion? The IFEM paper outlines an approach that is intuitive and efficient.

In the context of this case, we have been presented with a picture of a specific clinical problem despite having a nonspecific presentation. These findings are consistent with non-cardiogenic shock: there’s nothing to suggest a massive PE or obstructive shock, the heart is filling and pumping effectively which rules out cardiogenic shock, and we can’t find a source of bleeding to account for hemorrhagic shock. In the context of a cancer patient with a poor immune response, they are likely septic and/or dehydrated. We can deal with this!

EMS rolls into your resuscitation room with a 48-year-old female who is receiving CPR. Over the commotion, the paramedic begins telling you the story. She was in the waiting room of a nearby walk-in clinic when she collapsed in front of several bystanders. She was pulseless and CPR was started immediately by clinic staff. An AED was retrieved and did not advise a shock. She has been in a PEA rhythm throughout and the paramedics have intubated and have been performing CPR for approximately 15 minutes.

You quickly run through your H’s and T’s of the ACLS algorithm, but nothing jumps out. Her blood sugar is 5.6 and there’s good air entry bilaterally. You wonder if ultrasound will be able to give you some clues.

The IFEM cardiac arrest protocol is fairly similar to the one for undifferentiated hypotension.

At this point you have ruled out many correctable causes of cardiac arrest, including pericardial tamponade. A massive pulmonary embolism is at the top of your differential. These ultrasound findings suggest that thrombolysis should be considered. While the focus of this case was to demonstrate the utility of ultrasound during cardiac arrest, it is important to emphasize that CPR is always the priority in these patients. Ultrasound scans should never result in additional interruptions in resuscitation.

Summary of Guidelines for SHoC

A large body of well-documented research forms the background leading to the development of these two protocols. They can help practitioners effectively diagnose some of the most difficult presentations in the ED!

So why do we need another ultrasound protocol in emergency medicine? RUSHing from the original FAST scan, playing the ACES, FOCUSing on the CAUSE and meeting our FATE, it may seem SHoCking that many of these scanning protocols are not based on disease incidence or data on their impact, but rather on expert opinion. The Sonography in Hypotension (SHoC) protocols were developed by an international group of critical care and emergency physicians, using a Delphi consensus process, based upon the actual incidence of sonographic pathology detected in previously published international prospective studies [Milne; Gaspari]. The protocols are formulated to help the clinician utilize ultrasound to confirm or exclude common causes, and guides them to consider core, supplementary and additional views, depending upon the likely cause specific to the case. Why would I take the time to scan the aorta of a 22 year old female with hypotension, when looking for pelvic free fluid might be more appropriate? Why would I not look for lung sliding, or B lines in a breathless shocked patient? Consideration of the shock category by addressing the “4 Fs” (fluid, form, function, and filling) will provide a sense of the best initial therapy and should help guide other investigations. Differentiating cardiogenic shock (a poorly contracting, enlarged heart, widespread lung B lines, and an engorged IVC) in an elderly hypotensive breathless patient, from sepsis (a vigorously contracting, normally sized or small heart, focal or no B lines, and an empty IVC) will change the initial resuscitation plan dramatically. Differentiating cardiac tamponade from tension pneumothorax in apparent obstructive shock or cardiac arrest will lead to dramatically differing interventions. SHoC guides the clinician towards the more likely positive findings found in hypotensive patients and during cardiac arrest, while providing flexibility to tailor other windows to the questions the clinician needs to answer. One side does not fit all. That is hardly SHoCing news. Prospective validation of ultrasound protocols is necessary, and I look forward to future analysis of the effectiveness of these protocols.

Atkinson PR, McAuley DJ, Kendall RJ, et al. Abdominal and Cardiac Evaluation with Sonography in Shock (ACES): an approach by emergency physicians for the use of ultrasound in patients with undifferentiated hypotension. Emerg Med J 2009;26:87–91

David Lussier is a third year emergency resident at the University of Manitoba. His professional interests include trauma and ultrasound. Outside of hospital he spends his time travelling and playing hockey.

Chau Pham is and emergency physician, EM Ultrasound Director, and the Program Coordinator of the High Performance Physician Program at the University of Manitoba