Is that pesky pacemaker still causing you trouble? It means well but sometimes it can rub emergency physicians the wrong way. Let’s shift our focus to the ECG, and hopefully we’ll discover some pearls to help us with these troublesome devices.

This is part 2 of a 3 part series. Check out part 1, “Pacemaker Essentials: What we need to know in the ED” if you haven’t already! If you’d like to download a personal version of the above infographic, click here.

It’s Saturday night and you are handed the following ECG. The patient is a 68-year-old male with chest pain. His past medical history is significant for a permanent pacemaker (PPM) that was placed for complete heart block three years ago. His vitals are stable. 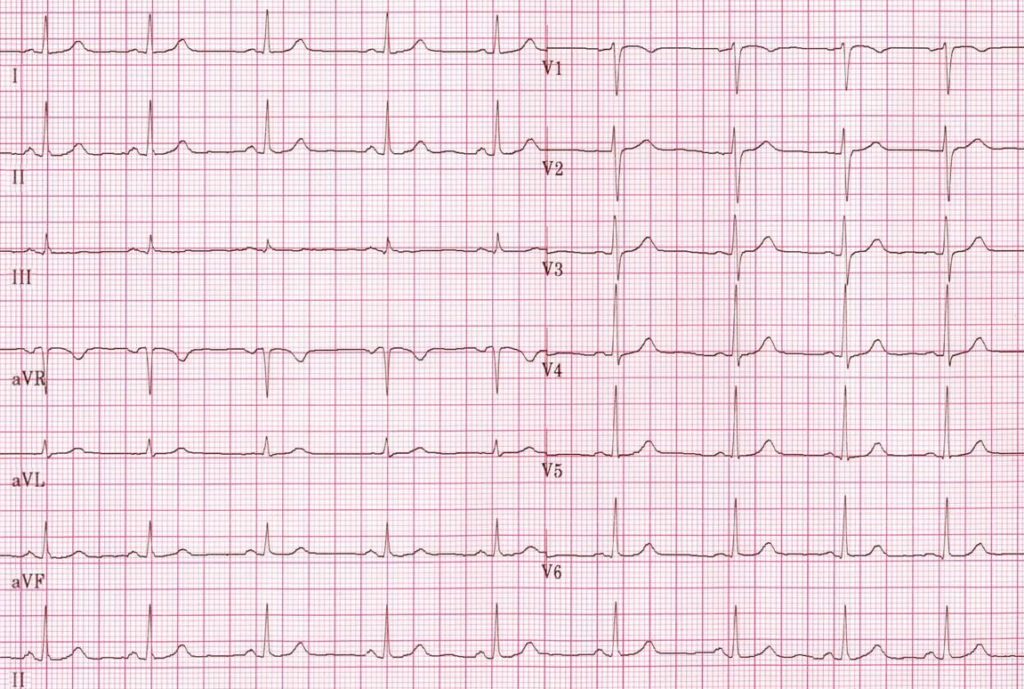 Does this person actually have a pacemaker?

He could. This ECG shows normal sinus rhythm, and this does not rule out the presence of a pacemaker. For example, a patient who has a pacemaker with a currently-appropriate native rhythm may have an ECG that looks like the one above. Since the native rhythm is currently normal, the pacemaker isn’t triggered, and instead sits back and senses the rhythm.

Approach to a Pacemaker ECG

A pacemaker consists of a box (i.e. the pacemaker or pulse generator) and a lead or leads. When it malfunctions, the issue is with rate, pacing, capturing (i.e. delivering the spike to depolarize the myocardium), or sensing [1].

It is important to go through a consistent approach when interpreting pacemaker ECGs, ideally the same one you use for non-paced ECGs. This way you won’t get distracted by a wide QRS following a pacing spike and miss something like ST elevation.

The purpose of the following steps is to provide the emergency physician with a simple way to approach pacemaker malfunction. An ECG is a helpful initial test in determining the cause of pacemaker malfunction. It is important to note that this diagnostic dilemma will often still require the help of our cardiology colleagues.

Now, here are 4 steps that you can add to your regular approach whenever you see a paced ECG. The 4 steps are summarized nicely into an algorithm in the above infographic.

STEP 1: Is the rate appropriate?

Okay, yes, this is part of our standard approach. Still, it can help us develop a differential diagnosis when we are dealing with potential pacemaker malfunction.

STEP 2: Is there a P wave or QRS complex following every pacer spike?

This is similar to looking for normal sinus rhythm. If you see a paced spike then you should see a P or QRS immediately following. This indicates that the atria or ventricle have been ‘captured’ and depolarization has occurred. In other words, it indicates that there is enough energy in the spike to overcome the stimulation threshold. If you don’t see activity that follows a paced spike then this is failure to capture (FTC)!

Figure 2. The last 2 pacing spikes do not result in depolarization of the myocardium. This is failure to capture (FTC).

STEP 3: Are there are pacer spikes seen throughout with no sinus pauses or asystole?

If the pacemaker is pacing properly, there should be no periods where you see a sinus pause or asystole. The pacemaker should provide an electrical impulse when a set time interval has been reached. If it does not, this is failure to pace (FTP)!

Figure 3. There is a long pause with no pacing spike delivered. This is failure to pace (FTP).

STEP 4: Are there pacing spikes where there shouldn’t be?

If your intrinsic cardiac rhythm is appropriate, your pacemaker should just sit back and relax. If you start seeing paced spikes during normal cardiac activity, this means the pacemaker isn’t sensing myocardial depolarization and thus is failing to sense (or under-sensing) the native rhythm!

Figure 4. Pacing spikes are seen despite normal electrical activity. This is failure to sense (FTS or under-sensing).

Sensing is the ability of the pacemaker to detect the heart’s intrinsic electrical activity. The lower the sensitivity setting, the more readily it will detect a subtle signal. In contrast, the higher the sensitivity setting, the less sensitive the pacemaker will be when detecting low amplitude electrical activity. A pacemaker should only recognize native activity in the chamber where the electrode is placed.

The pacemaker is over-sensing the rhythm. This means it incorrectly senses things other than a P or QRS and is being tricked into thinking the native rhythm is okay (e.g. seeing a T wave and thinking it is the QRS complex). As a result, it doesn’t fire a pacing spike when it should leading to FTP!

The pacemaker is under-sensing the rhythm. This means it is not sensing the native rhythm correctly and will kick in when it shouldn’t. It will pace inappropriately, and you may see spikes anywhere. This can be dangerous if you get an impulse on the tail end of a T wave, which can result in R on T phenomenon. R on T can cause ventricular tachycardia or Torsade de Pointes which we usually like to avoid.

*This table reflects common DDx. It is not an exhaustive list.

Most pacemaker malfunctions will require a cardiology consult for definitive management, but there are some exceptions. The previous pacemaker essentials post details management of pacemaker-mediated tachycardia and other tachyarrhythmias. Any time you are concerned for your patient with a malfunctioning pacemaker, it is reasonable to get your cardiology colleagues involved early. In cases of malfunction in an unstable or potentially-unstable patient, you can always try a magnet which should result in asynchronous pacing or use transcutaneous pacing until a transvenous wire is placed, depending on the issue.

What about the Sgarbossa Criteria?

LBBBs can make detecting ischemia tricky. We often apply the Sgarbossa criteria (3 or more points is concerning for myocardial infarction) in the presence of LBBB [3,4]. As previously mentioned, most of pacemaker leads will be in the RV and will have a LBBB appearance. Since this is the case, can’t we just use Sgarbossa if we’re concerned for MI in a pacemaker patient?

We can, but its use is quite limited. The Sgarbossa criteria were developed from the GUSTO-1 trial in 1996. Only 17 patients (0.1%) had a ventricular paced rhythm [3]. A retrospective study in 2010 looked at 57 patients who were ventricular paced and diagnosed with a MI. They found the discordant STE > 5mm to be the most useful criteria (specificity 99%, sensitivity 10%). They did not have any patients who had concordant STE > 1 mm and the criteria was not very helpful in those with STD > 1 mm in leads V1-3 (specificity 81%, sensitivity 19%) [4].

Thus, discordant STE > 5 mm is a good rule in test but its absence does not rule out ischemia!

The patient is now chest pain free. After you complete your full workup he is discharged home with chest pain NYD. But you’re still pretty happy since: You – 1, pacemaker – 0.

Some take away points:

Thanks for reading! If you found this useful, stay tuned for “Part 3: Okay enough on Pacemakers, let’s talk ICDs and CRT”.

The “Golden Rule” highlighted at the top of this infographic is the most important take home message. Taking a systematic approach to all ECGs will ensure that you don’t miss any key findings, whether or not the patient has a pacemaker.

This is a great infographic related to rhythm analysis on a paced ECG, providing the key features to look for as well as a differential diagnosis when the rhythm is abnormal. Future areas of exploration might include the approach to identifying ischemia on the ECG if the patient is paced, common issues related to pacemakers and how to address common issues in the ED.

Dr. Lorne Costello is an emergency physician at Sunnybrook Health Sciences Centre and Michael Garron Hospital and an assistant professor at the University of Toronto. He is interested in pacemakers (surprise), medical education and all things simulation.