A 62 year old woman presents to your Emergency Department with a chief complaint of severe right eye pain. Upon further questioning, she reveals reduced vision in the affected eye and colored halos around lights. She reports a diffuse headache and two episodes of vomiting. A quick physical exam reveals significant conjunctival injection and a fixed, mid-dilated pupil. Does your differential contain acute angle closure glaucoma?

What is Acute Angle Closure Glaucoma? 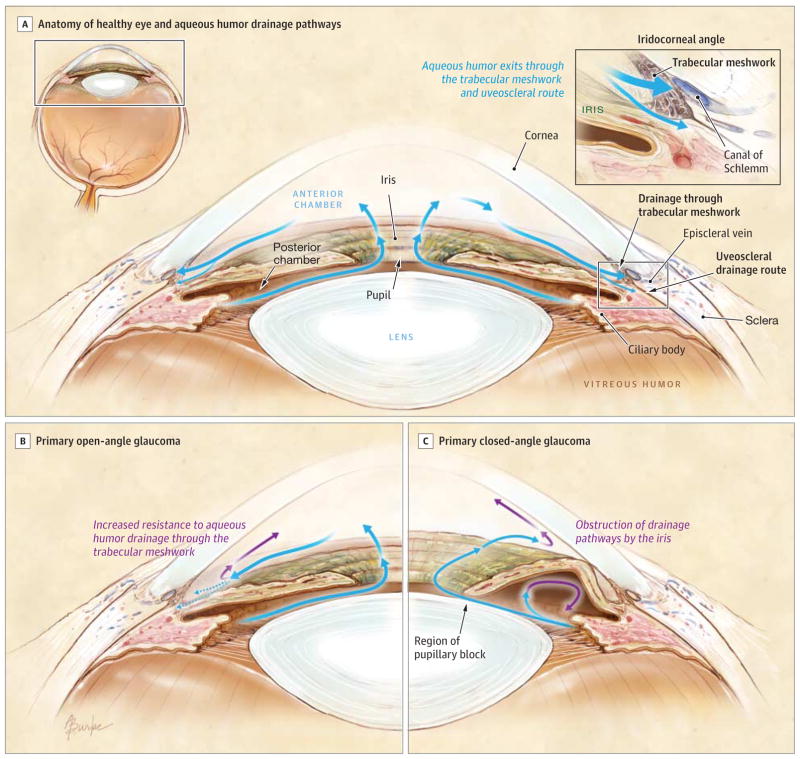 As a result of the associated systemic symptoms, acute angle closure glaucoma carries a significant risk of being incorrectly diagnosed. A thorough history and physical examination with documented raised intraocular pressure is imperative for diagnosis.

Patients with acute angle closure glaucoma present with abrupt onset of pain in the affected eye. In addition patients may present with blurred vision, frontal headache, nausea and vomiting, photophobia, and colored halos around lights.4 Nausea and vomiting occurs as a result of autonomic stimulation, while blurred vision and colored haloes are a result of corneal edema.5  The onset is often precipitated by dilation of the pupil. When the pupil is mid-dilated, the contact between the iris and the lens is maximal and the iris thickens, which worsens pupillary block.6 Patients often describe onset of ocular pain when transitioning from a light to dark environment. Medications that dilate the pupil have the potential to precipitate an attack; these include adrenergic agents, drugs with anticholingeric effects, sulfa-based drugs, tricyclic antidepressants, anticonvulsants, and antiparkinsonian drugs.7 Other risk factors for acute angle closure glaucoma include a family history of the condition, being of Asian descent, female gender, hyperopic eyes, eyes with shallow anterior chambers, thick lens, and narrow irido-corneal angles. 6  As people age, their anterior chamber becomes more shallow and the lens thickens and moves anteriorly, 5  which makes this condition rare below the age of forty, with the peak incidence occurring in the sixth and seventh decades of life.8

Patients with acute angle closure glaucoma present with conjunctival injection and a fixed, mid-dilated pupil measuring 5-6 mm in diameter.9 Due to the elevated intraocular pressure, the eye may feel hard to the touch. The visual acuity is often reduced. Raised intraocular pressure is necessary for the diagnosis of this condition, and is measured using a Tonopen. A pressure that exceeds 21 mmHg characterizes elevated intraocular pressure, however the pressure may exceed 60-80 mmHg. 2  Fundoscopic examination is often difficult due to the presence of corneal edema; however, one of the most notable features is a pale, cupped optic disc. Cupping occurs due to atrophy of the optic nerve fibers that results in the central cup of the optic nerve appearing enlarged. The normal cup-to-disc ratio is 0.3, but a patient with glaucoma will have a ratio of 0.6 or greater.10 Finally, a slit lamp examination is required for a complete eye examination in patients suspected of having acute angle closure glaucoma. Slit lamp examination will reveal a shallow anterior chamber and a cloudy cornea due to edema. 10  Gonioscopy, a procedure used to measure the depth of the anterior chamber, will be conducted by the Ophthalmologist.

Prompt treatment is required for this condition, as the increased intraocular pressure can lead to optic nerve damage and vision loss. Immediate consultation with an Ophthalmologist is required. Pharmacological treatment options include:

Given the potentially vision compromising nature of this condition, all of these medical treatments should be initiated upon diagnosis. Intraocular pressure should be reassessed hourly to monitor response to treatment. While these pharmacological agents are often effective at lowering the intraocular pressure, patients will often require more definitive management with laser treatment, or occasionally, surgical treatment.

Acute angle closure glaucoma is an important cause of headache in the adult, and can be missed if not included in your differential diagnosis. While some of the physical examination findings are admittedly difficult to appreciate, measurement of the patient’s IOP with the Tonopen is simple and essential to making the diagnosis. The pharmacologic treatments listed in the article can temporize the patient, especially if you are in a centre without quick access to an Ophthalmologist, however their administration should not delay transfer and definitive management. Acute angle-closure glaucoma is an ophthalmological emergency, and the most important thing you can do is to recognize it and arrange for emergent definitive management.

Stephanie Cargnelli is a Family Medicine resident at the University of Toronto with a special interest in Emergency Medicine. She enjoys teaching and has a passion for research. When she's not working, she can be found horseback riding and playing soccer.