This episode of CRACKCast covers Rosen’s Chapter 142 (9th Edition), Alcohol Related Disease. This chapter covers the spectrum of alcohol use, including effects of mild, moderate, and severe use disorders, including prevention, screening, diagnosis and management. We also examine the wide variety of complications associated with acute and chronic alcohol use.

Anyone who works in the ER knows well the epidemic extent of alcoholism. Alcohol is the most common recreational drug taken by Americans, and per capita consumption is increasing. Alcohol is the third leading cause of preventable death in the United States; alcoholism permeates all levels of society and is a preventable cause of morbidity and mortality.

[1] Describe the alcohol pathway of metabolism. What order kinetics are involved?

The absorption and elimination rates of alcohol vary by individual and depend on many factors—diet, gender, body weight and habitus, speed of consumption, gastric motility, presence of food in the stomach, smoking history, age, whether the person is a chronic alcohol consumer with enzyme induction and high-activity MEOS, advanced cirrhosis, presence of ascites, and state of nourishment. The rate of ETOH elimination varies, but in general (assuming zero order kinetics) is from 2-8 mmol/L/hr .

The exact physiologic effects of different levels are UNPREDICTABLE, some people are intolerant of levels as low as 5 mmol/L; a level of 32 mmol/L is where 50% of the adult population will be obviously intoxicated. Chronic alcoholics are tolerant of much higher levels.

[2] Define substance dependence. What are the signs of dependence?

This is a misleading question, because some of the current terminology has shifted based on the DSM-V. Replacing the two DSM-IV diagnoses of substance abuse and dependence is a single diagnosis, SUD, named by the type of substance involved (eg, alcohol use disorder or cannabis use disorder) and a specifier indicating severity (mild, mod, severe).

— DSM-5 diagnostic criteria for SUD are described below .

A problematic pattern of use leading to clinically significant impairment or distress is manifested by two or more of the following within a 12-month period:

Preoccupation with use is often demonstrated by giving up previously important activities, increasing the time spent in activities related to substance use, and using more frequently or for longer amounts of time than planned. Consumption may continue despite the continued existence or worsening of problems caused by substance use. In applying criteria on consequences and behaviors associated with use, it is important to include alcohol-related blackouts, and impulsive sexual behavior.

Severity — Alcohol and drug symptom profiles appear to vary along a severity dimension. DSM-5 severity specifiers mild, moderate, and severe are based on the number of diagnostic criteria met by the patient at the time of diagnosis:

Healthcare coding and billing in the United States is based on the International Classification of Diseases (ICD). DSM-5 and ICD criteria for a substance use disorder are very similar, but ICD require a minimum of three criteria instead of two. The ICD diagnoses of “harmful use” require only substance related physical or psychological harm.

Alcohol use disorder in DSM-5 replaces two psychiatric disorders in DSM-IV, alcohol abuse and alcohol dependence. Alcohol use disorder can be specified as mild, moderate, or severe (6 or more symptoms present), based on the number of DSM-5 criteria present.

DSM-5 diagnostic criteria for alcohol use disorder are:

-The above compiled from Uptodate 2018

Some sources confirm that 25-30% patients visiting the ER meet the criteria for at risk drinking. The CAGE questionnaire is designed to assess for LIFETIME ETOH dependence and is no longer recommended as a screening tool because it is geared towards the DSM-IV diagnoses of substance abuse and dependence; plus it is not as sensitive for detecting the full spectrum of unhealthy use. However, the Alcohol Use Disorders Identification Test (AUDIT)-C is best used for primary care settings.

AUD consist of alcohol dependence, alcohol abuse, or harmful use. These disorders are common in all developed countries and are more prevalent in men than in women, with lower but still substantial rates in developing countries.

However, most people with AUD are difficult to identify because they are likely to have jobs and families and to present with general complaints, such as malaise, insomnia, anxiety, sadness, or a range of medical problems.

In response to the high prevalence of this disease, the American Medical Association has recommended screening patients for alcohol use problems in medical and surgical settings and EDs.

AUDIT-C — The AUDIT-C is a screening test comprised of three items on excess consumption from the Alcohol Use Disorders Identification Test (AUDIT). The questions, below, have been validated primarily in male veterans but studies demonstrating validity in primary care and other populations are beginning to appear. The AUDIT-C is briefer than the original test, but still requires scoring.

Although the AUDIT-C contains no items specific to disorders, the score is associated with severity; a score of 7 to 10 or greater suggests dependence

The goal of this test is identify people who are drinking hazardous amounts!

Alcohol contributes to 79,000 deaths and $223.5 billion in societal costs annually in the United States. Harmful consequences and risk of disability exist on a continuum.

At-risk drinking is defined as heavy or problematic alcohol use that may lead to an array of negative consequences, including social, physical, psychological, legal, and financial problems.

The National Institute on Alcohol Abuse and Alcoholism (NIAAA) in the United States has estimated consumption amounts of alcohol that increase health risks:

Specifying these thresholds is an inexact science based on epidemiological evidence. Amounts are based on a “standard drink,” which is defined as 12 grams of ethanol, 5 ounces of wine, 12 ounces of beer, or 1.5 ounces of 80 proof spirits. The number and size of drinks that define risky amounts varies internationally. – Uptodate

Acute intoxication of any substance during the withdrawal period:

Gamma-aminobutyric acid — Gamma-aminobutyric acid (GABA) is the major inhibitory neurotransmitter in the brain. Highly specific binding sites for ethanol are found on the GABA receptor complex. Chronic ethanol use induces an insensitivity to GABA such that more inhibitor is required to maintain a constant inhibitory tone. As alcohol tolerance develops, the individual retains arousal at alcohol concentrations which would normally produce lethargy or even coma in relatively alcohol naïve individuals. Cessation of alcohol or a reduction from chronically elevated concentrations results in decreased inhibitory tone.

Excitatory amino acids — Glutamate is one of the major excitatory amino acids. When glutamate binds to the N-methyl-D-aspartate (NMDA) receptor, calcium influx leads to neuronal excitation by binding to the glycine receptor on the NMDA complex. Ethanol inhibits glutamate induced excitation. Adaptation occurs by increasing the number of glutamate receptors in an attempt to maintain a normal state of arousal. Cessation of alcohol or a reduction from chronically elevated concentrations results in unregulated excess excitation. – Uptodate

Alcohol withdrawal remains a clinical diagnosis. It may be necessary to perform extensive testing, including lumbar puncture and cranial CT, to rule out other diagnostic considerations with confidence. This is particularly true when the presentation includes altered mental status and fever.

Patients should be placed in a quiet, protective environment. Mechanical restraint may be necessary temporarily for patients suffering from delirium tremens (DT) in order to protect both the patient and caretakers.

[9] List the ways that alcohol precipitates or is related to seizures. List a differential for alcohol withdrawal seizures.

We already know that the abrupt withdrawal of ETOH leads to an imbalance of glutamate in the CNS. But there are at least 6 ways that ETOH may act to produce seizures:

In general: only supportive care!

Withdrawal-associated seizures are generalized tonic-clonic convulsions that usually occur within 12 to 48 hours after the last alcoholic drink, but may occur after only two hours of abstinence. The seizures occur predominantly in patients with a long history of chronic alcoholism, as evidenced by their typical onset during the fourth and fifth decades of life.

****Withdrawal seizures are usually singular or occur as a brief flurry of seizures over a short period. Recurrent or prolonged seizures or status epilepticus are not consistent with withdrawal-associated seizures and should prompt an investigation into possible structural or infectious etiologies, generally guided by the findings of cranial computed tomography (CT) and/or lumbar puncture. ******

Benzodiazepines, phenobarbital, and propofol can be used to treat status epilepticus while investigations proceed. Several studies have demonstrated that phenytoin is ineffective in the treatment of alcohol withdrawal seizures and the drug should not be used for this purpose. Although seemingly benign, alcohol withdrawal seizures left untreated progress to delirium tremens in nearly one-third of patients

[11] Describe the pathogenesis and treatment of alcoholic ketoacidosis.

There are three ketone bodies 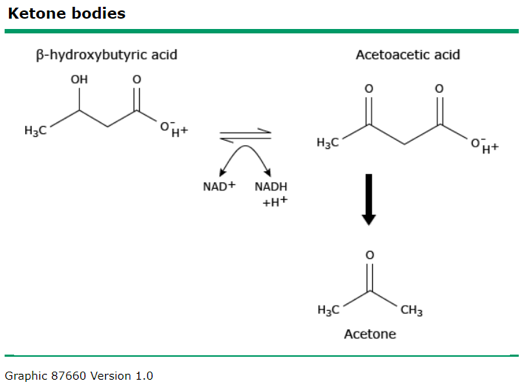 All three of these classic symptoms are present in only one-third of patients. Any one of these, most often encephalopathy, may be seen in isolation. WE should be considered when one or more occur in at-risk patients. There is no diagnostic test that confirms the diagnosis, so whenever you suspect it, give thiamine!

A suggested treatment regimen is 500 mg intravenous (IV), infused over 30 minutes, repeated three times daily for two consecutive days and 250 mg IV or IM once daily for an additional five days. Oral thiamine and multivitamin supplementation are recommended thereafter as long as the patient remains at risk.

Korsakoff amnestic syndrome is the CHRONIC form of thiamine deficiency.

Thiamine, vitamin B12, amino acids, folic acid, and glucose have impaired absorption in alcoholics. Dietary deficiencies in folic acid and protein, pancreatic insufficiency, abnormal biliary secretion, and direct toxic effects of ethanol on the GI tract contribute to malabsorption. Abstinence and adequate nutrition reverse the diarrhea and much of the malabsorption.

This post was copy-edited and uploaded by Andrew Guy.