This episode of CRACKCast covers Rosen’s Chapter 149, Aspirin and Nonsteroidal agents. You will become well-versed in the presentation of Salicylism and how to manage it. The episode also touches on NSAID overdose, with rare severe complications.

Aspirin, or acetylsalicylic acid, is widely consumed for its analgesic, anti-inflammatory, and antiplatelet effects… however salicylate toxicity is not a benign condition and causes a complex set of life-threatening metabolic derangements with significant morbidity and mortality.

20-30 people die every year from ASA overdoses. The very young and very old are at particular risk!

It’s not just ASA that we worry about: other potential sources of salicylate toxicity include;

***Ingestion of oil of wintergreen is of particular concern given that 1 mL of 98% solution contains the equivalent salicylate of 1.4 grams of aspirin (this is one of those “one sip can kill” drugs).***

[1] What is the pathophysiology of ASA toxicity?

Ingestions of >500 mg/kg are associated with death.

Fatal salicylate intoxication can occur after the ingestion of 10 to 30 g by adults and as little as 3 g by children.

[3] How is Aspirin eliminated from the body?

ASA can reversibly bind to albumin, but free salicylate is eliminated by renal excretion. 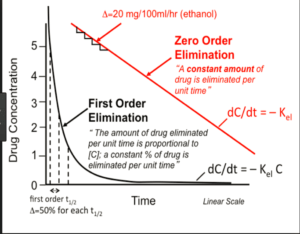 [4] Describe the clinical presentation of ASA toxicity. Describe the acid base disturbance and progression of toxicity in acute salicylate overdose.

Refer to Box 144.1 in Rosen’s 9th edition for a handy table that describes the acid base disturbance and progression of toxicity in acute salicylate overdose.

[5] How is ASA toxicity managed?

In all cases of altered mental status, even in the face of a normal serum glucose measurement, supplemental intravenous (IV) glucose (0.5-1 g/kg) should be administered.

Refer to Box 144.2 in Rosen’s 9th edition for the detailed treatment of acute salicylate poisoning. A brief overview of the table is provided below.

Pearls & Pitfalls as per emDOCS

[6] When is dialysis indicated in patients with ASA toxicity (list at least 6)?

[7] Which types of NSAIDS are more toxic?

[8] How does NSAID toxicity manifest?

Most NSAID overdoses are asymptomatic or cause only minor symptoms.

Renal dysfunction is seen only after large acute overdose and in association with a period of relative hypovolemia with hypotension. It is reversible and usually responds to supportive measures.

Ibuprofen is the most common NSAID ingested in overdose and most cases follow a benign, self-limited course. Symptomatic overdose occurs only after ingestion of at least 100 mg/kg, and symptoms develop within 4 hours of ingestion. Life-threatening toxicity is rare with most cases limited to mild GI disturbance that resolves in hours.

Decontamination: There is no evidence supporting the use of gastric emptying or AC in NSAID overdoses.

Enhanced Elimination: because of high protein binding and rapid metabolism, enhanced elimination is not useful in most cases. In the rare case of a massive overdose with pH <7.1, hemodialysis should be considered to correct acidemia. In this situation, hemodialysis may also remove the free drug once protein binding is overwhelmed. Plasmapheresis has been attempted in severe phenylbutazone poisoning.

Antidote Therapy: there is no specific antidote for NSAID poisoning.

1) When are peak levels of ASA expected post-ingestion?

Salts of salicylic acid are rapidly absorbed intact from the gastrointestinal (GI) tract, with appreciable serum concentrations occurring within 30 minutes of ingestion of a therapeutic dose and peak levels in 2 to 4 hours. Large ingestions frequently delay gastric emptying. In addition, aspirin, particularly enteric-coated preparations, tend to form concretions in the stomach. These properties often result in prolonged absorption with rising serum levels for 12 hours or more. So make sure you draw serial levels – because ASA has a stuttering absorption profile for many hours (sometimes past 12 hours!)

2) What sequential acid-base abnormalities are expected? Why does each happen?

a) How does this change in pediatrics?

3) List 4 causes of induction of Hypokalemia in ASA toxicity.

PLUS: Inhibition of the active transport system, secondary to uncoupling of oxidative phosphorylation

4) What is the primary cause of mortality in ASA toxicity?

Primary cause of mortality = cerebral toxicity and metabolic acidosis

Mechanism: occurs through uncoupling of oxidative phosphorylation, and neuro/nephro/pulmonary toxicity.

***Note on the elderly patient:

Chronic poisoning may be much subtler, manifesting as a waxing and waning combination of the above features of toxicity***

***Salicylism mimics sepsis, CNS infection, withdrawal syndromes, and alcoholic or diabetic ketoacidosis. This is especially true in chronic toxicity given that the serum salicylate concentration is relatively low.

6) How can ASA be effectively GI-decontaminated?

Activated charcoal (AC) has been shown to reduce salicylate absorption in both animal studies and human volunteer trials. Evidence in overdose is less clear.

Because salicylates have a low pKa and are renally excreted, alkaline urine traps the salicylate ion and increases excretion.

Salicylates are acidic compounds and therefore readily ionize in an alkali environment. Only in the non-ionized state can they traverse cell membranes. Thus, once ionized in the urine, they are effectively “trapped” and can be easily excreted.

8) Describe why intubating the ASA toxic patient is dangerous

Unless the patient is decompensating, early mechanical ventilation should be avoided.

“Similar to diabetic ketoacidosis, it is difficult to artificially achieve adequate minute ventilation that sufficiently matches the patient’s own respiratory compensation. In addition, the loss of ventilation during the intubation results in rapid loss of respiratory compensation and worsening acidemia. If the patient is sufficiently critically ill to require intubation, worsening of acidosis during apnea is potentially harmful. Thus, we recommend administration of 50-100 mEq (1-2 amps) of sodium bicarbonate (NaHCO3) immediately prior to the procedure irrespective of the serum pH. Attempt to adjust the tidal volume post-intubation to match the pre-intubation PCO2 level. In addition, establish an elevated minute volume and obtain frequent blood gases to guide ventilator management to maintain respiratory compensation.” – Rosen’s

The Poison Review summed it up best with the following:

This post was uploaded and copyedited by Samuel Hogman