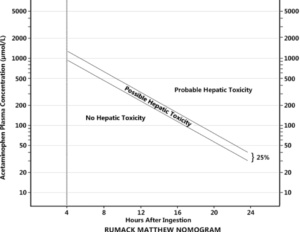 [1]  Describe the metabolism of acetaminophen

[2]  Describe the 4 stages of acetaminophen toxicity

[4] When do you start NAC in acute ingestion?

[5] When do you start NAC in chronic ingestion?

But when is it useful to check a APAP level in chronic ingestion? See table 143.2

**** Note: Those individuals who are at increased risk for hepatocellular toxicity from chronic ingestion:

[6] What are the common reactions to the PO and IV NAC? How are these managed?

As seen on LITFL: 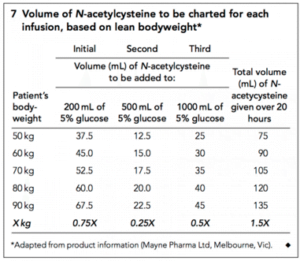 [8] When can you stop NAC therapy?

As seen on LITFL:

***Note: NAC can mildly elevate the INR to 1.3 – if stable this is not the start of hepatic failure***

[9] Describe criteria for transfer to a transplant centre

[1] What are the contraindications to using the Rumack-Matthew nomogram?

“Several reports have described patients with a massive acetaminophen overdose (>50 g) who developed hepatic failure despite early treatment with intravenous N-acetylcysteine using the standard 20 hour protocol. A retrospective study of patients hospitalized for treatment of acute APAP overdose reported that the proportion of patients who developed liver injury increased as acetaminophen concentrations increased, even when treatment with N-acetylcysteine was initiated within 8 hours. These observations have led some authors to suggest that a higher dose of N-acetylcysteine may be required for large overdoses, and a computerized simulation of overdose supports this concept. However, there are no controlled studies demonstrating that increasing the dose of acetylcysteine prevents liver injury following massive overdose.”

[3] How does co-ingestion of diphenhydramine (Benadryl) impact Tylenol OD?

As discussed multiple times, co-ingestion with anticholinergics will impact gut motility, and can impact both your absorption times (i.e. interfering with nomogram interpretation) and may be associated with ongoing hepatocellular toxicity despite NAC 20hr IV protocol:

“There are reports of adult patients with massive acetaminophen ingestion (ingestion >30 g, or serum concentration >500 mg/L [3300 μmol/L]) who develop liver injury despite early administration of N-acetylcysteine. Several of these cases involved coingestion of diphenhydramine and the patients had elevated acetaminophen concentrations at the completion of the 20 hour intravenous N-acetylcysteine protocol. Pharmacokinetic models suggest that a higher dose of N-acetylcysteine for a longer period of time may be beneficial in such cases. Patients with these clinical features should be discussed with a poison center or toxicologist familiar with the management of acetaminophen overdose.” -uptodate

[4] What are the indications for dialysis in acetaminophen overdose?

This post was uploaded and copyedited by Kevin Lam (@KevinHLam)