This episode of CRACKCast covers Rosen’s Chapter 62, Venomous Animal Injuries. This presentation will be highly variable depending on where you practice, and this episode will equip you with tools to approach these cases as they arise.

Before we dive into Rosens, I just wanted to note for our international listeners that our focus here is primarily on North American envenomations, as logistically it would be impossible to cover the breadth of envenomations local to high risk areas such as southeast Asia, Brazil, Africa and Australia. This chapter may leave you want for more; you’ve been warned! For our North-North American listeners, enjoy the ride – the vast majority of these species are endemic to our warmer southern cousins. Enjoy. 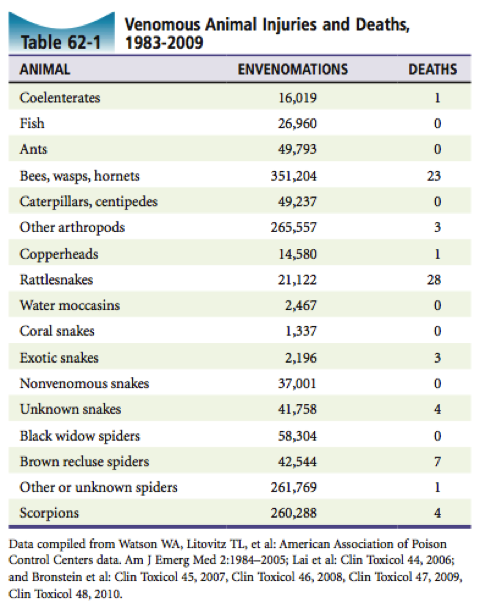 In the States they receive about 45000 snakebites / year, with a mortality rate of less than 0.02%. Fatality rates across the US are highest from bees, followed by rattlesnakes, wasps and spiders, although morbidity and mortality is growing in the field of ‘exotic snake’ exposure, which is particularly dangerous as antivenin is usually only available to the endemic areas of the imported creatures.

As a category – Hymenoptera (wasps, bees, yellow jackets, hornets and ants) are the most dangerous venomous animals – due to anaphylactic reactions to their venom. Additionally, marine envenomations are on the rise as outdoor recreations rises. All in all, the highest risk group remains very young, elderly, or inappropriately treated patients.

Some pedantry to chew on here; poisonous and venomous animals differ. Poison refers to toxins distributed in the tissue (ie pufferfish), which can cause harm after ingestion. Venom refers to specific glands and apparatus for deliver of toxin.

The composition of venom is complex: polypeptides, phospholipase A, enzymes, proteins, etc. Occasionally snakes can inject little or no venom (a “dry” bite).

Only 10% of snakes are venomous. Those classes are:

These are the most prevalent native venomous snakes in the USA – accounting for 98% of all envenomations.

They have 3 main groups: true rattlesnakes, copperheads & water moccasins, and pygmy rattlesnakes. All these fall into the Crotalidae family.

“Ask for a smile on the heat-seeking missile, or don’t put your foot in the pit”– Chris’ tip

These are found in North and South Carolina, Florida, Louisiana, Mississippi, Georgia, and Texas. This is the “deadly” eastern coral snake we’re talking about! IT has a black nose.

[4] List the grades of pit viper envenomation and indicate therapy.

Illegitimate vs. Legitimate (accidental) envenomation – not so useful to us. Maybe for insurance companies…

Out of hospital care: All snake-bites are an emergency. The initial 6-8 hrs are critical to prevent severe envenomation.

1) Remove victim from the snake (kill it if needed!) – and bring the dead snake with you if possible (or take some good pictures).

3) Remove clothing, jewellery around the bite,

4) Slow the spread of venom by helping the patient calm down, avoid movement of the bitten area (splint it), stop drinking alcohol (!),

Bring to a hospital ASAP! 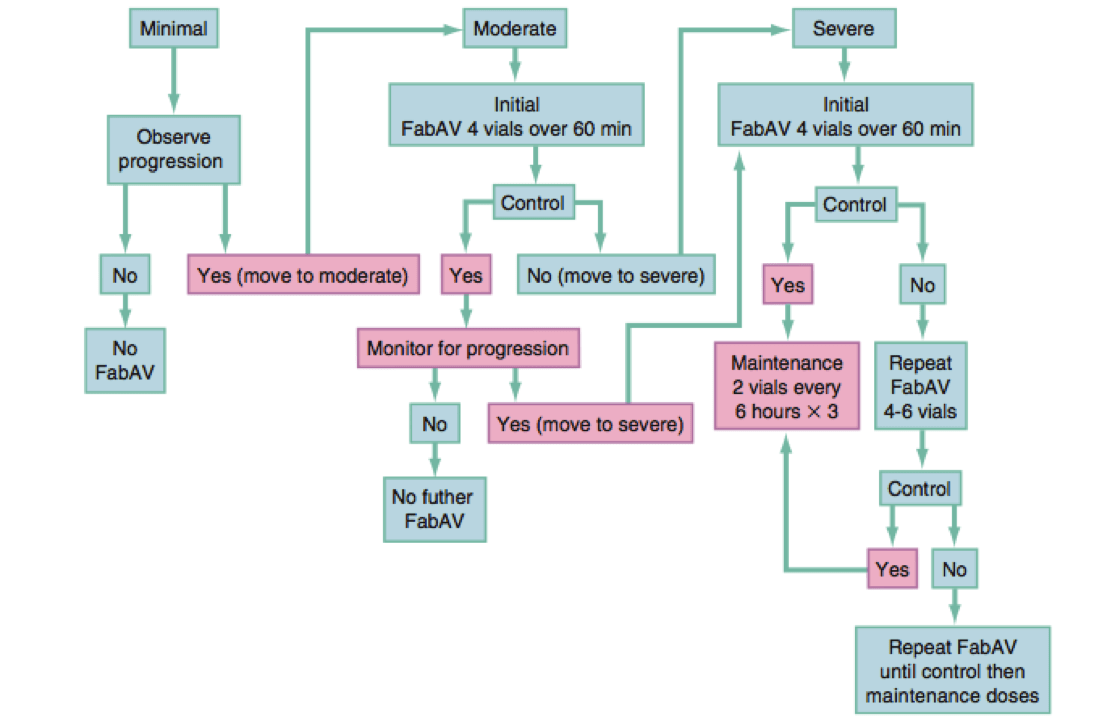 This common North American spider Latrodectus mactans, can be identified by the glossy black color and bright red marking on the abdomen – either an hour glass or two red spots. Fortunately only half the population, namely females, are able to envenomate humans. These species frequently take cover in protected placed such as rocks, woodpiles, stables and… outhouses… ouch!

Envenomation causes dull crampy pain in the bite, with spread to the rest of the body over the next hour. The abdomen may become board like with minimal tenderness. Pregnant women may go into premature labour. Other symptoms include dizziness, restlessness, ptosis, N/V, pruritus, dyspnea, and well… just about anything! ECG may indicate dig toxicity like changes.
Management initially is cleaning with soap, water, and tetanus. Patients with symptoms should have lab work including: CBC, lytes, BUN, Creatinine, Coags, UA, and ECG. Treatment includes diazepam for muscle spasms, parenteral analgesics for pain and admission for monitoring. Young, elderly and pregnant patients should prompt consider for antivenin Lyovac – a horse serum derivative. Hard criteria for antivenin include seizures, respiratory failure, uncontrolled HTN, pregnancy, and lack of response to prior therapies. Dose is one vial in 50ml NS over 15 minutes. Allergic reactions are common.

One-inch long spiders again found in protected areas such as woodpiles and rocks. More common is south-central US, but report as far as the Canadian border. Distinguishing features include a violin shaped darker area on the cephalothorax and three pairs of eyes instead of four… if you’re getting THAT close though, you’re asking for trouble. Images below from Wikipedia.

The toxin causes local tissue damage and hemolysis, and system symptoms are primarily allergic. Pain usually develops over 3-4 hours with a white area of vasoconstriction surrounding a bleb. This bleb eventually undergoes necrosis, and may resemble a MRSA infection.

Treatment is primarily supportive, but dapsone (an antibiotic known better for leprosy and PJP Pneumonia) 50-200mg/d can be considered for prevention of local effects if used within 48 hours. Analgesics are universally recommended. Signs of systemic envenomation require admission for observation. Antivenin is available in South America, but not commonly in North America.

[7] List 3 classes of venomous marine injuries, and describe key principles of management for each?

[1] What does expert opinion suggest to avoid anaphylaxis in non-recombinant anti-venin administration?

[2] What is the most poisonous animal?

Trick question! Or rather, we’ve been talking about VENOM until now. It would seem the likely candidate for most poisonous animal is the poison dart frog, which requires only 2 micrograms of toxin to kill a human adult. As for the world most dangerous venomous animal? This prestigious award likely goes to the box jellyfish, which has, by some sources, caused at least 5,567 recorded deaths since 1954. Although, most of these are due to drowning…. I still wouldn’t want a chance encounter! Images below from Wikipedia.

[3] What are the general phenotypic features of poisonous snakes in North America?

Triangle shaped head v. Round, Elliptical pupil v. round. Fangs and pit vs. none, and a single row of caudal plates +/- rattle v. double row of subcaudal plates. Now this is just a guideline, so don’t use it as a guide for which snakes are all cuddle and safe for pickup! This also only applies to North American snakes. See figure 62-1 for an illustration. 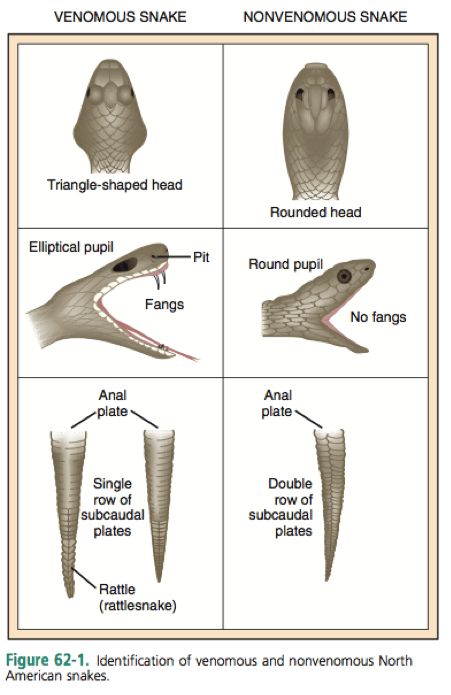 [4] What about coral snakes and Exotic envenomations?

These can all present with delayed and atypical neurologic symptoms (bulbar, ptosis, brainstem dysfunction, etc.) and should be admitted to hospital.

This episode was uploaded and copyedited by Riley Golby (@RileyJGolby)