Traditionally, the terminology describing drowning injuries has been confusing and impractical.

In the past, drowning referred to death within 24 hours of suffocation from submersion in a liquid, whereas near-drowning described victims who survived at least 24 hours past the initial event regardless of the outcome.

Thankfully, in 2005 the World Health Organization (WHO) published a new policy defining drowning to clarify documentation and to better track drowning injuries worldwide. Drowning was defined as “the process of experiencing respiratory impairment from submersion/immersion in liquid.”

Since that time, working groups have developed Utstein definitions to promote consistent international reporting and research.

Furthermore, the WHO policy states, “Drowning outcomes should be classified as: death, morbidity, and no morbidity; the terms wet, dry, active, passive, silent, and secondary drowning should no longer be used.” The term near-drowning should not be used, and the association of the term drowning with a fatal outcome should be abandoned.

According to the Utstein guidelines, drowning refers to: “A process resulting in primary respiratory impairment from submersion or immersion in a liquid medium”

Apparently 40 people die per hour from drowning – most are children less than 5 years old.

Break it down into:

Neurologically intact survival is reported for individual patients even with several of these factors present; none of several proposed scoring systems using combinations of these variables has 100% predictive power. Children who present with an abnormal head computed tomography (CT) scan (eg, intracranial bleed, cerebral edema) within the first 24 hours have a nearly 100% mortality rate. Furthermore, an abnormal head CT scan at any time is associated with poor outcome (death or persistent vegetative state).

Adverse neurologic findings on initial presentation do not preclude full neurologic recovery, although in general, patients whose duration of submersion or resuscitation exceeds 10 minutes have an unfavorable outcome.

Unfortunately, in reality we never really know these details accurately when that resuscitation rolls through the doors…

The diving reflex may also play a protective role in infant and child submersions. Activation of the diving reflex by fear or immersion of the face in cold water shunts blood centrally to the heart and brain. Apnea and bradycardia ensue, prolonging the duration of submersion tolerated without central nervous system (CNS) damage. The proposed protective effect of cold water immersion was unfortunately not seen in a study of 1094 drowning victims of all ages, where water temperature had no correlation.

[4] Describe the management of a drowning patient with respiratory distress

…if you’re on scene proceed with wilderness medicine principles* then initiate basic life support (get out of the water, start CPR when on a solid surface, only immobilize C-spines if: fall from a height, diving into shallow water, signs of trauma, motorized vehicle collision)

Assuming you’re in the hospital:

If you have time – brief your team on what you know

If you have time:

Consider what precipitated this drowning:

Note what is NOT above (i.e. no evidence for it!)

Victims with CNS injury may present with symptoms ranging from mild lethargy to coma with fixed and dilated pupils. CNS injury results from the initial hypoxic or ischemic insult and from the cascade of reperfusion injury that follows reestablishment of cerebral blood flow after an arrest. The release of inflammatory mediators and the generation of oxygen free radicals in the post resuscitation period contribute to cytotoxic cerebral edema, compromise of the blood-brain barrier, and increased intracranial pressure.

Cardiac dysrhythmias may incite drowning or develop as its consequence. Hypoxemia, acidosis, and, potentially, hypothermia are the primary factors responsible for dysrhythmias ranging from ventricular tachycardia and fibrillation to bradycardia asystole.

Electrolyte disturbances are rarely significant enough to be dysrhythmogenic.

Other clinical sequelae of drowning may include acute renal impairment, which is present on admission in approximately 50% of patients as the result of lactic acidosis; prolonged  hypoperfusion; and, in some instances, rhabdomyolysis. Coagulopathy as a consequence of associated hypothermia or disseminated intravascular coagulation (DIC) may also occur. 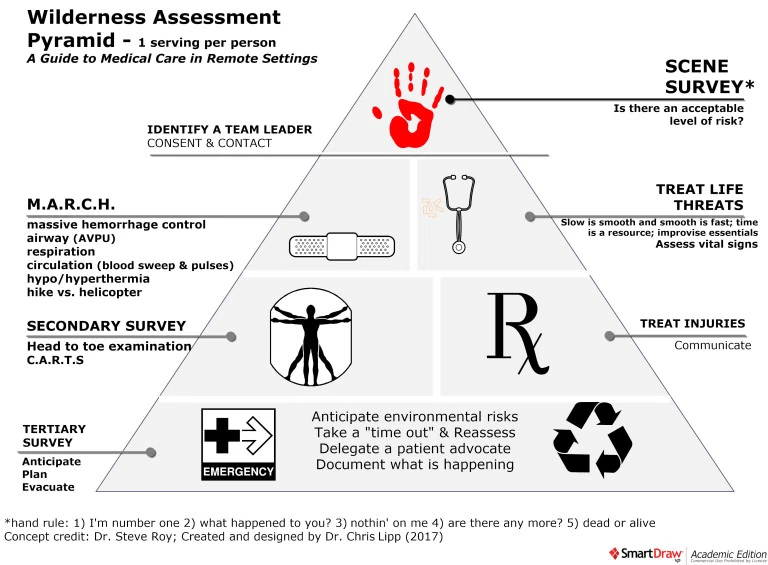 5) Discuss the indications for rewarming the drowning patient.  To what temperature do we warm to?

No consensus exists with regard to the appropriate length of resuscitative effort for hypothermic drowning victims in the ED.

The safest parameter is to continue until the core temperature reaches at least 32°C to 35°C, because cerebral death cannot be diagnosed accurately in hypothermic patients with temperatures below this level. This parameter may not always be practical, however, because brain-dead patients are often poikilothermic.

[6] What are late complications of drowning?

[1] What is immersion syndrome?

Immersion syndrome refers specifically to syncope resulting from cardiac dysrhythmias on sudden contact with water that is at least 5°C lower than body temperature. The risk is proportional to the difference between body temperature and water temperature.

Wetting of the face and head before entrance into the water may prevent the inciting sequence of events. Mechanisms for the syndrome are vagal stimulation leading to

asystole and ventricular fibrillation secondary to QT prolongation after a massive release of catecholamines on contact with cold water. The resultant loss of consciousness leads to secondary drowning.

Undetected primary cardiac arrhythmia (may be a more common cause of drowning than generally appreciated). As an example, cold water immersion and exercise can cause fatal arrhythmias in patients with the congenital long QT syndrome type 1. Similarly, mutations in the cardiac ryanodine receptor (RyR)-2 gene, which is associated with familial polymorphic VT in the absence of structural heart disease or QT prolongation, have been identified in some individuals with unexplained drowning. – Uptodate