This episode of CRACKCast covers Rosen’s Chapter 101, Stroke. This chapter covers the common presentations of various types of stroke, keys to recognition, and key tenets of management in the ED including addressing the indications and contraindications for thrombolysis.

Yes, it’s here. The episode we all feared…Let’s jump into this content. You know, we do heavy topics on CRACKCast, here’s another heavy weight…

“Stroke can be defined as any vascular injury that reduces cerebral blood flow (CBF) to a specific region of the brain, retina, or spinal cord, causing neurologic impairment. The onset of symptoms may be sudden or stuttering, often with transient or permanent loss of neurologic function.”

The brain needs oxygen and glucose and when a stroke occurs that fine balance is immediately altered. If there is a small amount of blood flow to an area of the brain we get “electrical silence” of the tissues, but if the flow is totally cut off beyond the “point of no return” membrane failure occurs with complete cell death. This process occurs with ischemia, or in intracranial haemorrhage (ICH) where the mass effect causes damage along with the subsequent cascade of inflammation and edema.

The big picture of current therapies are:

1) List 10 conditions on the differential diagnosis for ischemic stroke.

3) Describe the expected findings in the following stroke syndromes:

Although the posterior circulation is smaller and usually supplies only 20% of the brain, it supplies the brainstem (which is critical for normal consciousness, movement, and sensation), cerebellum, thalamus, auditory and vestibular centers of the ear, medial temporal lobe, and visual occipital cortex. The posterior circulation is derived from the two vertebral arteries that ascend through the transverse processes of the cervical vertebrae. The vertebral arteries enter the cranium through the foramen magnum and supply the cerebellum by the posterior inferior cerebellar arteries. They join to form the basilar artery, which branches to form the posterior cerebral arteries. 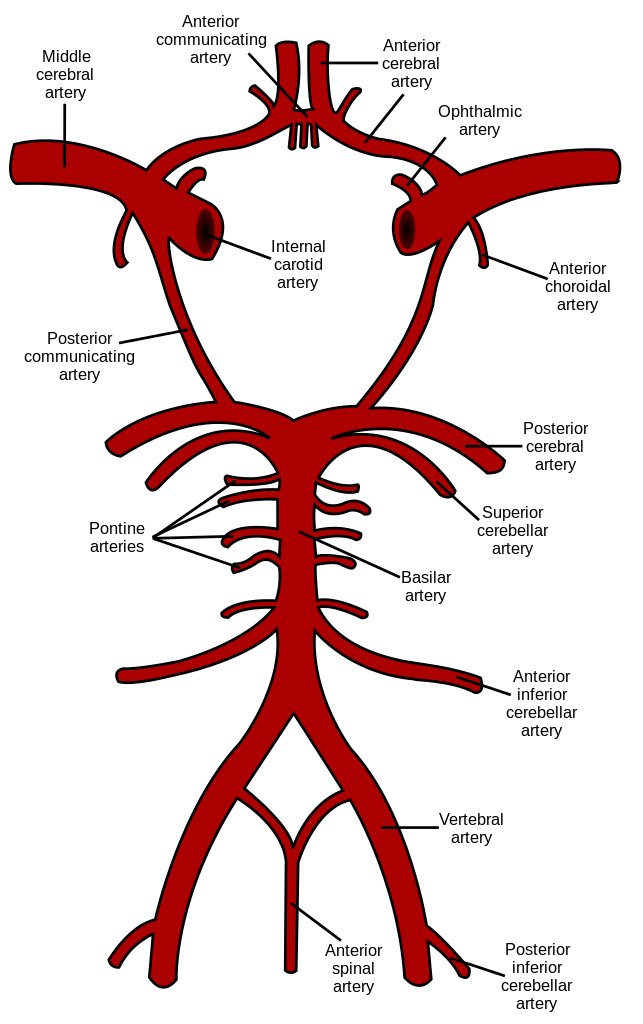 Occlusions in the anterior cerebral artery mainly affect frontal lobe function. The patient has altered mentation coupled with impaired judgment and insight, as well as the presence of primitive grasp and suck reflexes on physical examination. Bowel and bladder incontinence may be features of anterior cerebral artery stroke. Paralysis and hypesthesia of the lower limb opposite the side of the lesion are characteristic. Leg weakness is more pronounced than arm weakness in anterior cerebral distribution stroke. Apraxia or clumsiness in the patient’s gait also may be noted.

Marked motor and sensory disturbances are the hallmarks of occlusion of the middle cerebral artery. They occur on the side of the body contralateral to the side of the lesion and usually are worse in the arm and face than the leg.

Pathology in the vertebrobasilar system (ie. posterior circulation strokes) can cause the widest variety of symptoms and as a result may be the most difficult to diagnose.

The symptoms reflect cranial nerve deficits, cerebellar involvement, and involvement of neurosensory tracts. The brainstem also contains the reticular activating system, which is responsible for mediating consciousness, and the emesis centers. Unlike those with anterior circulation strokes, patients with posterior circulation stroke can have loss of consciousness and frequently have nausea and vomiting.

The posterior cerebral artery supplies portions of the parietal and occipital lobes, so vision and thought processing are impaired. One of the more curious facets of this syndrome is that the patient may be unaware of any visual problem (visual neglect). Vertigo, syncope, diplopia, visual field defects, weakness, paralysis, dysarthria, dysphagia, spasticity, ataxia, or nystagmus may be associated with vertebrobasilar artery insufficiency.

A transient ischemic attack (TIA) was historically defined as a neurologic deficit with complete resolution within 24 hours; however, a portion of TIA cases have evidence of permanent brain ischemia on neuroimaging. Therefore, the American Heart Association (AHA) has adopted a tissue-based definition: A transient episode of neurologic dysfunction caused by focal brain, spinal cord, or retinal ischemia, without acute infarction.”

NB: No time window is given!

6) What is the risk of stroke after TIA?

TIAs constitute an important warning sign for the future development of cerebral infarction. Approximately 10% of the patients who experience a TIA will experience a stroke within 3 months of the sentinel event, and one-half of these occur within the first 2 days.

7) How do you risk stratify a patient presenting with TIA?

A simple but suboptimal assessment called the ABCD2 score (ie. ABCD squared, for Age, Blood pressure, Clinical features, Duration of symptoms, and Diabetes) was designed to identify patients at high risk of ischemic stroke in the first seven days after TIA.

It’s frowned upon because it was designed for the primary care setting and doesn’t do a very good job in predicting who is high or low risk in real life. Check out this 2015 systematic review: https://www.ncbi.nlm.nih.gov/pubmed?term=26136519

Anyway, it seems to be all we have to work with in the ER…. 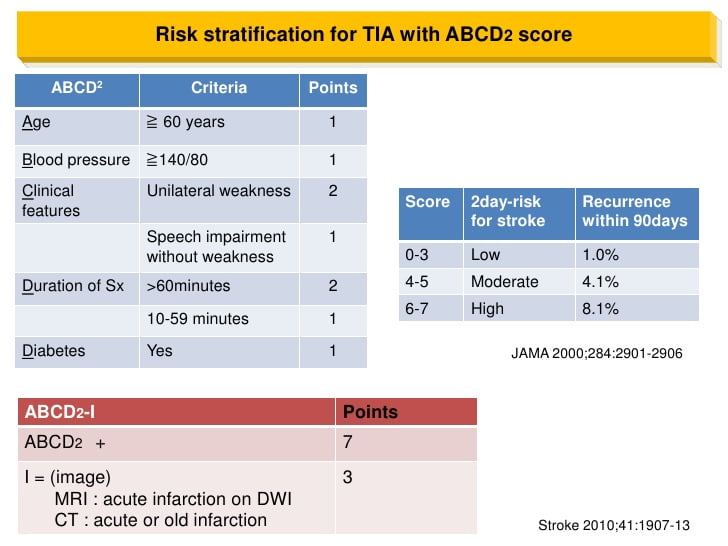 8) Describe the management of high-risk TIA and low-risk TIA; how does the presence of carotid stenosis change management?

Patients with new-onset TIAs should receive an expedited evaluation and treatment owing to the substantial short-term risk of stroke and other adverse events. Emergency neuroimaging, vascular imaging (such as with a carotid doppler study, MRA, or CTA), electrocardiography, and basic blood tests should be performed. A medically or surgically treatable cause for TIAs (eg. high-grade carotid stenosis, mural thrombus) should be sought, which would require in-hospital treatment such as anticoagulation, stenting, or carotid endarterectomy.

As per the Canadian Best practise guidelines here we should be starting patients with TIAs in the ED on antiplatelet therapy (as long as they have no contraindications). The NNT for this is 77. ASA alone if not currently on antiplatelet. Add second antiplatelet agent (eg. plavix plus ASA) if already on single agent and had a TIA.

The more recent CHANCE trial found that dual antiplatelet therapy with aspirin and clopidogrel for 90 days significantly reduced recurrent stroke (from 11.7% to 8.2%) in patients initially presenting with high-risk TIA or mild stroke (NIHSS below 4). Aspirin should not be given for the first 24 hours to patients who have received a fibrinolytic agent and not until a swallowing study has been performed – Rosen’s 9th Ed.

9) What are the NINDS recommended stroke evaluation target times for potential thrombolytic candidates?

10) When should you consider thrombolysis in patients presenting with stroke?

Outline the management for a pt with ischemic stroke who is not eligible to receive thrombolysis.

11) Describe the main patient groups, target levels and medications for emergency antihypertensive therapy for acute ischemic stroke (stroke patient with and without potential for reperfusion therapy)

This is controversial. Not a solid based of data to back these guidelines up.

Here are the big patient groups:

For the latter group management of hypertension in patients with acute ischemic stroke, oral or parenteral agents are withheld unless the patient’s:

For the groups where aggressive lowering of BP is indicated, such as when fibrinolytic therapy is planned (See Box 91.2):

If patient is eligible for treatment with rtPA or other acute reperfusion intervention:

12) What are the inclusion criteria for fibrinolytic therapy in stroke?

13) What are the AHA exclusion criteria for fibrinolytic therapy in stroke?

14) What are the inclusion and relative exclusion criteria for acute ischemic stroke in the 3-4.5 hr time window?

15) What is the dosing strategy for rtPA?

The recommended dose for rtPA is 0.9 mg/kg IV to a maximum of 90 mg (10% of the dose given as a bolus followed by an infusion lasting 60 minutes).

The current consensus regarding management of ICH is to provide antihypertensive treatment with parenteral agents for systolic pressures higher than 160 to 180 mm Hg or MAP higher than 130 mm Hg. Recommended agents include labetalol, esmolol, nicardipine, clevidipine, and hydralazine.

A few things to know about:

18) What are poor prognostic factors for ICH? What is a short formula for calculating ICH volume? 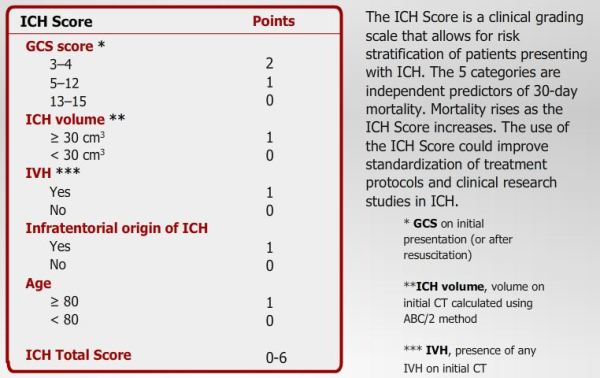 2) Differentiate between Wernicke’s and Broca’s aphasia

Aphasia may be expressive, receptive, or a combination of both. Wernicke’s aphasia occurs when the patient is unable to process sensory input, such as speech, and thus fails to understand verbal communication (receptive aphasia). Broca’s aphasia refers to the inability to communicate verbally in an effective way, even though understanding may be intact (expressive aphasia). 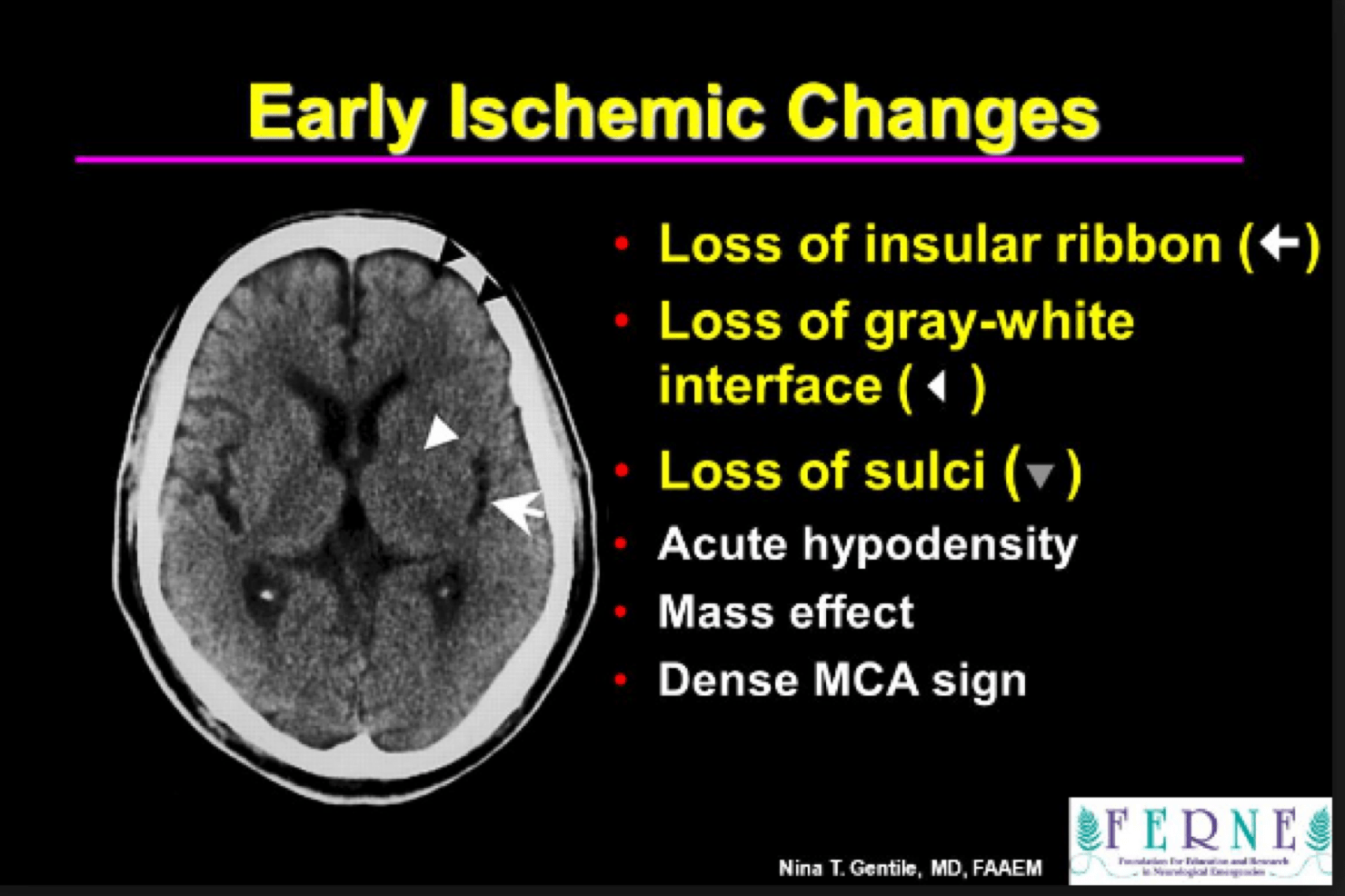 In addition, CTA can be used to identify the presence of intravascular thrombosis, vasculature dissection, or stenosis. In cases in which arterial dissection is suspected, imaging with MRA or CTA is indicated.

4) What were the exclusion criteria in ECASS III?

Bottom line: patients with severe strokes were excluded from the trial

5) What did the NINDS trial show?

The inclusion criteria are easy:

The exclusion criteria are a beast, let’s break them down into “absolute” and “relative”

The aggregate risk of symptomatic ICH is about 6% in trials and observational studies, for people who received tPA. (but this takes all comers into consideration – probably less in the young patient and higher in the older patient).

This posted was uploaded and copyedited by Andrew Guy