Episode 135 of CRACKCast covers Rosen’s 9th edition, Chapter 127, tuberculosis. TB, or not TB, that is the question. This episode will elucidate the early recognition, risk factors, therapy and precautions regarding this worldwide killer.

Think about this infection in anyone with constitutional symptoms!!!

Add this onto your DDX of hemoptysis

[1] Describe the 4 phases of TB infection

Acute infection is very often asymptomatic or, at most, vague. Exogenous reinfection looks just like primary or reactivation TB. Most clinical TB is from reactivation of dormant foci. Many ED patients with active pulmonary TB have no pulmonary symptoms.

[2] For how long is a patient with active TB considered infectious? What isolation strategies are there?

Infection control and the hospital environment

No restriction on the movement of patients with non-pulmonary disease

For circumstances in which a diagnosis of TB is established, airborne precautions (including use of aII room and masks) may be discontinued after antituberculous therapy has been administered for at least two weeks (with evidence of clinical improvement) and three subsequent negative sputum AFB smears

Refer to box 127.1 in Rosen’s 9th edition for the population groups with increased risk for tuberculosis

Populations with increased risk for tuberculosis:

Any of these groups who present with nonspecific symptoms with/without a fever should prompt you to think of TB!

Or put another way:

[6] Describe the role of the Mantoux test in screening for TB.  Who needs to be screened?  Who is positive at 5, 10, 15 mm induration?

>15mm – No risk factors or immunocompromised

Chest radiographic manifestations of primary disease in adults often are not recognized as TB. Primary tuberculous infiltrates can occur in any lobe. In any age group, a pneumonic infiltrate with enlarged hilar or mediastinal nodes should strongly suggest the diagnosis. The infiltrate usually is homogeneous and most commonly involves a single lobe. Thus, primary TB may appear radiographically identical to a bacterial pneumonia, with associated lymphadenopathy, if present, being the only distinguishing feature. 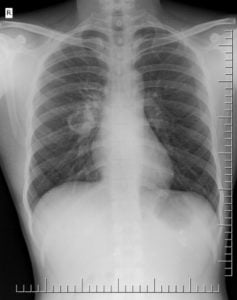 [9] List 6 DDx for pulmonary TB with their clinical findings

The term acute disseminated tuberculosis refers to active hematogenous spread of MTB to several organs in the body. The term miliary tuberculosis was first used to describe the pathologic lesions, which resemble small millet seeds. This is now used as a clinical term referring to the massive dissemination that leads to systemic illness. Miliary TB occurs when the host is unable to contain a recently acquired or dormant TB infection.

[11] Describe the management of massive hemoptysis in TB

[12] Describe an initial treatment strategy for active TB.  How does this change in children? Pregnancy? Extra-pulmonary TB?

Emergency clinicians generally will not initiate treatment prior to consulting public health and infectious diseases specialists. To be successful, treatment must be continuous, ongoing, and monitored closely. A one-time dose of medications is fruitless in a patient who could be lost to follow-up.

Rare situations where ED treatment may be needed:

RIPE for TB treatment otherwise the infection will spread to others!

[13] List indications for admission of the active TB patient

[14] Describe the management of accidental exposure to TB

“Tuberculin skin testing or IGRA blood testing usually is performed within days following exposure to establish whether the health care worker was previously infected with MTB. If the baseline test result is negative, a follow-up is performed 3 months later to determine whether conversion has occurred. The CDC has developed guidelines for the treatment of exposed personnel, which can be found on the CDC website.”

Refer to box 127.2 in Rosen’s 9th edition for a list of the risk factors for drug-resistant Mycobacterium tuberculosis infection

Plus: think about returning travelers from Africa or Asia

This post was uploaded and copyedited by Samuel Hogman