“Hidden stories” is a new series for Arts PRN challenging your observation skills. How many details can you notice? Can you weave together a story from this one still image? Don’t forget to check out more series featured on Arts PRN here.

Is the woman asleep, unconscious or dead?

The woman is lying on the grass in a right lateral decubitus position with her eyes closed. The open outdoor location, her abnormal posturing, and multiple laceration wounds reveal that she is unlikely asleep. Her skin appears to be normal in colour, so she is either unconscious, dying, or recently deceased. The dog at her feet has its head lowered, eyes closed, and ears drooping as if in mourning; the dogs in the background do not appear to take notice of this women so possibly the brown dog in the foreground is a beloved pet. The satyr to her left as well looks to be looking on sadly at the woman. Together, these clues point towards a recent death.1

Who is the woman?

She has smooth fair skin and a slender figure. There are no wrinkles to mar her face suggesting that she is a young woman, possibly in her teens or maybe early 20s. Her protruding abdomen could possibly indicate a pregnancy. Her clothing consists of a bright red rectangular linen with a lighter linen underneath, a sash, headdress and sandals, which is characteristic of garments in ancient Greece.

What events took place before the painting?

Her clothing has been unraveled to expose her breasts and abdomen, her sash untied, and her head cloth partially removed from her head. She sustained multiple lacerations of one to two inches each visible on her anterior neck, left lateral distal forearm and right palm; there are signs of previous active bleeding around the lacerations. There may be scratch marks noted on her left shoulder. These wounds were likely the result of a violent struggle. Her disrobed state suggest a possible sexual assault.

What is the cause of her death?

Based on these limb placements and the seemingly violent nature of her demise, the worst case scenario of her positioning is that she may be displaying hemiplegic decorticate posturing due to traumatic brain injury, hemorrhage or ischemia. As well, if we were to consider only her left arm involved, this woman’s decorticate posturing could be from a traumatic unilateral injury to the brain stem.

However, keeping in mind also the lacerations noted on her neck and arms, it could be a laceration causing the wrist drop noted in her arm; either radial nerve, tendon injury or C5/C6 involvement causing weakened wrist extension.3 Were she still alive, we would want to assess her motor ability in all four limbs to further differentiate the cause of her posture (if any).

What is the story? 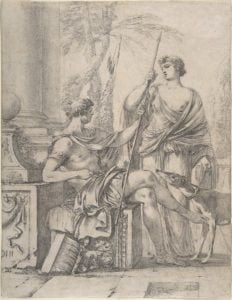 The woman in this painting is believed to be Procris, the wife of Cephalus, an avid hunter. Diana, the goddess of hunting, had gifted Procris a hound and spear that will always find its mark. An ever loving wife, she gifted this to Cephalus.

To mar their seeming bliss, Aurora, goddess of the dawn, fell in love with Cephalus. Cephalus, however, did not stray from Procris despite Aurora’s attempts. Aurora, jealous, whispered lies through the wind to Procris convincing her that Cephalus was indeed in love with someone else. At her wits end, Procris followed her husband on one of his hunting trips where she heard him whisper sweet-nothings to the air. Stricken by grief at supposedly finding proof of his infidelity, she choked back a sob in the bush she was hiding. Alarmed, Cephalus quickly threw his spear and, as promised, it found its mark. Unfortunately, it was not the hare he had in mind but alas his dear wife, Procris.6

It is said that this tale from Ovid’s Metamorphoses (which transpires over 15 books) inspired Cosimo to make this painting. However, there are obvious inconsistencies between the original story and its painting depiction. In Metamorphoses, there is no satyr (half man / half goat) – though, years later, Fabula di Cephalo, a play by Corregio, was written based off of Metamorphoses that features a satyr as the main culprit in the whole drama.7 It is thought that Cosimo incorporated both the play and original tale for inspiration of this painting.

One will note that the cuts this woman withheld are not the cuts that would be typical of a spear. It is possible that that Cosimo obtained a recently deceased cadaver (possibly from a violent sexual assault) and used her as the model for Procris.

Due to the unique dimensions of the painting, it is believed this painting is meant to be on a cassone, a highly prized large chest meant to be given to brides to place in their bridal suite, and may be an allegory warning against infidelity. 8 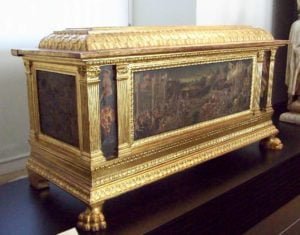 Cassone from the 15th century

No matter the inconsistencies that may be seen in this painting and the story it is supposedly based on, this painting will become one of Cosimo’s most famous works and is a sight to behold.

Have suggestions or comments? Have an idea for Arts PRN? Feel free to comment below or send as an email with your thoughts – we’d love to hear from you!