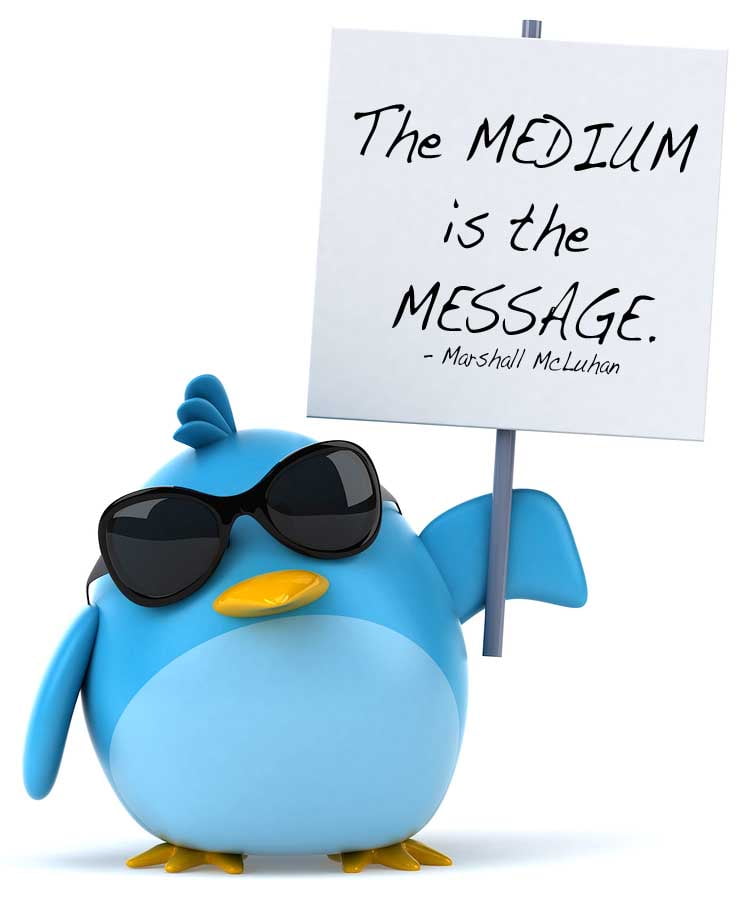 Dr. Christopher Labos (@drlabos) has confessed his hate for Twitter.  I would like to confess that I have fallen in love with it. Once again I find myself with a contrary opinion – I think tweeting and medicine go hand in hand – and thus, I have published my second BoringEM.org Counterpoint (see the first one here).

The great Canadian Media Guru Marshall McLuhan once wrote – “The medium is the message”.  This phrase was coined to explain how the FORM of a particular MEDIUM can influence how the MESSAGE is perceived.  Without getting into the specifics of epistemology, the medium in which a thought is communicated can have a great impact on the message received.  The phenomenon of misinterpretation by the lay person/mass media (that is of concern for Dr. Labos) is likely an artifact of exactly that effect.

As physicians on Twitter, Facebook, and other social media platforms, it is our job to be aware of the impact of our words in all forms.  Tweeting may be dangerous if we are not explaining ourselves well.   This phenomenon, however, is not restricted to Twitter.  It happens on many other media platforms (TV shows, Newspapers, Magazines).   In fact, this likely happens on a daily basis when we are discharging patients, discussing options for care or writing a letter to the editor in a local newspaper.  The Doctor-Patient or Doctor-Public relationship can be fraught with miscommunication and misinterpretation. 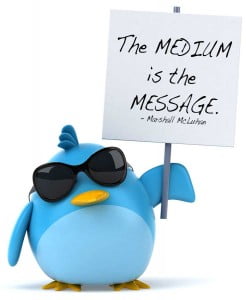 An example of using Twitter to take on misinformation was the center-point of a recent entry on the Forbes.com blog.

Dr. Bryan Vartabedian, a pediatric gastroenterologist at Texas Children’s Hospital, was recently shut out of posting a comment correcting some erroneous information on a CBS news affiliate’s broadcast/website.  In response he wrote a Blog and pushed his opinion through, publishing it via a Twitter blast (@Doctor_V).   Due to his Twitter presence (he has over 15,000 followers), his blog had an unprecedented uptake.  It showed up on my Facebook and Twitter walls multiple times over the initial few days after its original posting date.

As health care practitioners we all have to do our part to engage the public.  Some choose to do this one patient at a time, others might choose a wider forum.  Twitter is one way for an MD, RN, RT or Paramedic to help get the facts straight.  I think it is important for us all to learn how to engage the public BETTER so we can do good with our social media presence – rather than not doing it at all.  There is a lot of misinformation spread and we all have to do our part to educate those around us (both literally and virtually).

My Adventure in the Twitterverse

As a social media addict, I signed a personal contract (with myself) to keep from entering into the world of Twitter for the last year.  I had heard many great things about the Twitterverse – How it was a great way a) to get CME, b) to exchange ideas, c) to receive information in a ‘push’ rather than ‘pull’ format…

However, last year was my Royal College Exam Year and I forbade myself from becoming engaged.  Facebook was already eating up enough of my free non-work, non-study time and another social media platform was unlikely to be of benefit to my scholarly activities.  And so, I banned myself one day after signing up for my Twitter Account (@TChanMD).

A year later, my self-inflicted ban was over – and into the Twitterverse I ventured.  Now, I regret not getting on Twitter earlier.

I lament not knowing about all the Free Open Access Medical Education (#FOAMed; a.k.a. #FOAM) resources that are available earlier.  From Rahul Patwari’s EBM youtube education series to a recent article on ‘Diagnosing the Learner in Difficulty,’ the phenomenon of physicians being informally educated on the internet is spreading and has even made waves in the traditional literature.

Contrary to Dr. Labos’ thoughts, I think that Twitter’s brevity actually is a key point to its success as a CME platform.  Busy doctors need bits and bytes that we can chew on while eating our sandwich and walking to our next pit stop!  I find the ability to scan 10 tweets between my walk from the cafeteria back to the ED and learn about a new paper to be simply amazing!

Beyond CME, I know that many of my colleagues have had great success connecting directly with educators and researchers about medical literature that they are interested. Personally, I have  engaged with those who had questions about my own research.

Moreover, recently, studies have shown that in the first few days of the release of a paper, Twitter activity is predictive of future citations!  The power of dissemination through micro-blogging platforms like Twitter are likely still untapped for many of our clinician and researcher colleagues.

Overcoming Limitations of the Medium: 3 Hints

Instead of throwing the proverbial baby with the bathwater, I now will present some additional hints that might help us all tweet with more success.

His point of view is that Twitter is bad because its too brief – and that people are jumping to conclusions quickly.  And yes, there are hazards to that.  But most of the people I follow on twitter have overcome that by integrating links into their Tweets.

As an MD, don’t be afraid to tweet with citations.  Link your articles/references to your tweet.  If you run out of characters, consider using a link-shortening service (e.g. Tinyurl, Bitly) to take a long website link (e.g. a Pubmed link) and turn it into a short link!

2)  If you have MORE to say than 140 characters… TwitLonger!

This external app run by @stuartgibson allows users to write a longer post. I’m not sure if the esteemed Dr. Labos knows about it… But based on his rant in the Gazette, I think he might really like it.

I said it above, but I’ll say it again:  It’s important to watch and mean what you say.  As a health care practitioners, your friends/family have always trusted you.  Undoubtedly, you have had to modify your off the cuff statements at family gatherings or social events.  On Twitter, your dinner table gets much bigger.  As Greysen et al. noted, we should always be wary of our ‘digital footprint’ Remember, what you say matters and it can have a lasting online presence.