An 18 month female named Ella presents to the ED with a 1-day history of multiple intermittent episodes of abdominal pain (lasting ~5-10 minutes each) where she pulls into a knee-chest position, in addition to episodes of non-bloody, non-bilious emesis after her last 3 meals. Her appetite has been poor. Her bowel movements have been normal, with no diarrhea or hematochezia. There have been no unusual ingestions, no sick contacts, and no recent travel. There are no urinary tract symptoms or skin rashes. Her past medical history is unremarkable and she was born SVD at normal term. Her vaccinations are up to date. Vitals are all within normal limits, and clinically she is well hydrated. On examination, you believe you may have palpated a “squishy” mass that is 2 x 1 cm in the RUQ that causes Ella to cry.

What is your differential diagnosis in this case? 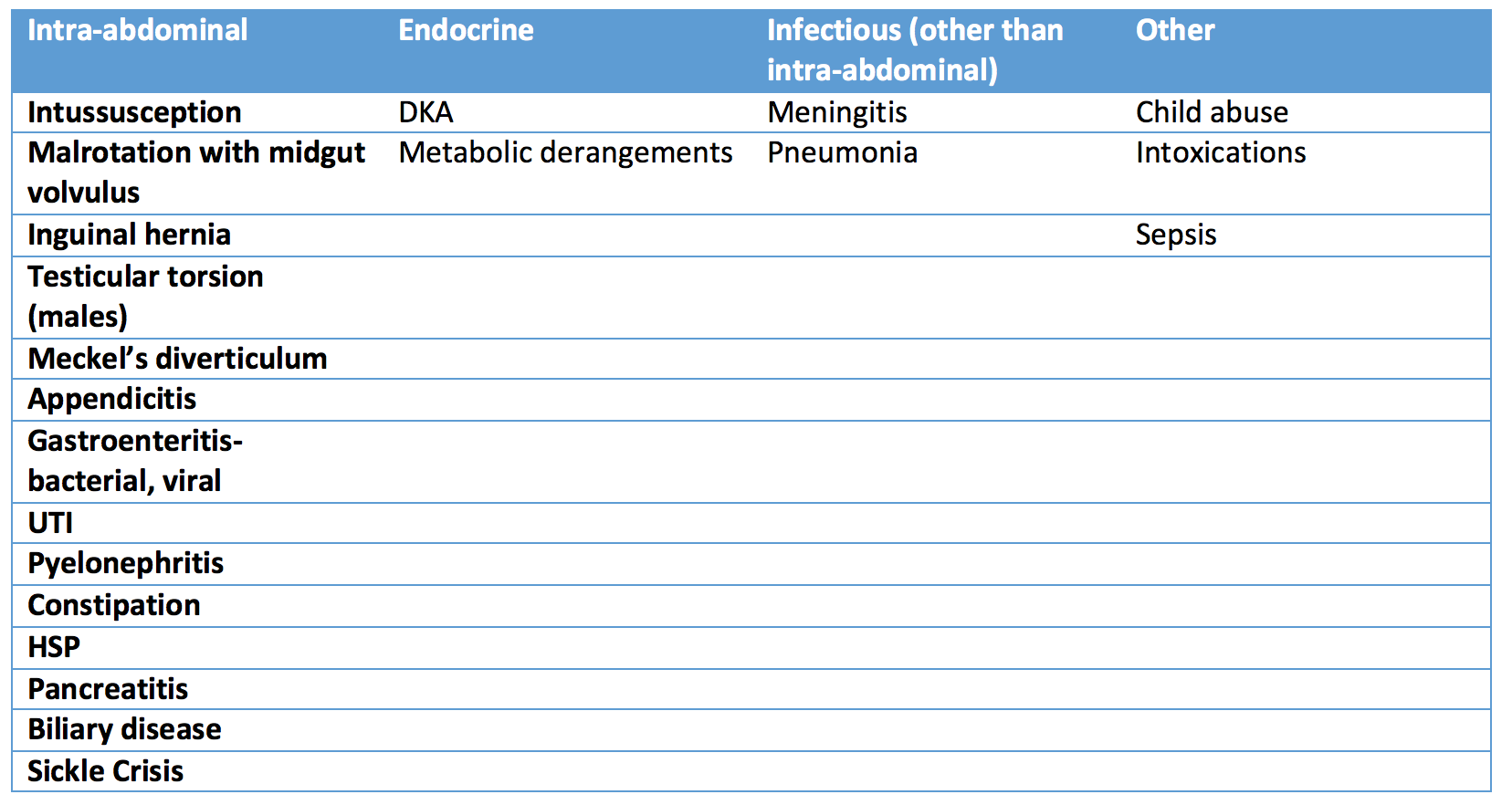 Intussusception is the most common abdominal emergency of early childhood, and is usually idiopathic. The word intussusception refers to the invagination of intestine into a subsequent segment4. During this process, blood supply to the bowel can be compromised and transition from tissue ischemia to necrosis and perforation.

The vast majority of cases (80%) occur in children under 2 years, with the most frequent ages being 5-10 months.1 However, don’t be fooled, as it is rare but also possible to get intussusception in adulthood!

What is the Intussusception “classic triad” and what percentage of patients is it found in?

The “classic triad” consists of:

The triad is only found in ~21% of patients2

Intussusception refers to the “telescoping” or invagination of one part of the intestine into another. Ileocolic is the most common type of intussusception. This is when the terminal ileum intussuscepts through the ileocecal valve into the colon. Some other types of intussusception are ileoileal, colocolic, and ileoileocolic.3 Anatomical lead points occur in approximately 10% of intussusceptions, examples being Meckel’s diverticulum, enlarged lymph glands (i.e. Peyer’s patch) polyps, inflamed appendix, neoplasm (i.e. lymphoma).

What is the relation between HSP and intussusception?

Henloch-Schonlein Purpura (HSP) is a IgA mediated small-vessel systemic vasculitis. Intussusception is the most common GI complication of HSP. Submucosal hematoma or edema of the small bowel can act as a pathologic lead point, contributing to intussusception. In HSP, intussusception has a predilection to small bowel as opposed to idiopathic intussusception which typically is ileocolic.4

What are the ultrasound findings of intussusception? 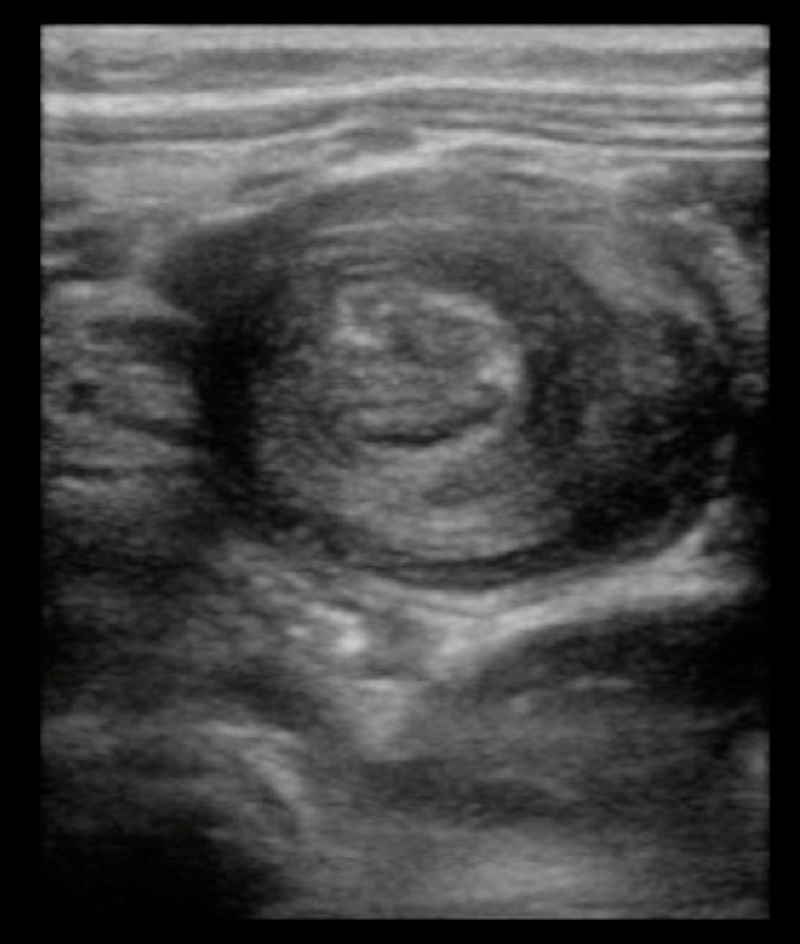 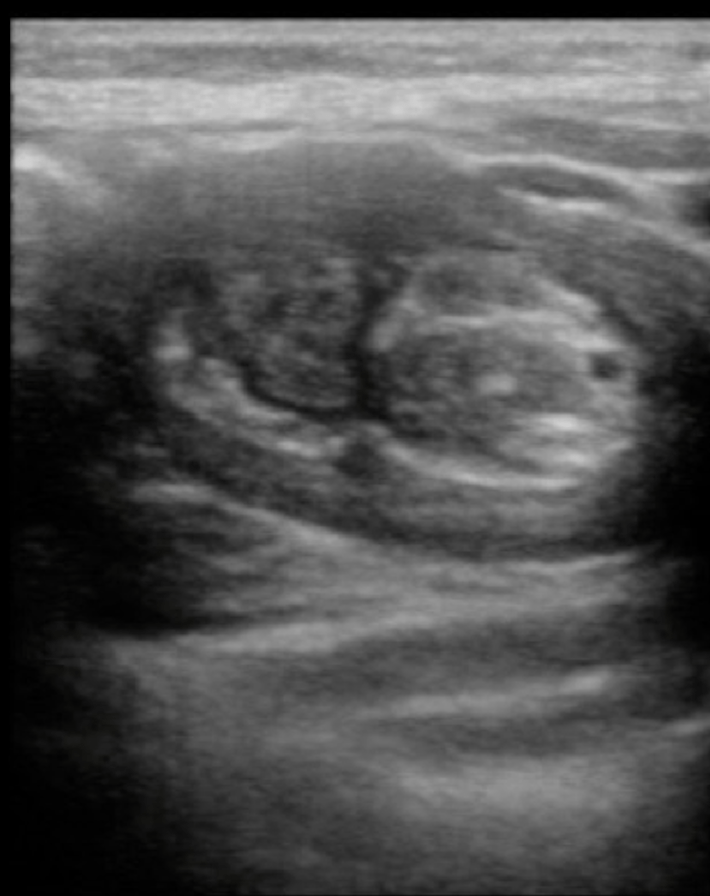 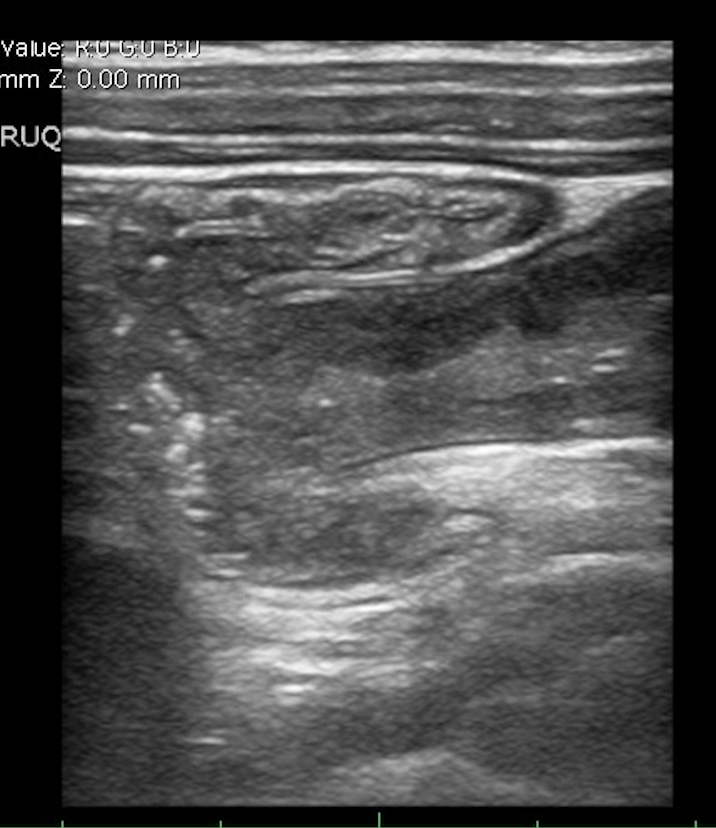 What are the intussusception findings on Abdominal X-Rays?

To manage a presumed intussusception:

Recurrence will occur for 1/10 children with intussusception, with early recurrence (in 4-6 hours) in 2/100.2 Recurrence will be higher in patients who have a pathological lead point. These should also be managed in a non-operative fashion if there is no bowel necrosis. If there is even a small suspicion of bowel necrosis or failure to tolerate oral intake, the patient should be admitted for further in-hospital management.

Back to the Case:

The team ordered Ella a CBC and urinalysis which were both normal, in addition to an abdominal ultrasound and plain films to investigate the palpated mass. A target lesion was visualized on the ultrasound. There were no signs of bowel obstruction, perforation, or abnormalities on AXR. Radiology was consulted to perform an ultrasound guided air-enema study after the stomach was decompressed with a NG tube. This was done successfully, and Ella was kept overnight for monitoring post-procedure and was discharged home in the morning.

Editor’s note: This post is the third in a series led by Drs. Ashley Lubberdink and Kaif Pardhan translating the pediatric guidelines that have been developed by TREKK (TRanslating Emergency Knowledge for Kids). For more information and further pediatric emergency medicine guidelines, please visit the TREKK website.

This case highlights the importance of considering intussusception in your differential diagnosis when evaluating abdominal pain in young children. Intussusception can be easily confused with simple gastroenteritis in children under two who are vomiting and unable to convey the intermittent nature of their abdominal pain. The astute clinician will keep in mind that the classic “currant jelly” stools are a late finding in intussusception and should not be relied upon to make the diagnosis. The vignette describes a palpable “squishy” mass in the RUQ, which can be a clinical finding in intussusception, but should also not be relied on, as in practice this is often not apparent. Another important point to consider is that not infrequently intussusception presents as altered mental status and/or listlessness in young children with the condition. When intussusception presents like this it can masquerade as sepsis, CNS pathology, or possibly exploratory ingestion. Again, it is imperative that the emergency room provider consider the diagnosis of intussusception in these patients lest the diagnosis be missed.

Ultrasound is the diagnostic modality of choice for intussusception. Plain radiographs may, at times, pick up cases of intussusception but are not to be relied upon when the diagnosis is suspected. It is nevertheless important that we continue to educate providers on the target and crescent signs of plain radiographs in the not uncommon event these findings are found incidentally while pursuing an alternative diagnosis. Prompt reduction via air enema is important to prevent the rare but important complication of bowel perforation. Recurrence occurs in 10% of patients with the majority of recurrences occurring beyond 6 hours. Because early recurrence is rare, it is not beneficial to complete an observation period in the emergency department following successful reduction in a patient who is tolerating oral fluids and otherwise well. The patient in the vignette was admitted overnight for observation, but one could have made a sound argument based on the available literature that discharge from the emergency department would have been acceptable and safe following successful reduction.

The bottom line is that intussusception is a very treatable condition, but it is the responsibility of the emergency room physician to consider this diagnosis so as not to delay appropriate interventions.

Ashley completed her MD degree at the University of Toronto and is doing her residency at McMaster University in the FRCPC EM program. She has special interests in Paediatric EM and Medical Education.